A critical element that always has to get organized, well in advance of any Speedhunters' event visit, is trackside access. This often involves writing letters, sending faxes and filling out online accreditation forms. It can be a lot of work, but you really can't attend a motorsports event without special permission to access the restricted access areas. It's the only way to shoot professional quality photos and video footage.

Once you are at an event you also need to plan out where you are going to shoot and make sure you are ready with your camera set up before the cars hit the track. So while attending the WTTC Imola round as special guests of BMW Motorsport, Dino and I knew we wanted to shoot one of the races from turn 1…the Tamburello corner.

Now this is also the exact place where Ayrton Senna's life came to a premature ending on a fateful day in 1994.

We heard there was a memorial to Senna at the corner, but weren't sure what it was going to look like… a plaque maybe? Anyway we set off to Tamburello an hour or so before the start of the WTCC race.

BTW, part of getting in position to shoot car racing, involves finding out how to access the trackside areas. This is normally a bit of an adventure in itself as every track has special gates you have to find to get into circuit.

So after hiking down several access roads and trails we eventually managed to get access to the restricted areas behind Turn one… Tamburello corner.

And this is what we found…

This plaque commemorates Senna and shows his likeness along with some cars driving along a "S" shape. This was somewhat expected.

But what I was not prepared for was all the tributes that people had left at the site.

I suppose if you consider what an icon the man was, I really shouldn't be surprized. Senna was as mesmerizing character as he was a formidable and competitive racing driver.

Each tribute had a deeply personal tone. I couldn't understand the language, but no doubt Senna touched many people's lives and inspired a new generation of racing drivers.

These dead Sunflowers zip tied to the fencing are a fitting statement to the fallen. I can only imagine that these people must have broken into the track at night to leave these mementos behind.

Tied to the fence behind the restricted area, some people had left a Brazilian Flag. Given the faded colours, it must have been hanging there for years,

Also fading away, are these photographs depicting different aspects of Senna's career.

Nearby someone has left a laminated picture of Senna's grave.

All along the back of the fence posts people have writen their own messages to Senna. Goodbye Champion…

I do wonder for how many years and decades this adoration for Senna will last… As long as he remains in living memory perhaps? If we were to visit the memorial to Jim Clark at Hockenheim would we find the same outpouring of emotion? He was the Senna of his time so I wonder if the site holds the same sense of loss.

This message was left as far back as 1995…. These little notes seem to me like a way for these race fans to process the grief they felt when the great champion passed away.

Dino and I decided to leave our own mark on the spot as a form of respect to the great champion.

A few different parties had left stickers at the site… so we decided to add our own.

It was a moment to pause and cast our thoughts to the memory of Senna, before picking up our camera gear to find a spot to shoot the start of the WTCC race. 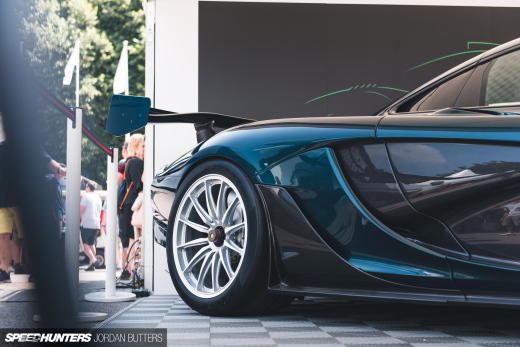 I am Brazilian and I am daily reader of Speedhunters. I was very excited and happy to see this story on the memorial of Senna, a memorial that not everyone knows that. Even amid last shame with Nelson Piquet at Renault, it's always good to remember that Brazil has had good drivers like Senna, on behalf of the Brazilians who enjoy racing and speed Speedhunters ... thank you!

I just to this day cannot understand why they did nothing about that corner. Senna pleaded and protested during the 94 season leading up to Imola saying that Tamburello was too fast and dangerous and that someone would get hurt, but nobody seemed to care? I have not been able to find out much about the governing bodies response to his claims; but you would think if one of the most consistently great drivers of all time and certainly the best driver of that time told you a corner was too dangerous, that one would take his word for it! RIP Ayrton

Senna was/is my favorite driver of all time. After seeing this post, I know that I will have to visit this spot in person.

@ Felipe after reading the facts in the Nelson Piquet Jr. situation with Renault, i have to beleive its was Briatore who is to be blamed, Nelson Sr. was protecting his son, Briatore is an arrogant, self promoting ahole....too bad the career of a young (not too talented) driver is ruined because of him, and the reputation of one of F1's greatest drivers Piquet Sr. has been damaged.....Alonso is also a big question mark because he is managed by Briatore, and the FIA has ruled that no drivers managed by Briatore is eligible for a F1 license........

this pictures makes me cry....

i was there in imola last year and this memorial is just amazing... i cried aswell..

Thank you. That was a very powerfull statement.

RIP Senna. You are not forgotten.

For me the best F1 driver ever. SENNINHA 1#

I agree with you Roger Bent, one of the best Brazilian drivers at this moment on F1 is Rubens Barrichello, i was hoping we would be champion this year, but Brawn prefers "Helping" Button, just like in ferrari .

Formula 1 this year is amazing lol, let´s se what happens next year...maybe force india wins the championship... WTF is going on...

I remember how it was when senna died. The country stopped, I think it was for us something like the death of diana was to the brits

Absolutely powerful post...thanks for sharing it on Speedhunters.

In the Philippines, most people here normally look up to Schumacher as their motorsports idol abroad...not me. There were other great motorsport icons like Makinnen in WRC, Hakinnen in F1 and Masuoka in Dakar, not to mention our local heroes like Dodjie Laurel and Pocholo Ramirez (may their souls rest in peace). For me, Senna was a greater success than Schumacher. He was a champion with his own skill and talent, and was never "helped" to win races unlike some F1 teams today.

Thanks for posting this...

Congratulations boys, you're the bests!!! Ayrton... we miss you

He saved another mans life. To stop your car on track and risk your live to save another.People come frist not the race that is a true champion.He was a hero then and still is a hero now. Ayrton Senna you will live on forever. Us SpeedHunters will make sure you do and thank you.

Black Sunday never leaves our minds and it never will. We will never forget you.

RIP Aryton Senna. I wish I could have an NSX in his memory.

You tagged your website's logo on someone's memorial... as a sign of respect? Are you SERIOUS?

That is truly in horrible taste. Leave your advertising off of what is nearly someone's tombstone.

I suppose the sticker was a sign of respect from all the people behind SPEEDHUNTERS.com project.

I feel represented of it, as daily reader of this blog.

The writings on the air-spray helmet say:

Ayrton we miss you! RIP

Thanks for that post, it was truly very incredible.

RIP to the best.

Senna Flogging a NSX-R around in loafers:

I remember watching this race when i was three years old, and my mom tells me that my love of cars began the first time i watched him race. I don't remember many races because i was so little, but i do remember that race, i remember crying for hours after that race. I don't think many realized that he was not only a great racer hes was also a great person. Thank you Senna for the inspiration you gave me. I don't think my love for cars would be as great without this LEGEND

@Rafael, Happy and I'm surprised to see that not only I have a Brazilian here in Speedhunters...

I remember that day. My whole family was sitting, watchin' TV in the morning that Sunday. I remember arriving at the Senna curve and out of the path.

But I prefer to remember him as a hero of our country. A pilot with unique talent. It was a great loss for us, Brazilians, but showed how one can be a spectacular and amazing person, inside and outside lanes.

From a another Brazilian fan of Speedhunters.

Thanks for this post!!! Senna is the best o the best!!

f1fan09 it was at a respectful distance to the memorial itself...