"Blow,Winds and crack your cheeks! Rage! Blow! You cataracts and hurricanoes, spout til you have drenched our steeples, drown'd the cocks!"

I did not actually see King Lear out in the storms that hit Road Atlanta during the middle of the Petit Le Mans last Saturday but I saw plenty of candidates for the role of the Fool, me for one. Sitting in the warm, dry media centre contemplating a two hour session in the pit lane, I looked at the weather radar on John Dagys' computer and could see an angry mess heading our way. Instead of staying put I dragged young John and myself out into the elements and round to Turns 6 and 7. I was in search of the photographer's Holy Grail, a bit of magic that might light up the otherwise deadly dull skies that had plagued the 2009 Petit Le Mans right from the start.

There had been no shortage of drama in the race right from the moment engines were fired up…………………….

On the first warm up lap Stephane Sarrazin managed to give himself and Peugeot management a near heart attack by spearing his 908 HDI FAP off the road, over the grass and onto the pit lane exit………………he managed to hang on and recovered his place……………..Sarrazin has raced in Formula One and was a factory driver with Subaru in the World Rally Championship, if he was finding things difficult then conditions must be bad.

Of course this indiscretion will have brought a smile to the driver of the #2 Audi……………give Allan McNish a millimetre and he will take a mile…………….

Knowing that the #08 Peugeot would have to tread carefully till the tyres got rid of any mud and crap picked up off piste, McNish concentrated his efforts on Nic Minassian in the pole sitting #07 Peugeot. Perhaps he sensed that the Audi was going to have an advantage in the conditions over the otherwise faster Peugeot. And if he was to exploit that advantage he needed to get past at the first corner…………..desperate times call for desperate measures.

Jinking left while barreling down the Start Line Straight into the gap left by Sarrazin, McNish was in the prime position to sling shot past the lead Peugeot through Turn 1 and up the hill to 2 and 3.

Amazing, without a shot being fired McNish and the Audi were in the lead, this despite the pace that Peugeot had shown all the way through practice.  The French pair were relegated to a supporting role.

Into lap 2 and the Wee Scot was pulling away from the rest of the field as if they were parked…………….this was not in the script, the 908s were meant to dominate………truly for some men, nothing is written unless they write it…………..

For the next hour and a half McNish piled on the pressure…………….pulling away from the Peugeots by a second or two a lap. 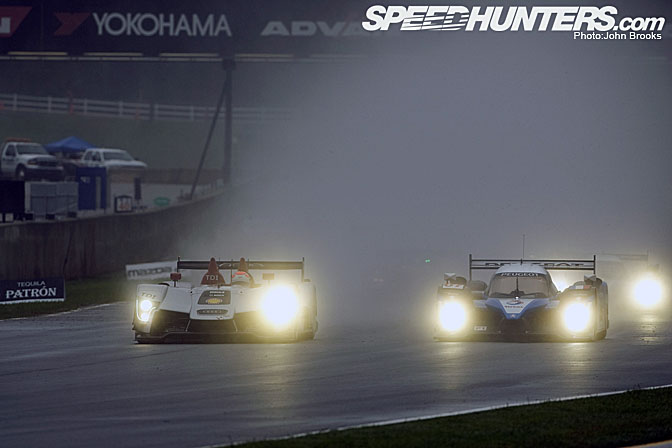 To reinforce the message, Marco Werner in the #1 Audi breezed past Minassian soon after McNish and also headed up the road. It was going to be a long day for the French team.

While competition was fierce at the front it was nothing compared with the scrap that was happening back in the GT2 class. Pole sitter David Murry in the Ford GT MK7 led from the start but the train of factory cars led by the Corvettes soon closed and eventually the privateer had to give way to the factory Detroit Muscle.

After years of dominating the GT1 category, the Pratt & Miller Corvettes look set to repeat the process in GT2.

Not that the Porsches were giving them an easy ride both Farnbacher Loles and Flying Lizard kept in contention.

The Risi Competitzione Ferrari 430 was also in the mix, the race was going to turn on who managed the conditions best.

The two BMWs also stayed in the hunt during the early stages of the race until an oil leak delayed the #90 car.

Nearing the end of his second stint, McNish was a few car lengths behind the lead Peugeot of Pedro Lamy and about to put them a lap down when the first break came the French team's way. After the rear deck blew off the Ford GT down the back straight a full course yellow was called and all the advantage that the Scot had accrued went down the Swanee……….it was back to square one.

LMP2 was the class that no one wanted to win. A gutsy drive by Klaus Graf took the Cytosport Porsche up to 5th overall (and past one of the Peugeots) during the early wet phase but he spun on his out lap after taking on slicks, then struggled to get the Spyder restarted.

Out in front by a country mile was the Guy Smith/Chris Dyson Lola Mazda. However this entry was not eligible to be classified as it was running a new bio-butanol fuel in anticipation of the 2010 rules.

Usually at the front of LMP2, the Fernandez Acura suffered with repeated steering problems which severely delayed progress.

All of which left the second Dyson Lola Mazda in command of the class. Marino Franchitti, Butch Leitzinger and Ben Devlin emerging on top despite losing 12 laps in the pits with a transmission problem.

It was a day of mixed fortunes for the two LMP1 Acura teams. Gil de Ferran challenged the Peugeots early on but then fell victim to a rash move by Jon Field's Lola. A second shunt while Scott Dixon was on board put them 48 laps down and now they will struggle to take the ALMS LMP1 teams' title.

After the disaster in practice when Scott Sharp destroyed the Acura, there was some reward for the all nighter that the crew pulled rebuilding the car as Sharp, Dario Franchitti and David Brabham had a steady run to 6th place.

The Drayson Lola Judd also ran well until a component failure resulted in the loss of a wheel pitching Rob Bell into the wall. He manged to get the three-wheeler back to the pits and they continued on.

All of which left the ORECA to win the petrol LMP1 class with a steady run to 5th place overall for Nicolas Lapierre, Olivier Panis and Romain Dumas.

At around four hours into the race the storms hit Road Atlanta with a vengeance, making several turns almost impossible.

The rain abated briefly but then the skies darkened and the thunder came. McNish was leading at the time and on the radio demanding that a red flag be thrown, then he spun while behind the Safety Car promoting the following Peugeots into the top two spots. With the thunder came lightning……….so for the sakes of the corner workers the race was suspended.

It was not only the corner workers that were at risk……………a 500mm lens on a metal monopd would also make a handy conductor for any passing lightning bolt.

Intelligent driving and good anticipation led to the Risi Ferrari going to full wets before the rest of the GT2 pack and this helped them jump from fourth to first. Another win for the top GT2 team this year.

So this is how Petit Le Mans 2009 style ended. The field was parked up next to the pit wall under covers awaiting "the restart".

It was a monumental waste of four hours. A look at the radar screen would confirm that the rain was not going to stop soon and given the sodden condition of the soil, flooded to to bursting point over the past week or so, there was nowhere for the water to go. We all sat around in states that ranged from damp to soaked………guess which end of that spectrum I was?

McNish and Sarrazin toured the circuit in the Official Cayenne but nothing had really changed on the dangerous bits…………..plus now it was dark. Any other course than ending the race would have been madness, inviting trouble with a capital T.

And then the race ended…………..the podium ceremony.

All a bit flat really.

The 2009 Petit Le Mans was shaping to be a really great race to the finish……………..LMP1 had McNish and Capello able to take on the Peugeots, how that would have unfolded is anyone's guess. GT2 was even more wide open…………..we wuz robbed.

However the right decision was taken in halting the race……those of us on site will testify to that…….no doubt about it.

Longing For The Open Road

Project Cars: Knowing When To Stop

Why Horsepower Doesn’t Matter In 2019

@ John Brooks, is the Dyson car running a rotary?

I hope one day my photos are up to the caliber of the shots you've posted here. Really stunning work.

Roger, Dyson is in their first year with Mazda, the cars previously were campaigned by B-K Motorsports which shut down when the owner decided to retire last year. The Mazda support along with the cars were picked up by Dyson, they run an AER built turbo 4 based on the MZR used in the miata. B-K previously did use a 3 rotor, based on the old Mazda factory racing rotaries. This engine and actually the chassis as well are basically now the furai as I understand it.

John...the lead in shot is A M A Z I N G. Great coverage as always.

i wish i had been there x