You might remember my blog post in July finding the car to start my newest project, a road race/time attack/hill climb/who knows 1988 Mazda RX7, as promised here's the official part 1 of my EPIC (please note my pretentious and humorous tone here) RX7 race car build!

Over my break from work and after my eyes healed up from laser eye surgery I finally had some free time to get started on my new adventure. Step 1 is the messiest and dirtiest but pretty damn fun at times, the tear down…

The tear down actually started with another car, an S5/89 RX7 I bought off a co-worker for parts.

I offered up some free parts with the local Rotary club BCRotary, in exchange for a hand pulling the engine out of the S5 and I was genuinely amazed by the help I recieved. 3 members of the club came to help and grab some parts, and by the end of the day we had pulled 2 engines, 2 front subframes along with the suspension, and pretty much gutted the entire S5. I want to thank Dave, Ram, and Nick for all thier help, I was actually pretty useless since I had just had my eyes lasered a couple days before hand. 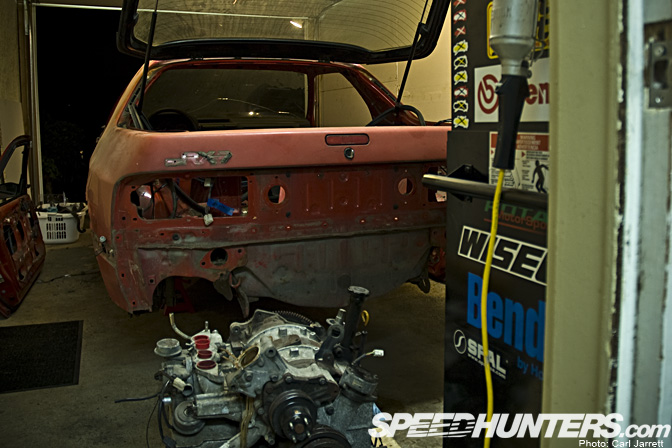 The S5's came with a bunch of great parts I'll need that made it logical for me to just pick up an entire car and pick it clean. The 89-91 FC's came with a slightly different mill, the S5 engine came with higher compression rotors which is what I'm after to throw in the S4 shell. The S5 had just a little more than 100k on the clock so I'm hoping the internals are still in good shape. This car being a GXL model with all the extra bits, it comes with 5 lug hubs and wheels as well as a awesome (for a stock production car from the 80's) braking system. 4 piston aluminum calipers up front and vented disc's all around, good enough for E-Prod race cars, good enough for me.

With all the heavy lifting out of the way, I began tearing into the '88. I've managed to get most of the way through it in my limited spare time, with just the rear suspension and dash needing to come out now. There are a few rusty spots but nothing major, and nothing some wide 'glass fenders won't hide. 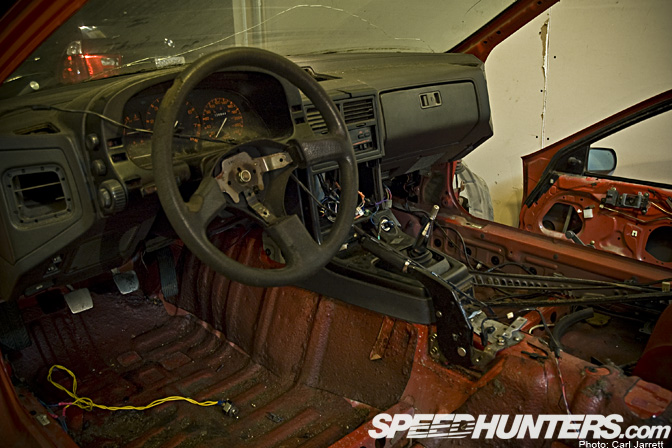 I'm not too familiar with these cars but I've been pretty surprised with how they were built. All of the FC generation RX-7's came with a pretty beefy 24"x5" stock aluminum oil cooler from the factory, along with the up-rated braking system, and optional clutch type LSD on certain models, made it a pretty serious car for the price back in the 80's and early 90's. Even the pedal box looks like a pretty nice piece of kit made of lightweight aluminum, remember, I'm used to 80's Ford products so the little things like these are a nice surprise.

So, what's next? Once I get the tub fully stripped of parts, I need to figure out if I'm going to get the chassis acid dipped, media blasted, or just do it all manually at home. Once I get that done, seam weld it up, and start building the cage thats going to keep me alive when I run out of talent out on a strip of asphalt somewhere.

This sort of project is definitely a first for me so bare with me as I learn a lot along the way. I'm currently also in the midst of planning what class this car will be built into, there is a lot to choose from, CACC, SCCA, NASA, but something along the lines of SCCA's E-Prod might be where it ends up. 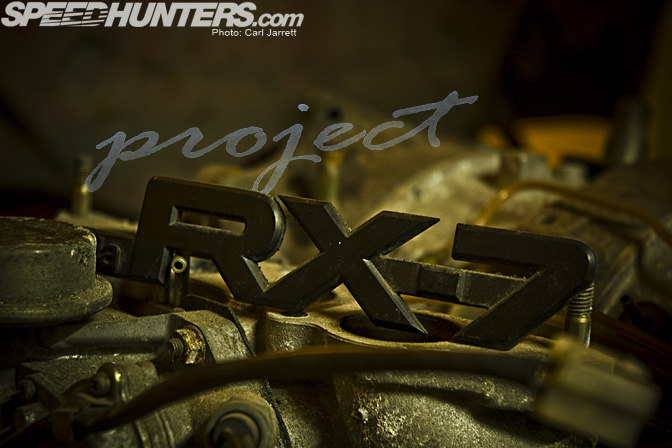 Cool! Goodluck with your build.

that's an NA engine you got there... you might want to get one from a TII (turbo engine) but that will require some engine loom work as cable trees of NA and turbo's are quite different.

check the forum http://www.rx7club.com for hours of tech info..

Looks like fun. just don't quite halfway through lol

Sweet! I love builds! Good luck with yours and can't wait to see what u come up with:D

Just remember to keep us posted.:)

Bring back the Cobra!!! jk

I probably missed something so can you tell me why you're using the S4 shell, not the S5? Good luck!

Looks great. As a new FB owner, I'm at about the same point you are. I'm really happy with my choice of projects, too.

As a fellow rotor head I would like to point out that your oiling mechanism is electrical rather than mechanical. Please check it and the compression of the rotor faces. If you are racing I would recommend a Mechanical OMP or premixing the fuel. Premixing is a PITA if you using the car for anything other than the track. Also if you can post photographic details regarding the seam welding, seam stitching, or joint riveting that you are using to stiffen the chassis I would be ecstatic. Remember if you Rivet and decide to DIY it you need Blind rivets not the pop style. Rivet diameter should always be 4x the thickness of the target sheet. Spacing of should also be no less than 4 rivet diameters. This applies to rows and adjacent rows. Never come within 2 diameters of the end of the sheet. Oops, tangent.

Patience and Persistance will always win the race.

uhm... the FD was the first to have the electrical OMP, FC's still had mechanical ones. allthough they are basically thesame engines (13B-RE/REW) the use the front sprocket under the front cover for different things.

You can also use adapters to feed oil to the OMP from a separate tank.

It's more logical to use clean 2 stroke oil to lubricate the rotor housings than engine oil which was never designed to burn anyway.

Sounds like fun.! do you know the price of an FD RX-7?

love the fc! im gonna buy one one of these days...

hey neal. actually the S5 (89-91) motors came with an electronic OMP. 88 and older were all mechanical.

Thanks guys, I will probably ditch the mechanical S4 OMP and go with pre-mixing as the 2 stroke oil will burn better and is suspended in the fuel better than regular motor oil.

I'm using the S4 shell instead of the S5 shell as it has no sunroof, its amazing the difference between how much bracing is in the roof of the sunroof model and the non-sunroof model, a lot of weight up there.

LOOKS LIKE ITS GOIN GOOD SO FAR , GOOD LUCK WIT THE BUILD , CANT WAIT TO SEE HER ALL DONE

Wow, I just got a GXL back in February in rare condition with just under 89,000 miles on the motor and transmission. My first car, always wanted one!

I'm stockpiling mods on a budget right now so I can build it up for street and drifting. It blew my mind when I discovered back in June somebody was going to finally do a project S4 FC3S that looked exactly like mine. Jealous!

As Docholiday has also confirmed the S5's, like our dear poster has, were operated vial electric pumps. There were sever changes made between the S4 and S5 models. Another major change between these models was the coversion from a flapper door Flow meter to resistor MAF. A burden many of us S4 stickers still deal with.

i am officially signing up and keeping track of this build progress. ^_^

Good luck and keep us updated. I am inspired by your build.

Contact Richard Sohn of Rotary Aviation. He'll get you a fantastic OMP adapter for not so much money, and then you can have a coool aluminium tank for two-stroke oil. Also, I'd recommend you put in some good Royal Purple oil in there, and change as often as you can afford if you're not going for a full rebuild. Mostly, changing oil when it smells gas and runs easily of the dipstick is a bit to late. And try to get some mor air force fed to that oil cooler. Even though it's big, on a small gymkhana style track mine couldn't really handle the temps all that well, but a fan should help adress that problem.

It looks like a cool project, but get lot's of dry ice if you're stripping that shell yourself. It's a lot of sound deadening in there. I'm a fire extuingisher service technician, so I've tried both heat and cooling down to get it off, cooling makes it all easier and less of a dirty job. If you get it cold enough, a hammer will make you get off big chunks at a time, and leave just a little bit of invisible glue on the underside, a lot easier to clean up for paint than if you're using heat.

Ooh, found a link by the way, http://www.rotaryaviation.com/oil_injector_pump_adaptors.htm

Neal, S5 FC's were actually the first to have the electrical OMP. How do I know? I have an S5 turbo in my garage right now...

Cool build up. Will definintely be following this!

Keep up the good work! I´ve already made this journey when i built my -88 TII with full rollcage and 13B REW conversion. Remember to have fun during the process:)

Carl nice to see you are going with the FC. I got to say GREAT choice man and you will be pleased with the chasis capability! If you need ANY info or help I have a plethra of informative websites and dealers/tuners that I can refer you to. Plus a little personal knowledge from all my years working with the FC and the 13BT platform. The more technical info and "no-no's" you are aware of the easier the hic-ups will be in your new time consuming rotary lifestyle. ha.

Here is a link to my build thread for shits and giggles: http://www.rx7club.com/showthread.php?t=694027&highlight=attention+deprived

Good luck and have some fun man!