I’ve been following the development of this car with some interest since the racing program was first announced and made sure that John Brooks took tons of snaps of the car at Sebring earlier this year. The debut of the new racing machine went quite well all things considered. Although both cars DNFed, Muller and Milner pushed it up to 2nd place before the M3 had to stop with a drive train issue.

I got to see the car only a few weeks later at the Long Beach ALMS race. By this time we’d already arranged permission from BMW to shoot the Driver’s Experience Films with Tommy Milner. In only its third race, Milner and Muller managed to nab the car’s first podium spot with a third place result…. A first place in  class was only a matter of time and this happened on August 16th with the cars sweeping the first two positions in GT2. The future certainly looks bright for the M3 GT2s!

So let’s now take an exclusive, detailed look under the skin of this beautiful race car.

Let’s start our tour inside the cockpit. The first thing you’ll notice in this shot is how far back and low the driver sits. A mockup of the factory dashboard is still in place, but the instrument panel has been extended backwards quite far.

This shot from Sebring shows the “back and low” seating position.

The seat on this car is much more that a regular racing bucket. It’s actually a rigid, partial survival cell of sorts and allows for the driver of the car to be lifted out of the machine in case of injury.

In fact, the M3 complies to all the latest safety standards… the carbon fiber roof is actually removable…. see the circular marking in the front center of the roof?…

…This is a perforation that can be punctured to allow for the roof to be peeled back for driver extraction. You can just make this out in front of the Dunlop Logo…

The center bar along the top of the windshield frame can also be unbolted, again to allow for easy access to the driver.

I thought it would be interesting to take a few photos right from the driver’s POV, so sat in the car to get this shot…. most of the switches on the wheel are pretty self explanatory.

To the right of the sequential shifter, is another bank of switches, as well as the radio…. to the left of the shifter, is the air conditioning duct. ACO rules state that the cockpit temperature on closed cockpit cars must not exceed 32 C so some engineering effort has gone into the development of this system.

Controlling cockpit temperature is also the main reason that the cockpit has been partitioned in half. It’s a smaller volume of space that needs to be cooled, so it’s going to tax the air conditioning system less. Clever!

My patent leather loafers look a little out of pace on the race pedals!

There are quite a few cables running every which way in the passenger area. One of the car’s mufflers is mounted under a tunnel marked by the silver insulation. They’ve needed to be channeled into these tunnels to allow for the M3’s extremely low ride height. There’s no room for any mufflers under the car.

In an effort to control heat, the exhaust pipes are place inside a insulation channel… you can also see the intakes for the rear transaxle oil coolers.

The air runs through these large ducts into the rear of the car…. you can see that much of the old production shell unibody has been removed… Minitubs have also been installed to clear the massive race slicks. Talk about precise and clean packaging!

Sandwiched between the unibody and the fully bellypan at the back of the car is a custom designed Xtrac 6 speed sequential gear box. It’s rear placement ensures optimized front/rear weight distribution.

The hot air then exits from the rear oil coolers out of the back of the car.

There’s no rear diffuser under the car, but the full bellypan does slope upwards under the rear bumper to create some under-body downforce.

Interestingly, the front third or so of the bellypan is made of steel… This acts as super-low ballast for the car and keeps the center of gravity as low as physically possible. Also very cunning….

The car has full race, double A-Arm suspension front and rear.. there’s no sign of any Macpherson struts to be found here! Check out how the wheel wells have been sealed up very tight… This is to control the air inside the wheel wells and the engine bay.

By the Long Beach race the lights themselves were yellow.

Although based on production units, the lights are up rated for the extra illumination needed for night racing.

Rims are by RAYS with special bespoke rubber being supplied by Dunlop. Also note how the air is expertly extracted from the wheel wells…

Some engineering effort has be put to the passage of air through the front radiator.

Here’s a closer look… the ducts running over the engine feed the air conditioner….

A detail of the same view which shows the air restrictor veins running to the engine’s air box…. it’s very tight packaging!

You can also get a feeling for just how far back the engine is mounted… There is a lot of room between the radiator and the front of the engine…. it’s also very, very low in the chassis…

One characteristic about the BMW M3 GT2, that a few people have mentioned to me, is that it’s a much larger car than the Porsches, Ferraris and Corvette it completes against. This means that it needs to punch a larger hole through the air than its rivals and therefore suffers from a lack of top speed. This is something that the ACO and ALMS will have to balance out over time with the use of weight ballast and restrictor changes to even out the playing field between the various cars.

If you guys live any where near Road Atlanta or Laguna Seca please do come out to have a look at these great racing cars. You won’t be disappointed!

… Catch this this glorious moment of GT racing while you can!….

Special thanks to BMW, the NFS marketing team and Rahal Letterman Racing for their help in the creation of this story.

A Carbon-Kitted M3 For Sweden’s Streets 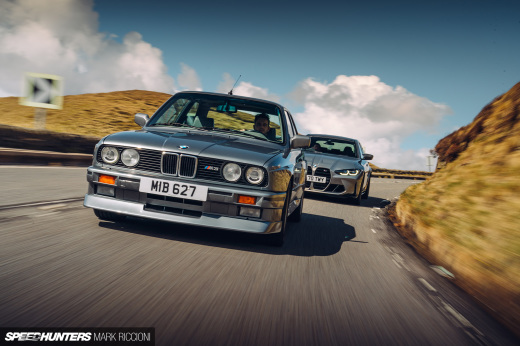 Celebrating 35 Years Of The BMW M3

Rod we need some wallpapers of this car!

The last one is gorgeous!

I would love to take that shot to the print shop to have it printed out.

Thats one sweet car. Thanks for the article. But you should really spend some time proofreading it. Either way, I enjoyed reading it. I'm loving BMW month. Especially all the old school bimmers. Keep up the good work!

i love how the volks look on it

oh can someone tell me whats the red pedal for

This post and the BTCC BMW Car feature the other day rocks!!!!

Are you doing a F1 GTR Car Feature from your Rahal Letterman visit?

Noticed some small mistakes too, but does not detract from a great detailed post. Thanks to you, John and Andy for these cool posts on BMW race cars past and present.

issac - the 'red pedal' looks like a foot rest to me. Rod may know, if not, we will try and find out tomorrow for you

Bit worried about the 'patent leather' loafers , great piece, Rod, and the news that Joerg Muller and Andy Priaulx are joinng the team for PLM is mega.

LOL John! You want to see some of the outfits he appears in at work!

Go Priaulx I just wish he was in Tommy's car, but nevermind. At least Tommy's car gives a new meaning to 'M3' - Muller, Muller and Milner

Does anyone have an idea how much this baby is worth?

Great great article as expected from this crew; I love the detailed specs you guys provide it really makes the extra difference for people like me. Also cannot WAIT to see these beasts ripping it up at Laguna for the finale! Hit me up if you guys need pictures.

Kiddin'... Awesome post!! What I really enjoy about Speedhunters is that besides the awesome auto-culture insight from around the world u guys also truely provide some great inside racing experience!

Loving the details and overall stories! Keep up the good work!

Maybe u guys should come up with some book or DVD editions of your features, you know, stories.... pictures, those awesome videos...

Thinkin' of either a big heavy book in A4 format or a tad larger for some sweet large sized pictures or a DVD or both!

Keep this up and in a few years ur work and data vault will be pure gold for any gearhead out there!!

Unrelated, but check this out:

Chris I had the same idea of doing a Speedhunters book a year ago and investigated the concept with a publisher... Perhaps it would be worth investigating again.

It'd get a spot on my coffee table for sure.

@ Rod : you've fired a kind of "riot" inside the V_éritble L_egendaireM_otorsport family club.....could you please contact me or the old gang very soon

So many carbon fiber everywhere

Wallpaper of the last picture would be appreciated ^^

A work of art, BMW engineering is always at the forefront of motor racing, never realized they ran AC units in these cars...love the carbon duct work moving air in and out the car..............Amazing!!!....i wanna be a race car driver lol

I'd like to second the wallpaper request on the very last shot as well.

This is exactly the type of article the brought me to this site! I love you in depth you guys are able to get on these insane cars! Thank you for making this kinda thing happen!!

another for wallpaper, especially that last image!

isaac - the red 'pedal' is a foot rest

Love the details, and close-up shots. Every features on SP should be like that.

Thank you very much for an excellent article. I hope BMW month never ends!

This car is a functional piece of art in my eyes. Just flat out amazing! Great pictures and details.

Can I marry a car? That has to be legal somewhere... right?

We need HighRes versions of these beautiful pictures.

I bet the pics were shot with cams with at least 6MP or more.

cheers guys brill write up and pics, its nice to see some tech pics of a cuttent race car to! now must get back to the monza gp on the telly.

I often log into BMW's media site just to look at their photo album. Stunning selection of photography

I would give ANYTHING to to ride in one of these!!!

It looks like BMW M3 GTS in 'Need for Speed Most Wanted'...

that's is a so beautiful car

I need to know why this car was taken back from me I have one and a quarter million invested in this car yet it was removed from my game. I will not purchase it again although I needed to finish certain parts of the game because I don't want to lose it again after all the time I put into it.

How did the Chinese Weibo connected with the RR3？