For my 86 Day contribution, I originally had this idea to do a post with 86 different photos of AE86's. Although that would probably set a record for the longest Speedhunters post ever, it turns out that it would be a quite a time consuming process.

Instead, I settled on 20 different AE86 photos I've shot at both drift and grip events in Japan. There's an interesting mix of cars here, and all of them represent the 86's never-ending popularity in its homeland.

Let's get on with the photos!

This contemporary styled rotary-powered Levin was running at the D1GP season closer last year. How about those giant 16" wheels?

A fully-built Levin coupe lurking in the shadows of Tsukuba Circuit following a hard day of racing.

Also at Tsukuba, a zenki Trueno screaming around the first hairpin like only a 4AGE-powered vehicle can.

Hardcore 86ers should know all about the stickers seen here.

Gold Levin heading home after a long day of drifting on the Tsukuba 2000 course. I'd like to see more cars with single color mesh wheels like this.

A female-driven Levin coupe at Nikko.

A rare Black Limited Trueno running gymkhana back in 2006. This was actually shot during my first ever trip to Japan.

This 2dr Levin looks just like the cars you see drifting in early '90s Option videos.

Obata-san in the Winds Auto D1 car at Fuji Speedway.

I think any 86 fan owes it to themselves to visit a one-make race in Japan someday. Watching 20 or 30 of these cars scream down the track together should be enough to convert anyone to the 86 cult.

The YMS Levin at Nikko Circuit earlier this summer.

Just another high quality privateer-owned AE86. You'll find cars like this in every corner of Japan.

Because there can never be too many photos of Nojima-san's RWB Levin.

The Techno Pro Spirit AE86 battling. the Yellow Factory EG6 Civic. Both are naturally aspirated 1.6 liter compacts, but the similarities end there.

AE86 track cars don't get much better than the Mizukami Auto Levin from Saitama-ken.

Levin coupe running on the Tsukuba 1000 course in early '08. This guy was out there holding it down against a bunch of Honda Civics and Integras.

If I ever get another AE86, I'm gonna have to paint it tan or creme white. Something about this color goes so well with the body lines. 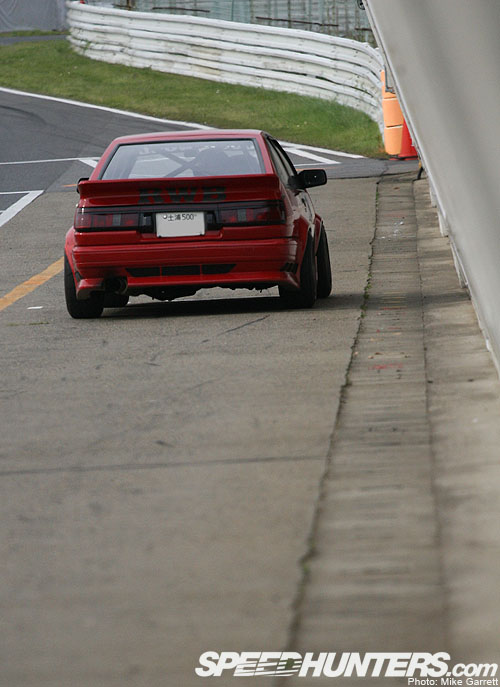 Finally, another shot of Nojima's car when it was still red.

cool upload man, they are such wicked cars, i would love to own one, the blue coupe in the shade is really sweet, im liking the coupe model more and more everytime i see one. the matte black RWB Hachi is killer too.

the RwB AE86 is favorite of all time

I love the cambered front, straight up rear end of the 86. RWB is my favorite, love the gold tire lettering. Sick!

and so this is awd month ? all these hachis ?

am i the only one that thinks that the green hachi would look even better without all those stickers.? btw, those wheels and that rear diffuser make the grren hachi look almost.....MODERN!!! and that gold hachi looks amazing

The picture of the Techno Pro Spirit 86 battling the Yellow Factory EG6 totally reminds me of the Fourth Stage ep where Takumi battles the pro circuit racer, haha I am a nerd.

3rd pic down, the blue N2 flared Levin looks good without/with it's GT wing. Chassis looks like it's a couple inches off the ground