The Z32 is one of those cars that has never basked in the same limelight as the Skyline GT-R and Toyota Supra. It’s a pity, as it is a great ride and like Kitabayashi-san of Pentroof likes to show us with this bright orange example, one with tons of potential. This is by far the most powerful and impressive Z32 I have ever shot and had the pleasure of riding in, one that really made me respect the good old 300ZX, a car that is now 20 years old!

The idea with this project was to create a very powerful Z, capable of running with the fastest cars on the wangan.

Like the Revolfe Supra we saw yesterday the problem with creating powerful rear wheel drive wangan racers is dealing with rear end stability and grip. To get over this problem Kitabayashi-san fitted a massive adjustable carbon GT-wing…

…along with the carbon rear diffuser, which stabilizes the Z at speed helping it stick to the ground easier. The rear Pentroof bumper is cut out in order to channel additional air smoothly away from the car.

Up front the Z32 sports a Pentroof bumper with tons of air intakes cut into it, after all the big VG30DETT motor requires a lot of cooling sitting in that tight engine bay!

Lightweight CE28Ns were chosen, finished off in a special-order metallic silver. They measure 9Jx18″ at the front and 10Jx18″ at the rear. For the best possible grip Kitabayashi-san went with a set of Yokohama Advan A048 semi-slick tires, 245/45/18 up front and 255/40/18 out back. The braking was upgraded with F50 front calipers and Lotus ones at the rear, both made by Brembo.

Sticker says it all!

Handling is kept in check by a set of special HKS dampers built to Pentroof’s spec and set up by Kitabayashi-san. Ride height is kept nice and low, giving a planted look to the Z32 from every angle you look at it.

The custom Pentroof titanium exhaust system starts off with ø 60 mm piping, moving on to ø 70 mm and ending up with twin ø 90 mm tips which protrude pretty aggressively from the bumper.

I don’t know what was more surprising when I first lifted the paper-light carbon hood, the amount of tuning bits in there or just how packed it all looks!

To strengthen the VG bottom end Kitabayashi-san balanced the stock crank and mated it to Tomei connecting rods and forged ø 89 mm Tomei pistons. The heads were ported and polished and fitted with upgraded valve springs and 260º camshafts, all top of the line products made by Tomei. HKS GT2530 turbochargers take care of supplying the boost, carried to the intake plenums via custom piping. 668 PS are developed at 6,200 rpm but it’s the killer mid-range that makes this car so darn fast out on the street, with a max of 77.8 kgm being developed at 4,680 rpm. Tire-shredding stuff!

You can see the twin Trust intercoolers through the central opening of the bumper. There was no way the stock transmission would be able to take almost 80 kgm of torque so an OS Giken 5-speed close ratio gear-set was fitted along with an OS Giken twin plate clutch. A Tomei LSD was chosen to complete the driveline upgrades.

One of the things I like most about this Z32 is the interior. Everything has been kept very simple, like the non-intrusive roll-cage to stiffen up the shell.  The HKS bucket seats replace the stock comfort-oriented ones…

Kitabayashi-san took me out for a pretty crazy run on the wangan going full out through every gear until we hit the top of fifth. The acceleration comes at you with an unrelenting urge and felt more savage once we hit third gear when wheel-spin was no longer an issue. The head-snapping torque was as impressive as the powerful Brembo brakes which shaved off speed instantly when leaned on hard. I would really like to see more Z32s like this out on the streets of Japan, the potential is definitely there!

Stolen, Recovered & Rebuilt Better Than Ever 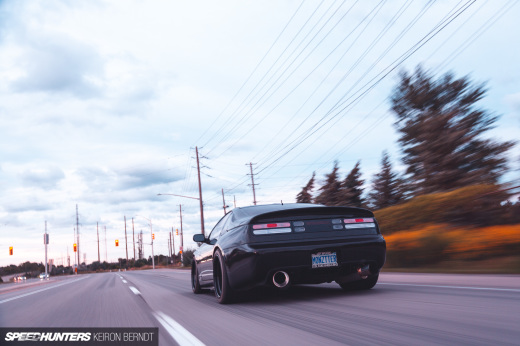 Bucking The Fiberglass Trend With A Steel Wide-Body 300ZX

hate the color thou

Nice shots Dino!. For many speedhunters that are unaware, Pentroof is one of the original Midnight Club members.

good to see tuners havent forgotten about the Z !

me too, i will never look down at this car ever again!

Finally some quality Z32 love! I feel like these cars dont get the respect they deserve. Anyone know what kind of exhaust that is?

could we possibly get last pic desktop??

Now this was the article I was waiting for this speed month! 77.8 Kg of torque at 4680 rpm?! WTF?! That's mighty crazy! Wow. One of the best features so far in Speedhunters. The Z32 is now my official dream car. If I had the cash, I would slap in a VQ32 with Top Secret ITB's.

A048??? sick car.... DIno your killling it with all these Wangan racers... i simply adore wangan, but wheres Top Secret?

Walfisch..no typo, don't ask me why, that's the sized he went for.

Wallpaper of the last please!

This is why Japanese cars are my fav. Hundreds of HP without the need of loud engines. Love the styling too. This car is 20 years old but it can run with the cars of today no problem. I'd actually take this over a 370Z. Also love the actual functional wings on these wangan cars. Too often you see big wings on cars that sit in garages and trailers here in the states. I hope we can see more stories like this Dino!

Awesomeness! Why does it say 300ZX on the back of it? I thought they were called Fair Lady's overseas.

Awesomeness! Why does it say 300ZX on the back of it? I thought they were called Fair Lady's overseas.

I can't believe this got featured. i remember when I had my Z and finding info on this Pentoof car was near impossible. God bless Pentroof

Excellent article, about time that someone recognized how good this cars can get when you do the right modifications.

been a while since i've seen a pro tuned Z; great article!

The twin turbo Z's were epic! The second pic would be a fandamntastic wallpaper.

Great article! Love those cars...Perfect combination of looks and performance.

Those Z's are my all time favorite jap cars.

Nathanael, it says 300ZX for the same reason you see Z's here in the states with Fairlady badges or Lexus SC with Soarer badges. Everybody wants the foreign stuff, including the Japanese.

Great post. Pentroof is so high end in the Z32 community, along with Escort Racing. This Z is amazing. So was the yellow one they did. Tsuchiiya and Orido actually drive it and gives their impressions on it. Such an awesome awesome car.

Dino, where i can find a highrez photos? can you upload it?

Awesome Z32, this was owned in the UK until recently. All Z32's say 300zx on the back, even JDM versions.

Great write-up and a beautifully crafted machine! I swear it reads "POTENZA" on the rear tires in pic 086... RE-01R judging by the tread? Again, absolutely fantastic!!

Like Walfisch said, 255 in the rear....for a 668ps car to run the wangan at continuous high speed? and +1 on truthsolo's observation

Dino, you think you can hook me up with some contacts in Japan. I'm in Korea and it seems silly to buy from the states when Japan is soo close.

Back when i had my Z, this was the car i wanted to build it after. Thanks for the post Dino.

Yes I agree with Freddy! Last pic as a wallpaper! I love this car, I want one myself now.

The sickest Z32 on this planet! The pentroof/abflug bodykit is the most impressive and aggressive kit available for this car. I have parts of this kit on my Z32 too.

Thank you for this feature.

For this category we've selected some of the most interesting demo cars of the year from around the world. These are essentially cars built to represent a company, or show cars with appeared at SEMA, Nagoya Exciting Car Showdown, the Essen Motorshow

For how great the R35 GT-R is out of the box and when fettled with, you can't ignore the continuous