Time now to head back to Daikoku to take a look at yet more rotary maddness from the "7-7" annual meeting. As night-time well and truly set in even more 7s began to arrive as people managed to jump in their cars after work and make the drive over to Japan's most famous parking area. For me the "best of meeting" award definitely has to go to the red Tamon Design FD in the opening picture. This is a kit that has been around for a while but in this latest version is sporting a new headlight design which looks sensational.

I appreciated the clean look of this SA, for me any car running Watanabes gets the thumbs up!

Here is another Tamon Design car, this time an FC sporting a very aggressive full body conversion. There is a lot of carbon detailing on the front bumper and hood, not forgetting those GT-like side vents after the front fenders.

Take a look at the rear end of the Tamon FD. The Y34 Cedric/Gloria tail lights give a totally new look to the RX-7s rear, and how about that center exit exhaust that pops out from the carbon diffuser! We will be seeing another car sporting an almost identical rear end in the final part of the "7-7" coverage, so don't miss that.

The variety of body kits available for the FD is simply mind-blowing!

…I certainly didn't refuse and followed him back to his ride which turned out to be quite the looker. This 1978 model has been kept very simple inside and out…

…while it's NA 12A twin-rotor sounded great through the custom exhaust…if a little smelly!

There were a few RX-8s at Daikoku too, this particular BN Sports sponsored one was sporting a 13B swap. There was a serious amount of Alpine audio equipment fitted in the interior, as well as those curiously positioned speakers up front in the engine bay!?!

The owner of this convertible FC went FRP crazy, a very rare car to see even in Japan. I'm liking the 80's hood venting!

This Garage Kagotani tuned FD sat very well on its SSR wheels and the engine bay looked just as sorted, with a single turbo conversion and a V-mounted intercooler and radiator set-up.

I spotted this Electric Vehicle charging point in a far corner of Daikoku, something I have never before seen even in central Tokyo. I started to fiddle around to see how much it would cost to charge up a battery, but couldn't figure it out. In fact I'm pretty sure it's free! In a few decades we will all be looking for these little boxes, how depressing!

Right next to the EV charging point was a tiny Lotus 7 meeting, poor guys were forced to find a quiet corner away from the hustle and bustle of the rotor heads! I felt sorry for them, it was "7-7" for them too!

I think white is one of the best colors for the FD, and loved how this car sat against the brick wall behind it.

…painted in the same livery as the legendary 4-rotor Group C 787B! Check out the number plate.

Around 10pm I noticed that some more cars had arrived back at the top of the parking area where I had left my car. It was the RE Amemiya crew that had showed up with a pretty impressive number of demo cars including the Genki 7 above.

This is the car Amemiya-san rolled in with, the company's latest demo car sporting the full Super GReddy 3 conversion. The engine is side ported and developing over 400 PS. You can see the wheel covers fitted to the blue Genki 7 too, I still can't believe they drilled the Enkei's out to fit them! Sacrilege!

Though this was a very curious color selection to go for…

…but it certainly looked the part on this fully "Amemiyaed" (new word for the day!) FD. From this angle and on this specific car the 997 headlights didn't look so bad!

The man himself, Mr. Amemiya. As always he comes over personally for these meetings and this time was being followed around by the Option Video cameras and a very small monkey-looking guy…

…who had dropped by Daikoku in this Subaru 360 station wagon known as the "Custom." I am of course talking about Nomuken, who was in presenter-mode for the night.

Here he is looking very pensive. The guy next to him is fellow D1 driver, Suenaga-san. 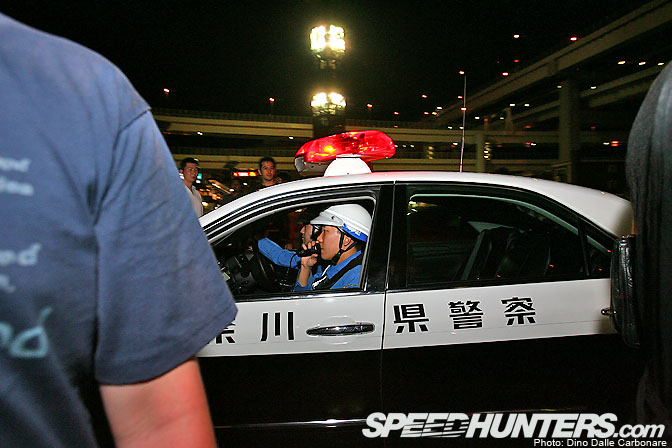 As ever the Police, who strangely enough have their HQ right in Daikoku PA (!?), cut the meeting short. They began driving around with their patrol cars blaring out via the PA system that everyone should leave. 20 minutes later most people had taken off, but as I was about to leave Ken Amemiya stopped by my car and told me that everyone was heading to Umihotaru PA, the massive parking area half way across the famous Aqua Line tunnel, bang in the middle of the Tokyo bay. Not having had enough of buzzing rotaries I decided to head over and see what was going on…

Stay tuned for more from the relocated "7-7" meet!

that white FD with the brick wall behind it, is stunningly beautiful, nice write up

the first fd's kit kind of reminds me a little bit of the ford gt's front end, great pics, thanks Dino

a wallpaper would be nice

u sure that "rx8" was an rx8 because i had a drift tengoku video and saw pics of a bn sport rx-7 rocking the front end conversion......just curious

Agree with Razvan, would look forward to more coverage or links to some, but would much rather come from the best SPEEDHUNTERS, booyaah!

I don't know why but i love the look of the Genki 7 there's just something about it.

OMG... I thought that i have seen enought fd's... But no matter how much i look, it is still not enough O.O FD is just too damn awsome <3 Love it.

I love this site.

I wish I could have gone to this meet but I was stuck at work in LA.

Thanks for the coverage!!!!

Dino, nice shots and coverage as usual! What a big day for SEVEN!

Oh my.., the police ruined the big day..

I can imagine how epic it was, the sound of all rotating rotors at the same time at the carpark..*drool*

Love the first picture or the Tamon Design FD. That car is gorgeous. Anyway we can get a wallpaper of that?

The other Tamon car you'll be showing is the Scoot quad-rotor, am I guessing right? Great coverage btw!

these japanese car meet posts are probably the best thing speedhunters has to offer. amazing write-ups and photos dino!

Awesome pics. As a rotary FD3S owner, I love the Japanese tuning scene. Find Craftcompany and FEED for the next pics.

Awesome coverage! I look forward to seeing pics of this meet every year. Can't wait till part 3!

Dino, I followed the tamon car on the highway from tsukuba. Pretty nice, We took some pics of it on the highway. look out for those.

I have a few features of various cars up on my blog too.. there will be more.

I am in love with the tamon car.. time to start saving for a FD and the kit

hate to be an asshole, but the only SA in there was the yellow, the other first-gens were FBs

Would you (or anyone else) be able to help me... I'm looking to travel to Japan in the near future & would love to check out some events like this. Is there somewhere I can go to get the lowdown on when and where similar events (meets, trackdays etc) are happening?

Thanks in advance, Blake.

In the 3rd shot of the Tamon Design blue FC...any pics of the slammed white FC with white sideskirts, white rear spoiler, and crazy fitment wheels on stretched tires?

i'm with noggin, my guess for the other Y34-tailed car is the Scoot RX-7