Bright and early Sunday morning i arrived back at JDM Wembley for the main event and if the previous days qualifying session was anything to go by this was going to be the event of the season so far.

A few of the cars had sprouted new decals and appendages in preparation for the days competition, after a fantastic qualifying performance  Brad (lightning) Mcqueen's new bumper sticker was still intact…for how long it would remain that way was was yet to be seen..

..as was Peter Barbers "soft drink can gaffer tape" approach, with the level of talent competing everybody knew rubbing wall was going to be a necessity if they were to score maximum points. 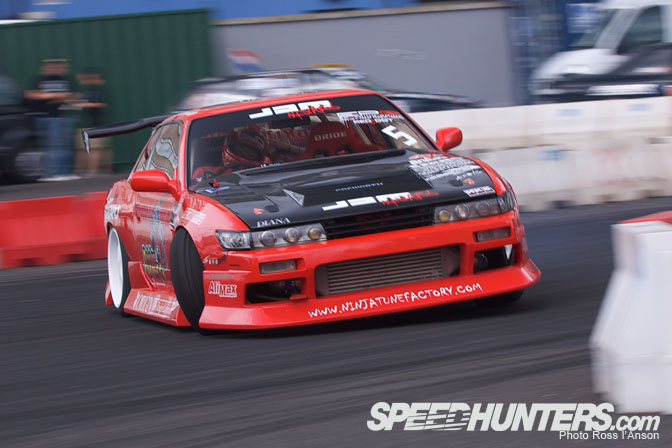 Its very rare i get the chance to do some tracking shots at events but when Al (Touge Heros) clarke offered me the passenger seat in the MX5 camera car for the open practice session i was there like a shot..

Shooting backwards from a moving vehicle is not a technique i have mastered but i feel  the 30 minutes i logged in the MX5 was time well spent and the lessons learned will see me well when the opportunity comes up again,

still looking back through the viewfinder at the chasing cars was without doubt the best seat in the house and i owe a huge thanks to Al Clarke for making these shots possible.

With morning practice over and the drivers being divided into two camps seeded and newly qualified it was decided to sort out the running order with a "super lap",  no warm up no practice  cold tires and one lap to impress the judges Martin Ffrench was first out, and after a good solid first part of his lap spun in the final turn, the super lap was going to prove a good leveler.

The judges has stated in the driver briefing that they would be looking closely at the the line through the walled turn two and Lennard Wanders in the Falken S14A  delivered! with a stunning display of car control he was the first of the day to leave paint on the advertising banners.

Sid Crowfoot in the big 4 door Chaser was next to leave his mark, a perfect line saw him gently kissing the wall and removing the JDM Allstars banner.

Nigel Colfer is no stranger to a little bumper/wall interaction and didn't disappoint on his super lap, a superb run saw him remove the clipping point marker with his rear wing.

Running order sorted and straight into the top 32 battles, Phil Morrison was one of the first to progress with a win against Olaf Commijs..

Team Japspeeds Shane Lynch matched Peter Barber blow for blow, too close to call the battle went OMT until  a small mistake from Lynch saw Peter Barber through to the top 16.

Brad Mcqueen scraped  the sticker off his bumper and Mark Luney lost 2nd gear during their first battles, too close to call it went OMT with Luney having to shift from 1st to 3rd at the start he eventually took a close win against Brad.

After a warm up run that rivaled  some of the battles Dean kerney progressed to the top 16 against Driving sports K-san.

Having to contend with a mysterious miss fire in practice followed by a broken steering arm team Twisted's Mat Chiappa made it thought to the top 16 after drift prodigy Dwayne Mckeever suffered a mechanical failure during their top 32 battle.

In to the top 16 and a change of position for me and a early bath for Lars Verbraeken as he was knocked out of the running by Christy Carpenter in the Top Fuel Imports rb26 powered S15.

After a little contact between Dan Chapman and Anthony scott in the final turn Dan took the win and progressed to the next round.

A calm and collected run from Phil Morrison gave him the win against Nigel Colfer.

In the team Falken battle Remmo Niezen in his usual devastating form goes through to the finals.

Next up Christy Carpenter and Dan Chapman both airborne over Lynch's leap with Dan taking the win.

Taking a 6-4 advantage in his first run against Paul Vlasblom Phil Morrison looked like he had it all under control, following Vlasblom closely matching every move even i thought he had it in the bag…until coming into the final turn a little hot Morrison spun giving the round to Vlasblom.

Now starting to look unstoppable Dan Chapman first outing in the freshly rebuilt PS13 was going according to plan with a win against Peter barber to secure a place in the grand final.

Battle of the M power, Remmo in the V8 M5 engined E30 and Vlasblom in the M3 powered E36 touring was always going to be quite a event, the super close battle resulted in Vlasblom going through to the final with Dan Chapman.

Into the final battle of the day Paul Vlasblom and Dan Chapman, predictably the battle went OMT and even then i had no idea who won, but the judges had made their decisions and made everybody wait until the top 4 drivers had positioned themselves  in front of the massive crowd…

..after a short wait Dan Chapman was announced as the well deserved winner, on form from the off in what is essentially a new car after a heavy crash a few months earlier Dan hardly put a foot wrong all weekend and puts him in strong position for the JDM Allstars final at the historic Silverstone circuit in a few months time.

JDM Allstars Wembley has without doubt put Drifting on the map in the Capital, and after seeing possibly one of the greatest events in the UK im sure that next year JDM Allstars will return, how they can top this truly epic event is yet to be seen but im sure they will.

The Ultimate JDM Porsche 964’s Life In The UK

This is not chaser its toyota cresta

Ross do you work for JDMAllstars too?

You beat me to it.

That Remmo e30 is landing that jump like a wrc champion! looks like its a running wolf! amazing shots!

How can Lennard Wanders in his Falken S14 see through all of the stickers on his windshield? Did anyone think of Taladega Nights when Ricky Bobby sold his windshield to Fig Newtons?

How can Lennard Wanders in his Falken S14 see through all of the stickers on his windshield? Did anyone think of Taladega Nights when Ricky Bobby sold his windshield to Fig Newtons?

A wallpaper of the BMW E30 and wagon image would be awesome. Just sayin'.

chaser/cresta/cressida are basically the same thing

Like i said before awesome shots Ross, was great working with you!

i see autostyle on Olaf Commijs's car! fucking hell! don't ever buy anything from autostyle, their shit sucks !

I was stood right behind the fence at the barrier clipping point on both days and simply put this was one of the best events ive been to! the drivers gave it 110% round the course from practice through to the final. Ill definately be at the next one!

i got a chance to see the FALKEN E30 and S14 when i was at a car show about a month ago at RECARO @ Nurburgring.

Sickness in every shot. oh by the way! where can I get some of those speedhunter stickerkers!?! Looks dope!