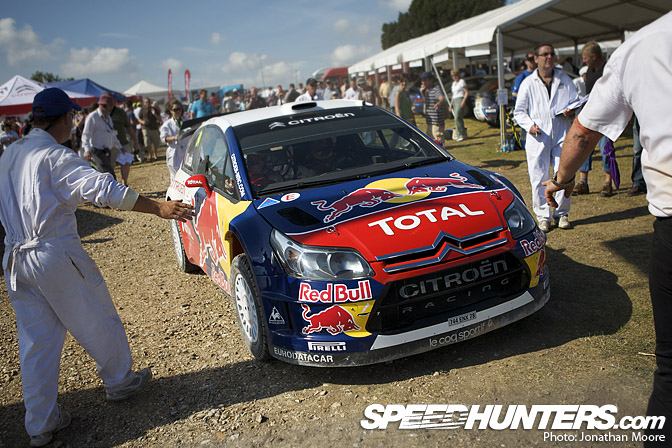 Goodwood can be overwhelming as an event. Over 152,000 fans flocked to West Sussex over the three days, and sometimes it was difficult to move for the crush of people in the lower paddocks and along the hillclimb. But even though there was a constant stream of people trekking up the hill to get to the Forest Rally Stage, once you were there it was a much calmer experience – at least in the crowd sense, if no less intense for car activity. Sebastian Loeb is pictured here in his 2009 Citroen C4 WRC waiting to roll into the start area. 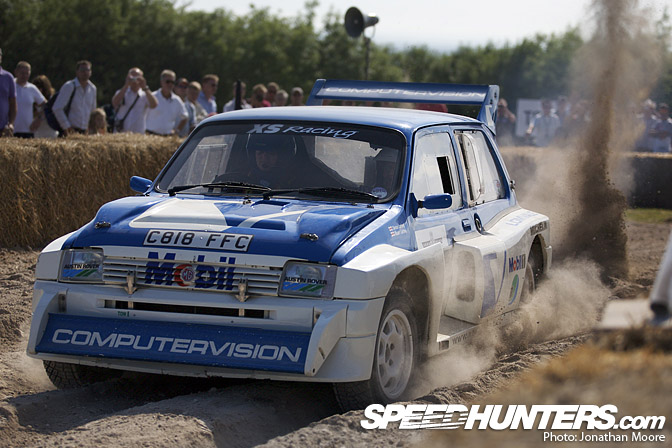 The Forest Rally Stage itself might have been the focus for watching the cars in anger, but the emotion and buzz of the service area and paddock was incredible. You didn't need passes to get close to the action: anyone who put the effort into making their way up here was rewarded with a fantastic experience. Viewing opportunities boiled down to three things: the start-line queue, the start itself and the tented paddock area where cars were on static display. Here's the 1986 MG Metro 6R4 sending up rooster tails as it launches off the line with its 3.0-litre V6. 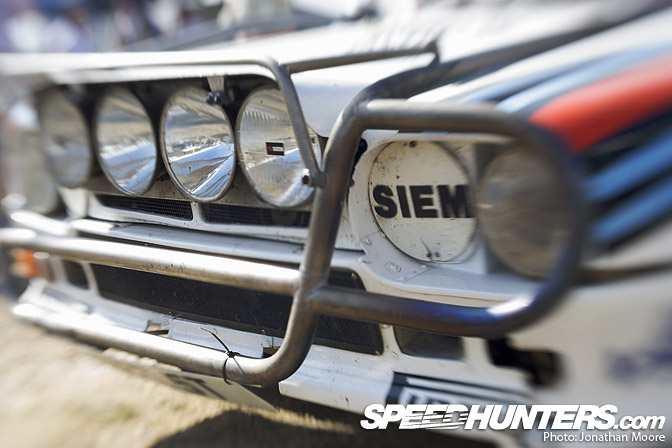 The paddock was obviously the place to have a thorough poke round the cars, but there was also a throng of people around the cars queuing up to take their runs. Here you could feel the excitement building as co-drivers signed off start documents, crew hovered round cars checking everything was as it should be and the engines burbled on idle. As soon as a car has its engine running it feels so much more alive and has that much more poise. 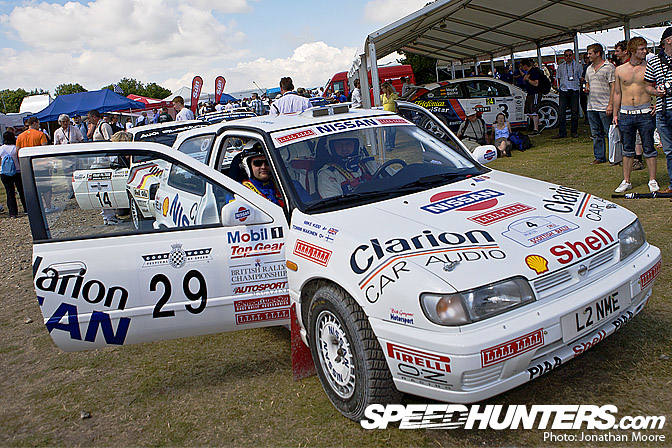 There were always around half a dozen cars waiting in a line to drive up to the start area, comprising a mouth-watering mix of machinery. Quattro behind 911 behind Impreza behind Citroen WRC… Decades often separating the cars (and drivers!) but all with the same purpose. Whistles would blow, the crowd would part and there would be another rally monster coming towards you. This is British rally champ Mark Higgins waiting in the 1994 2.0-litre turbo Nissan Sunny GTi. 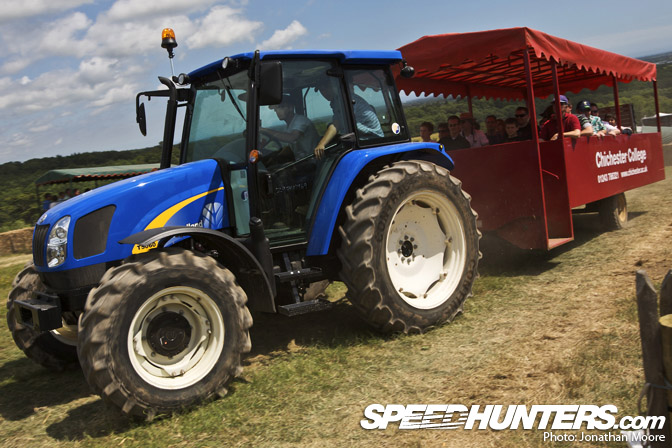 But first you had to get up the hill. It could take a fair while to get up to the rally area, so three quartets of tractors and trailers operated a cab rank system to get the fans up the last, steepest stretch. The trail passed right next to the rally stage in the woods, giving you a great introduction to what awaited you at the top. Am I the first to get a picture of a tractor on Speedhunters? Should I be pleased?! Probably not, but it's worth it to see Rod's reaction… Look at those wheels! The bodykit! Feel the power! 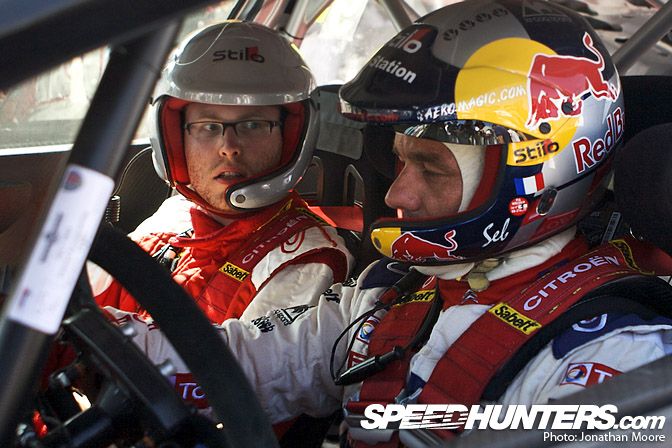 The manufacturer teams had their own service area alongside the start-line queue: cars would finish their run, dive back back under the awnings and the mechanics would descend on the cars – just as though they were on a 'real' rally round. But despite the seriousness, you could see that teams and drivers were thoroughly enjoying the event. Or perhaps it was the other way round? Seriousness despite the fun? As mentioned in the Rally Stage story, Loeb blitzed the previous fastest time on their 'practice' run, and then proceeded to go quicker and quicker throughout the weekend. Citroen team-mate Dani Sordo took over driving duties on Sunday. 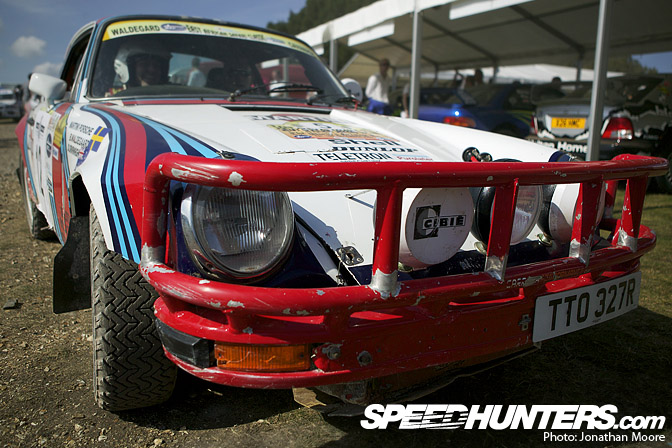 And there was plenty of evidence of just how much effort drivers were putting in. This is one of the great things about rallying – and historic rallying in particular. There is no way you can take your car out on a stage and expect it to come back in pristine condition. Not for these guys keeping cars in protective, air conditioned environments: these are fighting machines, expecting to be battered and bruised. Here's 1978 Bjorn Waldegard's beautiful Martini-livered 911 SC in Safari rally spec with dents and scrapes aplenty 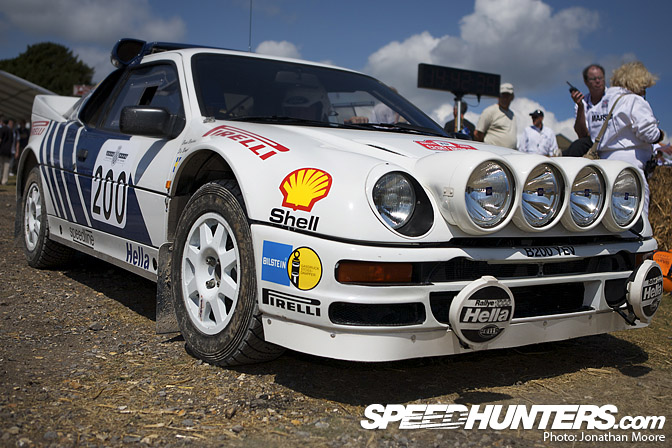 The original Stig? (Apologies to anyone who doesn't watch Top Gear in the UK!). Blomqvist's 1986 Ford RS200 Group B car is first in the queue to take the next run. 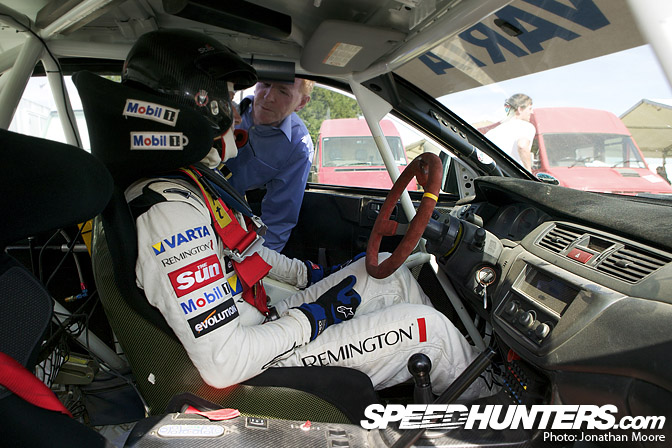 Among the contemporary drivers at Goodwood was 2008 British Rally Champion Guy Wilks in his Mitsubishi Evo IX. He was very much joining in the Meeke/Loeb battle for fastest run. 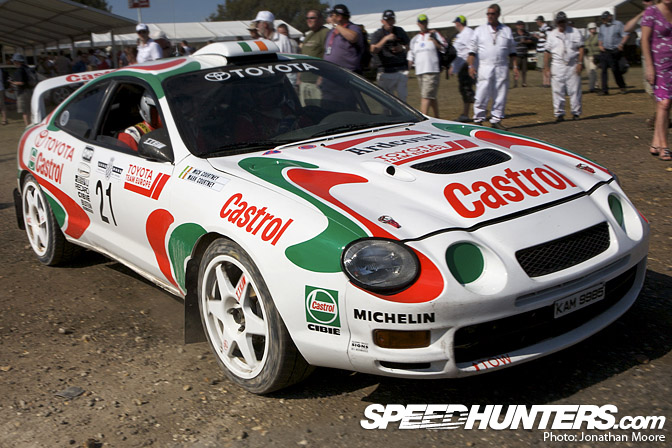 The Group A GT-Four ST205 Celica from 1995 is still competing in current rallies thanks to Mark Courtney, its driver at Goodwood. The Celica heralded the beginning of almost a decade of domination by Japanese rally cars. 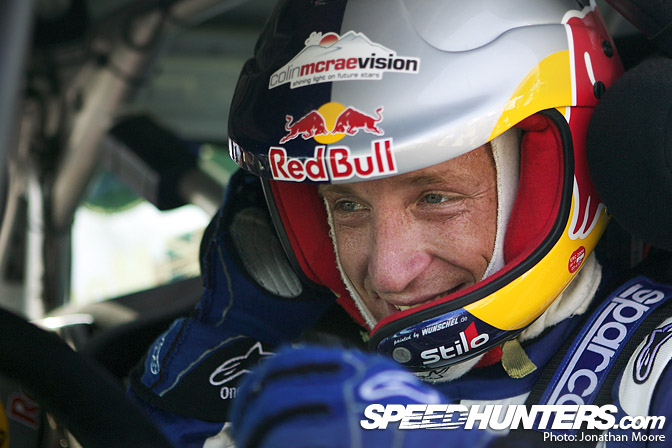 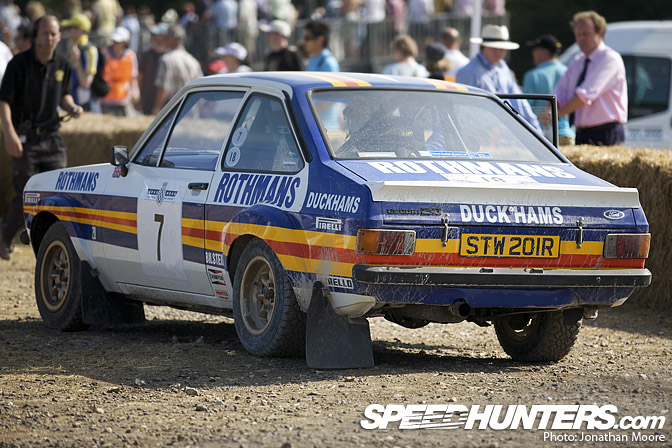 There were three classic Ford Escorts on show: two Mk2 RS1800s in Rothmans colours and a Mk1 RS1600. Watch out for a retrospective on Ford's rally achievements coming soon on Speedhunters! 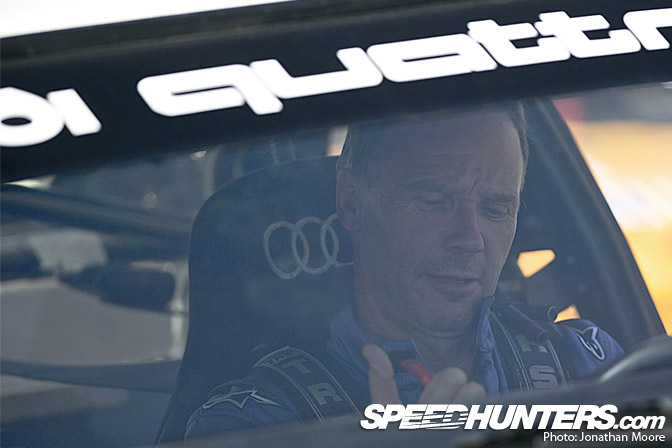 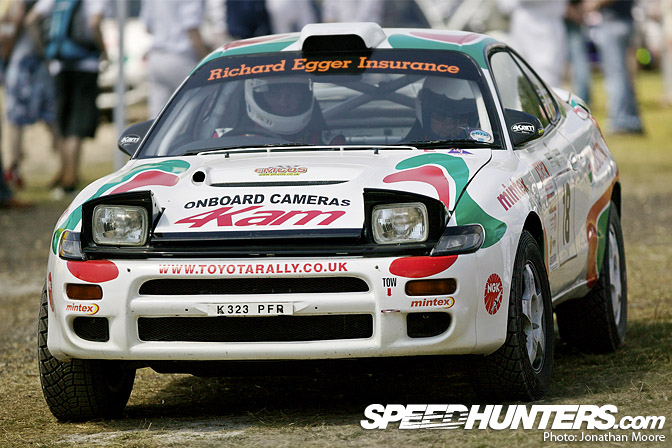 As one car takes the start the next one up waits patiently: a last moment to study the course notes and discuss lines. This is the 1992 Celica driven originally by… Carlos Sainz of course! 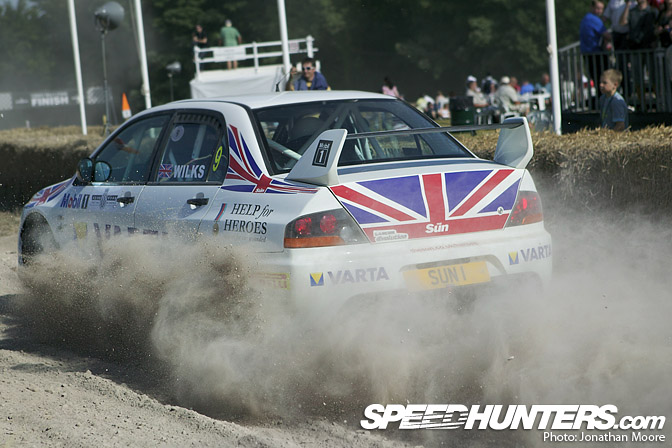 Although the official pace notes listed the start and finish as being grass, whatever there had been was long gone even by the start of the event on Friday. Instead, a deep powder of gravel and stones meant cars where buried to their hubs even before launching off the line. Of course, that made spectating even more spectacular. And painful in some cases. This is Wilk's Evo on take-off. 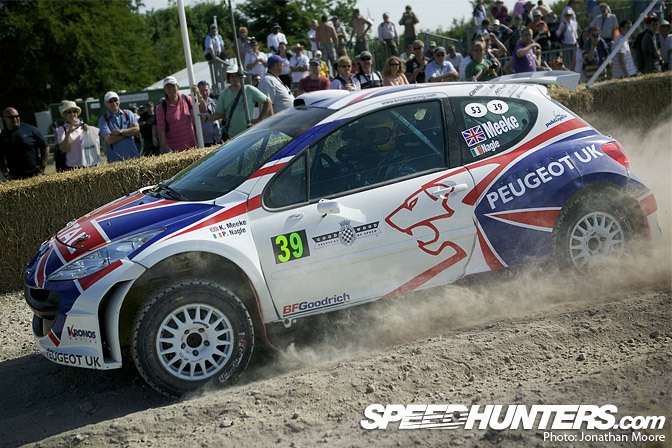 Here's the start of the amazing run where Sebastian Loeb 'navigated' for Kris Meeke: Jedi Master and Padawan? 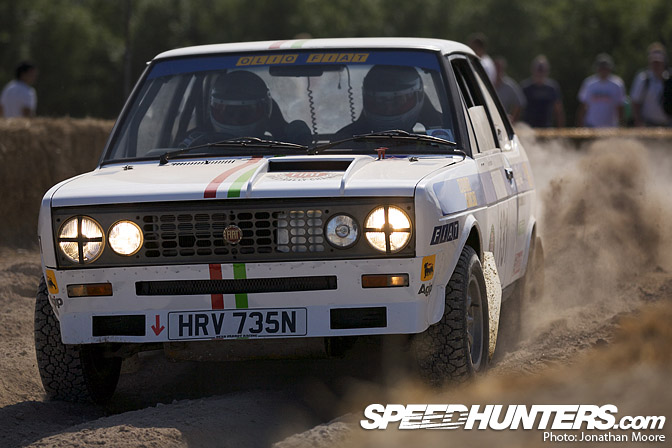 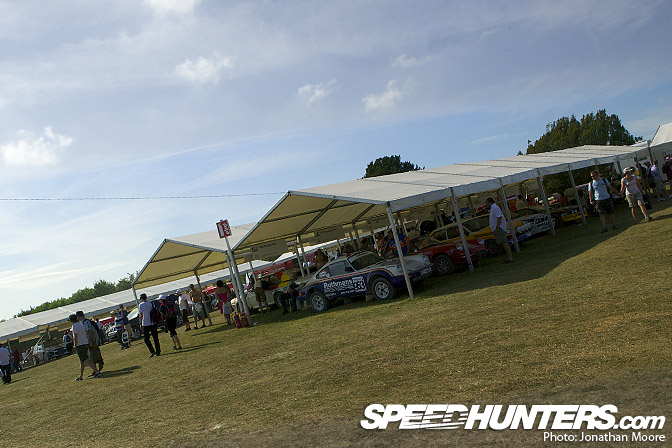 In the tented paddock was relative calm. Every car had a sign above it showing the model and year, race and start number; spaces showed where the cars were out for a run. 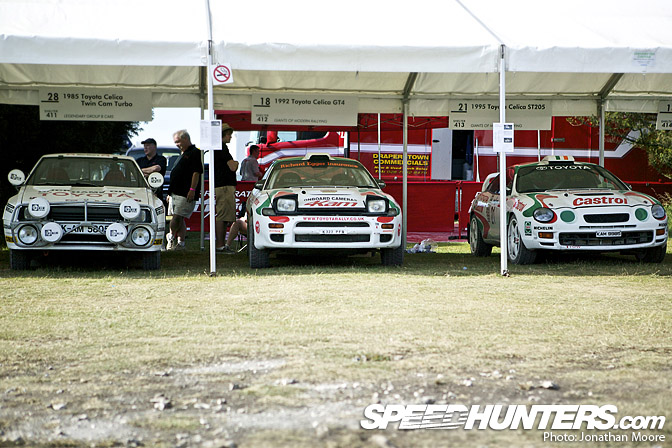 The Toyota Celica family evolution was clear to see in this line-up, from the boxy 80s shape to the rounded, '90s cars. 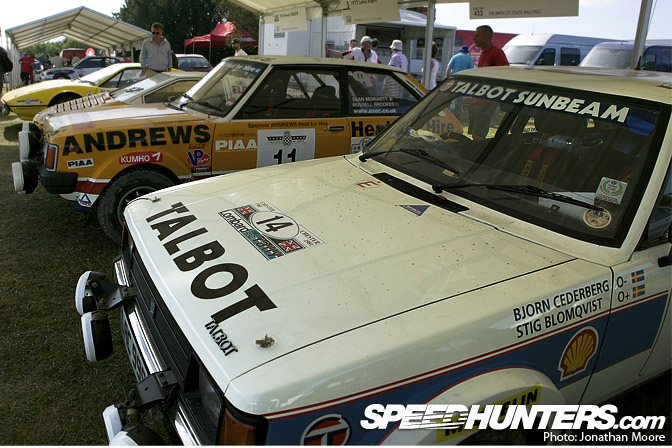 Rallying was all about two-wheel drive, back-out screamers until Audi blitzed the field with its Quattro technology in 1982. It's strange to think that the Talbot Sunbeam Lotus won the previous year – what a massive leap in technology there was! 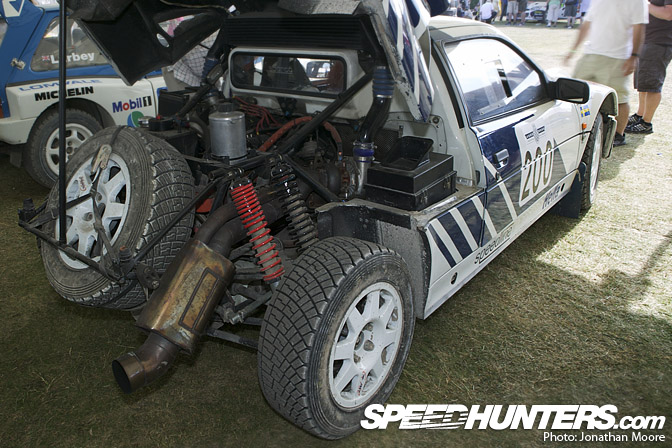 For some reason I was surprised to see the spare wheel in the back of the parked RS200, but this is from the days before mousse or run-flat tyres. The Ford was parked up after incurring some front-end damage. Check out the size of the exhaust! 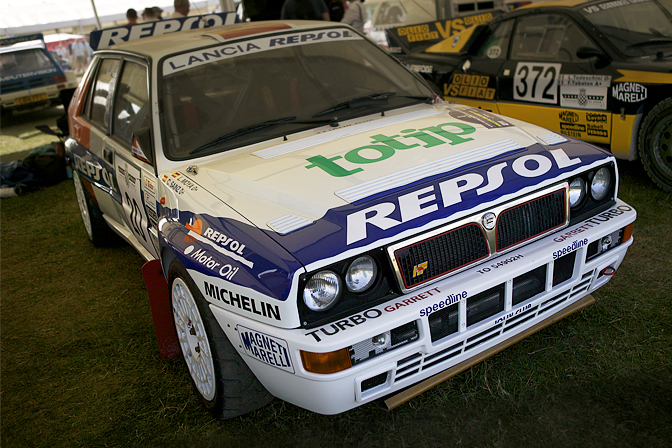 Even if the man himself wasn't here, Carlos Sainz was there in spirit thanks to the number of his cars that were present. This 1993 Lancia Delta HF Integrale is part of the amazing period where Integrale drivers won the championship for six years in a row, from 1988 to 1992. In the first year, Integrales won 10 of the 11 rounds! Sainz took two World crowns in the car: '90 and '92. 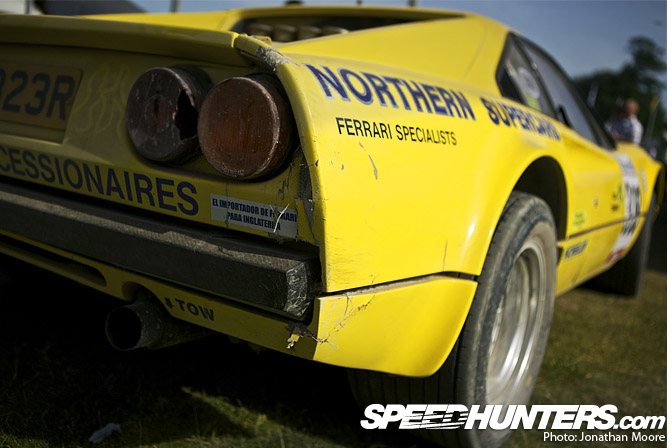 To be honest it really was painful to see the 308 on the stage: I winced as it came towards me with the underside scraping along the chalk ruts in the road. But was it driven any slower because of that? Of course not. 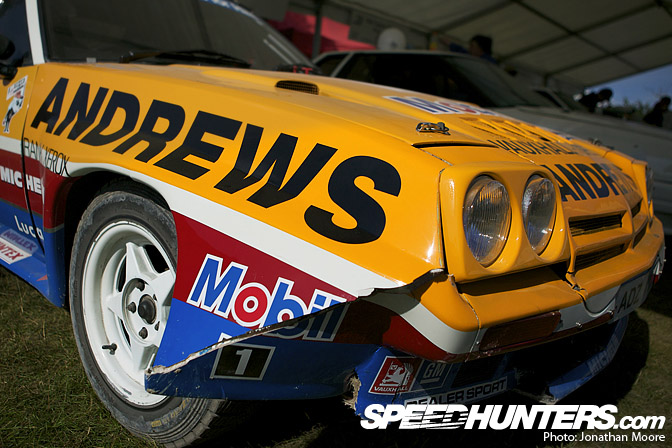 Another run, another bit of damage. Veteran Russell Brookes pushed his classic 1985 Opel Manta 400 to the max, alternating driving this and his previous car, the Talbot Sunbeam Lotus. 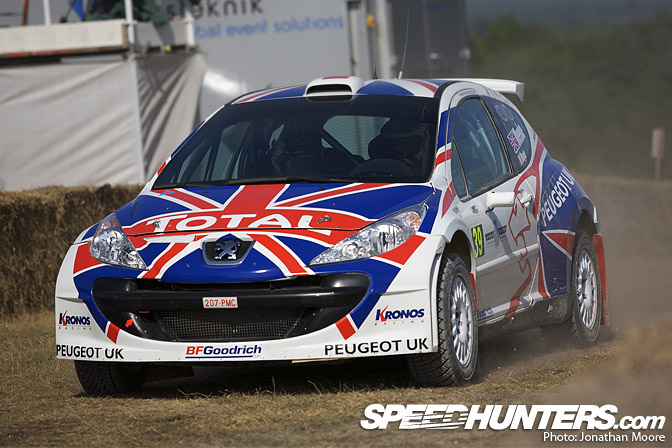 Loeb and Meeke arriving at the finish. Strangely, official times aren't distributed for the Forest Rally Stage, unlike the hillclimb, but the fastest time Loeb posted was reported to be around 2m18s. 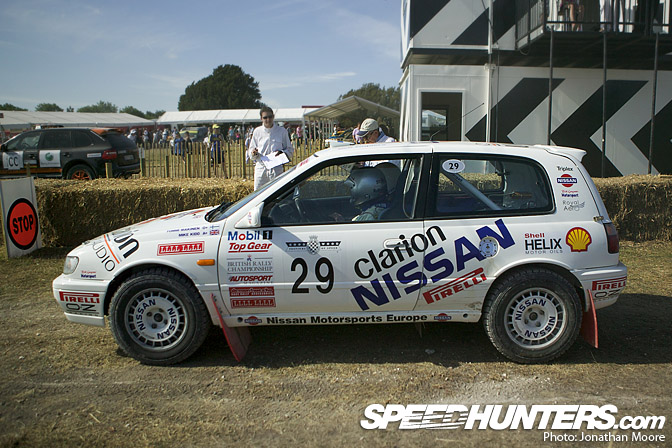 Superstars, sun, gravel. A perfect way to see rallying up-close and personal. But there are plenty of rally events around the world, and even the humblest car can look great driven flat out down country lanes. Get out and see them!

That's not Daniel Elena in the pic with Seb.

Mean pic with all the Toyota rally cars

Great pics love the bit about the stig anyone that doesn't know about top gear isn't a real car guy or girl its a shame top gear usa didn't make it into production. But super cars exposed is close enough !!

GTi turbo? Did it get an engine conversion?

The GTI-R was the turbo 4WD version (with cheese grater on the bonnet for the interwarmer, bigger rear wing, different front bumper etc), whereas the FWD GTi was NA and looked much more wings and spoilers wise. Still a good, fun cheap car to rally though.

awesome article......loving all this rally coverage! Would also love to see a ferrari flying down a stage with wreckless abandon....sweet!

i dont know but i dont thnk that was daniel elena

nonetheless great coverage on this event

Hmmm - you may well be right about Elena so I've edited that. For the Nissan the spec came straight from Goodwood's entry list! Sometimes they do change the cars between the programme being printed and the actual event.

That guy in the quattro is not Hannu Mikkola...

Check out the peeking velocity stacks on the ferrari. Awesoe coerage as usual. lots of old skool eye candies. ^_^

great photos and I really liked this comment "these are fighting machines, expecting to be battered and bruised". I liked that whole paragraph. Do you have any photos of the McRae 4x2 buggy to share with us?

If you know your cars the MG METRO 6R4 is a clubman car . The other METRO that was there was a full works car not touched since Tony Pond last drove it

that is Hannu Mikkola he just older now...and he seems to be in better shape and have a snazy hair cut then his recent pics

rimjob are you talking about this group b car in this video??

i mean diane not rimjob

Sunny GTi its N/A! This is not AWD GTiR, but FWD GTi. More info about car, please.. its rare.

Toyota never left they got kicked out for cheating if I remember right they had a restrictor plate on their cars but they took them off and got caught so they got banned.

alldaybored: it's more complicated than that. They devised a system whereby the air could actually go around the restrictor. Many said it was one of the most clever things they'd seen in terms of cheating. You're 100% right about them getting the boot, though.

Although Toyota did come back with the Corolla WRC, so essentially, they did leave of their own accord. Still, they have seemed to have a bit of a culture of rule-ignoring dodginess - there are some bits of paper in the wrong hands that seem to have been lost within the Italian justice system. Max Mosley saw to it that McLaren were soundly spanked (heh) for what appeared to be lesser transgressions than Toyota in F1.