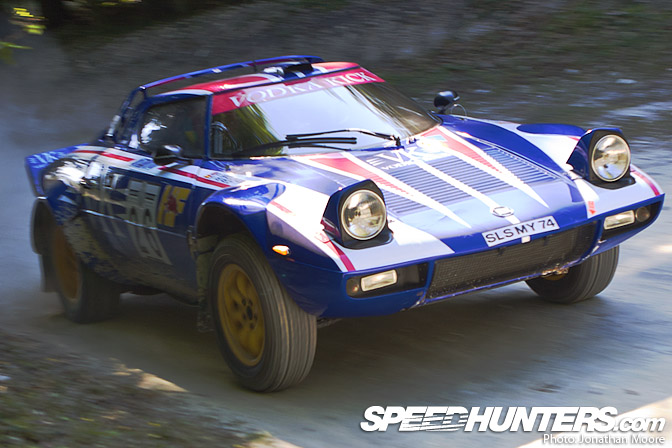 Cars that radically shake up the status quo are rare, whether in racing, rallying, drifting or on the street. Often it's down to performance or the implementation of new technology under the body, but upon its launch in 1971 almost every aspect  of the Lancia Stratos was shocking. Remember, the car that won the previous year's World Rally Championship was the Renault Alpine A110 with its '60s curves. The Stratos didn't just represent a new decade but a whole new style of race car attitude – dedicated to win on the track, to capture the imagination of customers and make their wallets follow. The livery of this 1974 example (chassis 1590, the 90th car built) may have changed to reflect current owner (and drinks magnate) Steve Perez's sponsor, but the soul of the car hasn't changed and Goodwood's rally stage was the perfect chance to get up close. 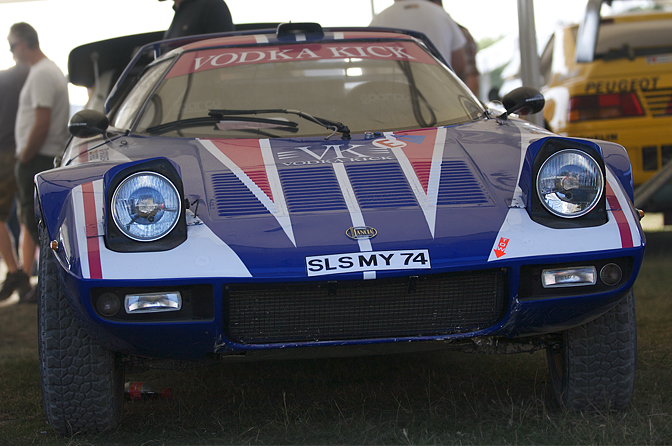 The Stratos Zero prototype shown at the Turin motor show in 1970 was even more breath-taking – an extreme wedge shape, the product of extensive (perhaps excessive) wind tunnel testing. There were no doors: you got into the car by a pivoting front windscreen, stepping down into a reclining driving position over a retracted steering wheel. Pull the wheel towards you and hydraulics closed the front screen. Check out the YouTube link at the bottom of this story. Bonkers. 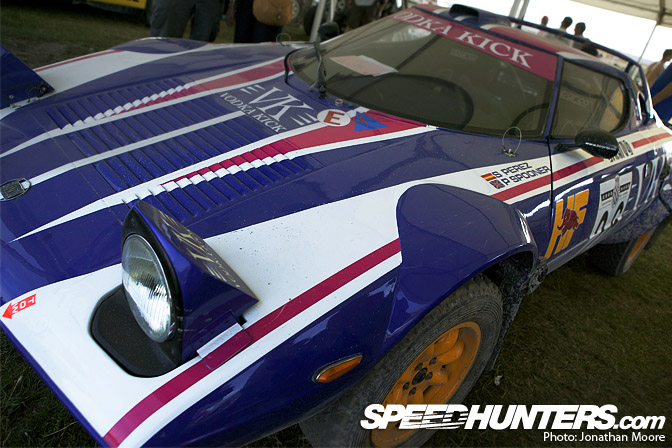 Not surprisingly the prototype never went beyond the show car. But Lancia rally team manager Cesare Fiorio, who had been running Lancia Fulvias with some success knew that the time had come for a new car to take on the Renault, Porsche, Datsun and Saab contenders – all cars developed for rallying from road car bases. FIA rules dictated a minimum run of 500 cars for homologation: what was to stop them making a limited run homologation special, aimed at crushing the opposition? The board were convinced and work began. 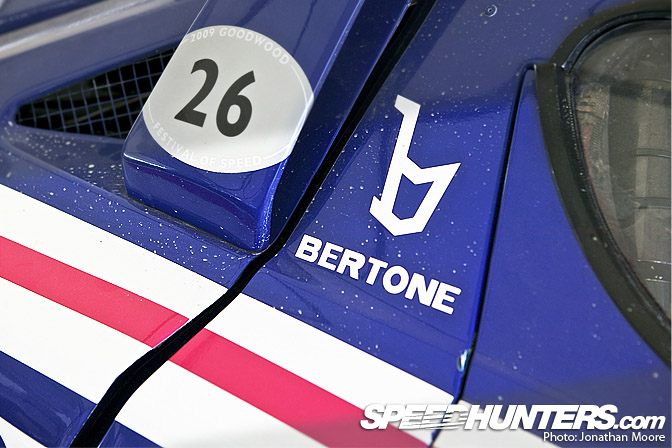 Within a year the new car was ready, the rear-wheel drive, mid-engined Stratos HF (High Fidelity). It retained the aggressive wedge-shape, but now sported a huge, wraparound front screen – and even doors! Pop-up headlights provided illumination and kept the profile clean. But no rear window. After all, who needs a rear view in a rally car? Power came from a 2.4 litre V6 engine lifted from the Ferrari Dino, thanks to both Ferrari and Lancia belonging to the FIAT group, following their acquisition in 1969. Styling kings Bertone provided the stunning bodywork – Gianpaolo Dallara, now head of the famous race car manufacturer, headed the design team. A year of testing and refinement followed, with the first rallies entered at the end of 1972 in an invitational class and then a full season in 1973 complemented by ramping up car production to complete the necessary numbers for homologation. 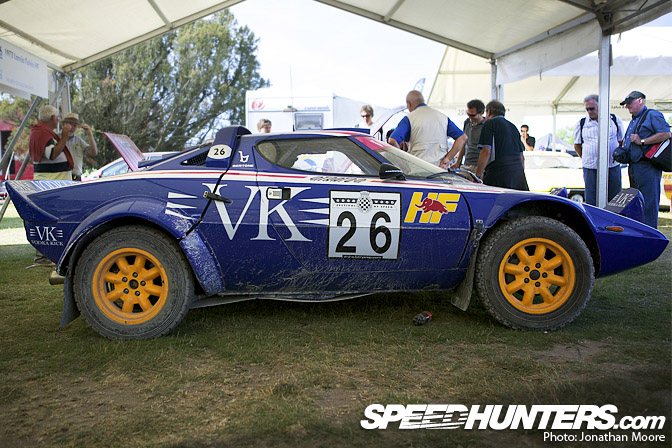 1974 was the Year Of The Stratos. Initially the FIAT 124 Rallye gained the upper hand, but then the Stratos in its iconic Alitalia livery soon got into its stride. Three victories towards the end of the season was enough to wrestle the world title from the sister team, and laid the foundations for a further two years of domination, using an admittedly slightly crazy scoring system: only a manufacturer's highest-placed car scored points, but points were based on final positions including non-scoring cars, so the higher your cars finished the more points other manufacturers couldn't score! 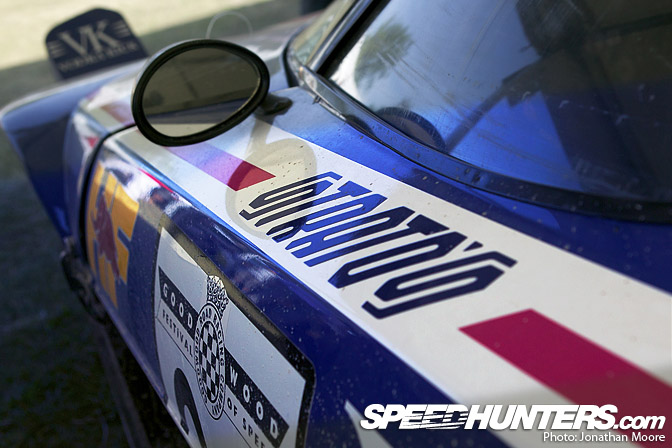 Factory drivers Sandro Munari and Bjorn Waldegaard took the Lancia team to further victories in 1975 and 1976, when cars also became available to privateers. In 1976 the Stratos swept the podium at both the Monte Carlo and Sanremo rallies. When you compare the car to its contemporaries it's obvious how ground-breaking the concept was – just look at a Peugeot 504? Saab 96? The Stratos was far ahead of typical 1970s design concepts, and helped push Lancia from producing boxy street cars to the more swooping Gamma and Beta Autostrada cruisers. 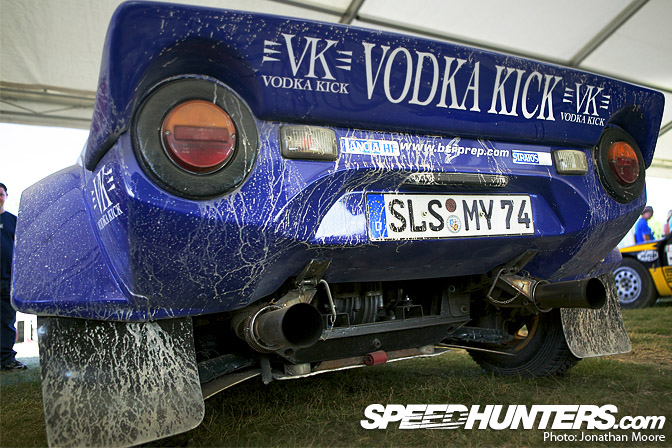 FIAT group politics put an end to the Lancia factory effort as the company needed to promote the FIAT 131 road car brand to the public, but the Stratos rallied on until 1979 in private hands, winning the Monte Carlo for the fourth time in succession in the hands of Bernard Darniche. A pair of turbocharged, 560hp bewinged cars were developed for Group 5 sportscar racing, but were overwhelmed by the hordes of Porsche 935s even before their unreliability kicked in. Or they caught fire, which one of the pair did. 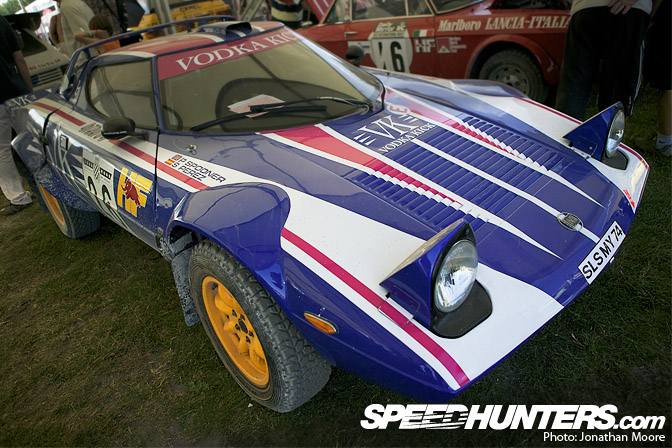 The Stratos laid the groundwork for the Group B monsters of the '80s: the bespoke behemoths built solely for the rally stage. Less than 500 Stratos were built (homologation rules were handily reduced to 400 as the Stratos was in production), but like the Group B cars its impact outweighs the numbers. You were unlikely to drive one on the street (unless you were either lucky, rich or mad), but these turn-key rally cars completely changed the face of rallying. It was a pleasure to see one in the flesh.

Stratos in action (turn the sound off, to save yourself from terrible music)

One of my most favorite cars ever!

Nice cars,ahead of their time but talk about a squash to get into 1, Markku Alen needed the roof section raised slightly on his 1 to accommodate his height!

I've always loved the Stratos! never thought of one in Blue, but it suits it!

Love love LOVE the Stratos. This one's nice, but the Stratos in Alitalia livery is beastly.

beautiful car. Had a chance to ride shotty in one going down the highway, amazingly soft ride for a little sports car. My dad wanted to go but he couldn't fit in the car, unless he wanted severe neck problems haha.

One of the most iconic rally cars ever! I love Stratos! Bertone is one of my favorite design houses, you can always count on them to design a car with a wedge shape.