Anniversaries are tricky things, looking back tends to fade the negative and accentuate the positive. Nostalgia for a safe past rather than the uncertain present or unknown future. But the years do rattle past quickly so some form of marker post is necessary if only to give focus to the things to come. Back in 1984 I never imagined that I would be still be following the circus some 25 years later. Although in my twenties I still had no clue as to what the future would bring, I was between careers at that point, existing as a temp accountant. One client that kept me busy was heading for floatation on the stock market and the guy who ran the finance department, Peter Barry, was a car nut and photographer like me.

So let's head for Le Mans……..it seemed like a great idea, I had gone as Page & Moy Billy in '78 to '80 but now I was assisting up and coming F1 lensman, Keith Sutton, so getting a media pass became a possibility…………indeed a reality. There was another guy, one Mr Slattery, who also fancied the trip so that is how we three came to leave Surrey one Thursday evening in Peter's "special" Escort bound for La Sarthe. The car was a bit "special" with various go faster bits and a unique rear wing……………a recent visit to a nature park had ended up with some form of monkey taking a few mouthfulls out of said wing…………Peter maintained it improved the handling on high speed corners…………Slatterey and myself were not wholly convinced.

Through the night we drove, arriving early Friday, to locate the campsite and pitch our tent. Camping Houx as I remember a lively, crowded place but with good access to the paddock and pits, only a short walk across some fields. Camping and Le Mans have vastly improved their facilities and comfort levels since 1984, the conditions that prevailed then might have been familiar to the protagonists at Borodino.

Then, as now, Friday was a day when the action takes place off the track, press conferences from the manufacturers and the ACO, and these days a drivers' parade. Back then our main job was meeting up with the others hardy souls who had made the trip, arriving in dribs and drabs and sampling the various forms of hospitality that my new media pass entitled me to.

One that greatly attracted the three of us was that of "Rattlesnake Chilli" and cold beer on offer at the Texan team of Davidson Racing. Their March Buick, though really fast down the Mulsanne Straight, 219mph, was frankly one of the also rans but the girls were tall and pretty, the chilli hot and plentiful and the beer was cold………………. 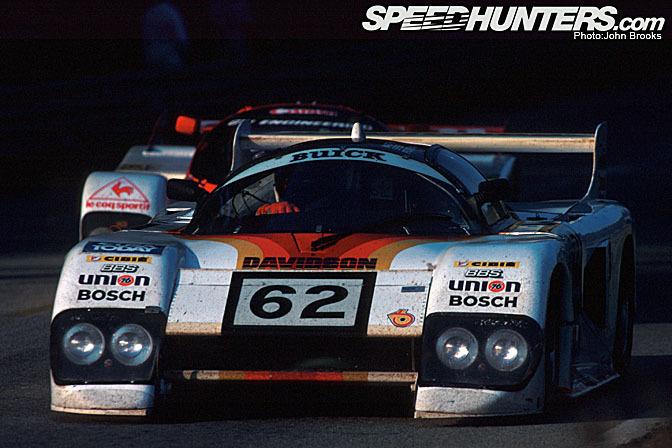 We made a nuisance of ourselves with the Texans for as long as the beer kept flowing, then retired to our campsite where we fired up the bbq…………..Peter fancied himself as some kind of Crocodile Dundee figure, all Aussies do, so throwing merguez and burgers on the barbie was no problem. Actually he was good at it. Of course all this food made us thirsty and the party spirit took over and the beer flowed like………..well it flowed. We had picked up a few strays along the way, including one American journalist who had driven over to the campsite, something he would regret later.

Regrets, a bit of an early morning word that, like hangover and headache……………we awoke to find a hot dusty day already underway, our camp still looked like Borodino but two days after the battle, the bbq was an early casualty, somehow burnt out, how the tent did not join it was one of life's mysteries. Our American friend had tried to leave during the hours of darkness but had driven up a tree………….no real damage done but Avis would have to get the paintspray out.

Meanwhile I headed back to the track, there was a race going on sometime soon, ah yes the race. (MEMO to self: never get mullered that night before a 24 hour race) advice I have stuck to ever since, well mostly. The traditional 4.00pm start time gives the locals plenty of time for an extended lunch, so someone thought it a good idea to provide the crowds thronging along the pit straight some entertainment, this is what they came up with, a trad- jazz band, a loon with an umbrella all riding a local farmer's disguised tractor and trailer………oh well the French never really got the idea of pop music. Johnny Hallyday??? I rest my case.

The race, ah yes the race. In 1984 the battle was between the factory teams of Porsche and Lancia…….or so we thought. Some late rule changes so incensed the Porsche management that they withdrew from the race. This left the privateers who had purchased the 956s and 962 (all 15 of them) to take the battle to the two factory Lancias.

Bob or "Brilliant Bob" was a sportscar legend. He had been an Olympic standard skier, a contemporary of Jean-Claude Killy in the 1968 French team,  then injury intervened ending his alpine career. He had taken up racing, becoming a top sportscar driver and would win most of the important races, except the one most dear to him, Le Mans. He was killed in a strange road accident in March 2001. He was a keen cyclist and would ride home to Strasbourg from Le Mans after the race to maintain his fitness levels. Out riding near the village of Lorida in preparation for the Sebring 12 Hours he was hit by an elderly driver and died of his injuries. There is a memorial to him by the side of the Highway 98 and when I stopped to pay my respects earlier this year there were fresh flowers at the marker stone…………….and I remember a story that each year the ACO officials that are attending Sebring leave a bottle of red to accompany the flowers……………French of course……………

The big news back in 1984 for sportscar fans of any shade was the return of Jaguar to the great race. OK it was not a factory effort but it did have the support of Jaguar North America. The Bob Tullius Group 44 project was built and run to factory standards, reflected by the numerous wins in SCCA, TransAm and IMSA. Lee Dykstra had designed a car that was a combination of Aluminium and Kevlar, powered by a 6 litre V12 engine and shod with Goodyear's finest.

For 1984 there were six (six!) classes of car eligible to race…………this was as a result of the ACO and the FIA trying to attract the cars form North America running under IMSA rules. The top class was either Group C1 or IMSA GTP depending on your origins. This accommodated the Lancias, Porsches and Jaguars, like the Kremer 956 of Tiff Needell, Rusty French and David Sutherland.

The other main class was Group C2 which ran to rules for less powerful cars, but still prototypes. Here at the start of the race is a Lola T610 alongside a Rondeau M382 lead a pack of C2 cars.

There were also three GT categories, imported from the IMSA scene. The class did not enjoy the popularity it does today so there were few entries, here is the Ferrari 512BB of the GTX class followed by a Porsche 928 running in Group B spec. Confused? Yes some of us lost the will to live trying to fathom the FIA/IMSA rules package…….somethings never change.

So the clocked ticked round and soon it was 3.00PM, the race starting an hour early due to elections on the Sunday. Bob Wollek led team mate Paolo Barilla's Lancia away in front of the packed grandstands.

The first surprise of the race was Roger Dorchy in the WM Peugeot who snatched the lead from his more conservative opponents. For the local hero it went to zero on lap 4 when he shunted the car at Mulsanne Corner on lap 4 breaking the radiator and front axle. Strike one!

Normal service was resumed with Joest Porsche and Lancia LC2 locked in combat for the lead.

One of the entries was the Canon Porsche 956 of Nick Mason and Richrad Lloyd, which was a camera car for the race, the on board cameras were huge back in the 80's compared with the microwave minatures of today.

Pit stop for the second Lancia LC2, incredible to see how cramped and out of date the pits were, a nightmare for the crews.

Just as the sun went down on Saturday evening there was a massive crash out on the Mulsanne when John Sheldon's Aston Martin Nimrod suffered a puncture pitching it into the barriers. The car ended up back in the middle of the track and was then hit by his sister car of Drake Olson. The impact sent debris everywhere killing one marshal and seriously injuring others, Sheldon suffered severe burns to his face and hands. There was a full course yellow period for over an hour taking the race into darkness.

Back then I was very keen so lugged a tripod around and went mad on time exposures, some of which even came out. 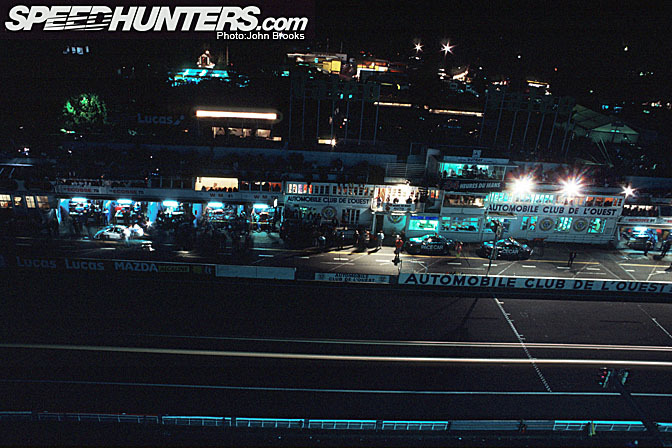 Looking at them now the whole place looks dark and cramped especially the pits. Looking across at the control building. I remember the first job of any team on either side of it was to try and seal the drain covers up with duct tape to stop the fumes escaping, as the pipes from what seemed to be the world's biggest pissoir ran just under the pitlane. Nice.

The other story of the race was gradual advance of the Joest Porsche of Henri Pescarolo and Klaus Ludwig. The car had pitted on lap 3 to have a fuel line tightened and other essentail work so was down in 30th position at the first hour. Hard driving and good pitwork plus the misfortunes of others had catapulted them up the order till around dawn they slipped into the lead which they would hold till the end.

The sun comes up over Terte Rouge and the beginning of the Mulsanne Straight.

Third was another 956, this one driven by Jan Lammers and Jonathan Palmer for GTI Engineering.

Suddenly the time crept up upon us and it was 3.00PM, time for tears, laughter and Champagne.

So my first Le Mans on this side of the fence……………did I want to come back? You bet!

I love that time exposure shot, look at their consistancy..man...

I saw many of the Group 44 cars at Road Atlanta's Mitty this year.

Fantastic as always John. It amazes me to see the crowd piling over the cars at the end there.

By the way, any chance for a desktop image of any of these vintage Le Mans shots?

I saw a bunch of cars I had never seen! I recognized three or four cars!

Fantastic, John! Thanks so much for the shot of Brilliant Bob. Ive been looking for a good one for a while.

Before I came to Japan, I was selling off a collection of Tamiya kits & managed to get four times what I had originally paid for one of the winning Joest car. Then found it again cheaper when I got here. Which is probably as close as I will ever get to an accountancy career...

Thanks for a brilliant story John, I enjoyed reading it immensely, you must have very fond memories of the race! Gawsh I miss the Martini livery, was always my favorite on a slot car Porsche I had as a kid, and the Lola T610 looks almost crab-like!

Excellent, been looking foward to this since you told me about it at Silverstone

Where might I find some online streaming coverage of this race?

Wow, those cars were just brutal and sexy at the same time, and so many different models...I wish Porsche would come back in LMP1...no disrespect but I find the Audi-Peugeot battle quite boring.

I will do more of this as the season progresses.