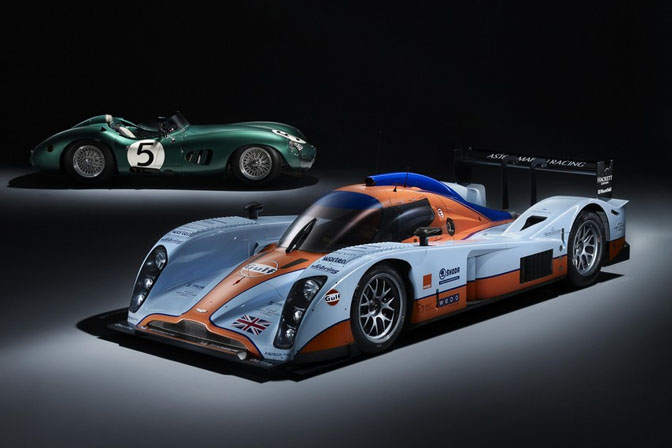 This cool shot comes from Aston Martin Racing, who are celebrating the 50th Anniversary of its first win at Le Mans, back in 1959.

Although Ferrari had dominated in this period, Aston won the event after the Moss/Fairman car acted as a 'hare' and raced hard early on. This forced Ferrari's into a quicker pace. A tactic that is used frequently at Le Mans.

The remaining Aston Martin DBR1 carried on at a more respectable pace and Roy Salvadori and Carroll Shelby won Le Mans, ahead of the Frere/Trintignant car.

Back to today and Aston Martin Racing return to Le Mans with three entries, using a Lola chassis with AMR/Prodrive modifications including bodywork. Power is from V12 Aston Martin unit.

Realistically, a win is unlikely due to extra performance of the Diesel Peugeot's and Audi's but one of the three Aston's could be the first petrol car home.

wher can i get a desktop??

Great pic, here's another vote for a desktop.

You guys STILL haven't got it have you? If it doesn't have the Speedhunters watermark, it's not an in-house photo and was taken from somewhere else, so if you want a desktop you're going to have to SEARCH for it. Geez... -_-'

Nice backstory there Andy! Had no idea all those racing heroes had driven for Aston Martin! Must've been a great race to watch back then.

Good luck to them! I'd love to at least see Aston on the podium, would be a great way to celebrate 50 years.

@Naga_Ten - It would be better to inform instead of berating folks for not realizing copyright laws but I digress.

The Gulf racing color scheme looks brilliant on the DBR1!

Calm down Naga_Ten It was an honest mistake, I forgot momentarily whilst posting that reply that the image was Astons own as was said in the article. Its the first time I've done this and Josh_f1 makes a good point.