We couldn’t possibly have a VW Group month without featuring one of the most important cars of all time, the Audi Ur-Quattro. 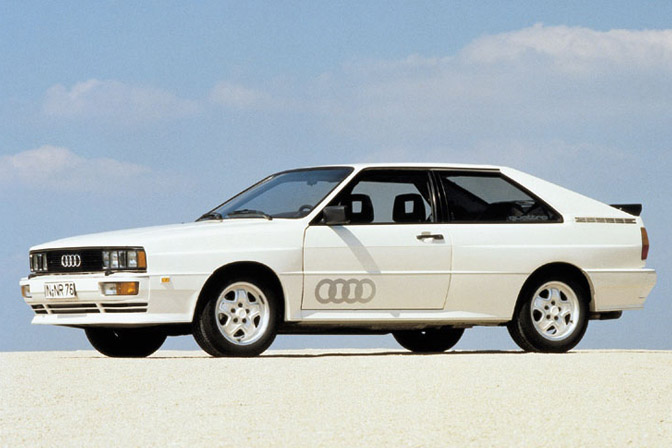 The Ur-Quattro made its debut at the Geneva show in 1980, on sale to the European public a year later. Based on the cheaper Audi 80 coupe, visually, the Quattro had more aggressive styling with dramatic flared arches, deeper front bumper/spoiler and a taller rear deck spoiler.

The ‘Original’ Quattro was the first car to feature the ‘quattro’ four wheel drive system. ‘Ur’ is a German prefix for Original.  Quattro is ‘Four’ in Italian. To differentate the Ur-Quattro from the Quattro system and individual models, the coupe should  be refered to with a Capital ‘Q’.

Legend had it that VAG discovered the VW Iltis Jeep could beat any other vehicle in the snow. Audi started development on using the Iltis drivetrain in an Audi 80. At launch the road car was powered by a 2.1Litre in-line 5 cylinder 10 valve engine with turbo and intercooler (known as WR) . It produced just under 200bhp. The engine was uprated a little to 2.2Litres in 1987. 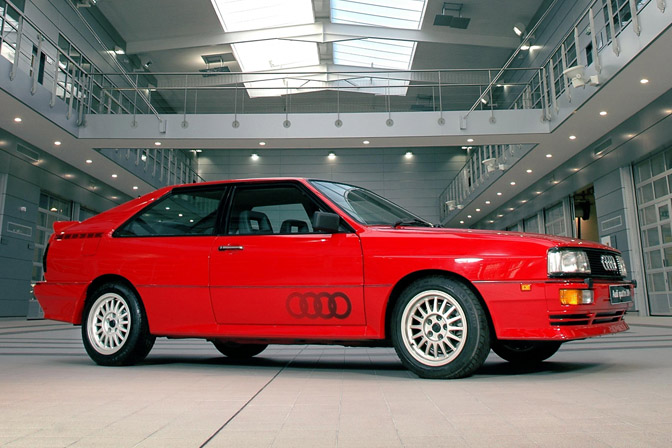 Updated again to 20v spec in 1989. During its lifetime the car remained much the same externally. Front styling was cleaned up with flush headlamps and more curvature on the front end. At the rear the lights recieved subtle updates but the 1991 model resembeled the original 1980 version. 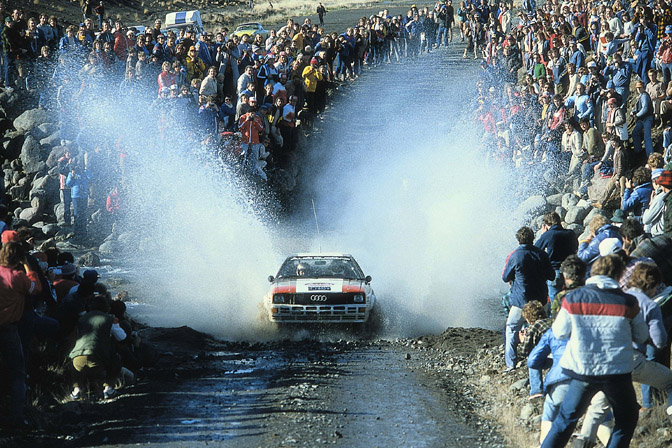 The roadcar may have been an awesome machine, but it was Audi’s success in Rallying which cemented its place in Automotive History. The first Audi Quattro was a close relations to the roadcar. The A1 and A2 Quattro were immediately successful winning Rallies almost immediately.

This car is one of the first Audi Quattro Group 4 rally cars from 1982, shown here being demonstrated at Goodwood by its original driver, Hannu Mikkola. Initially the cars ran in a White livery with Audi Sport three colour stripes….a response to BMW’s M-Power graphics perhaps.

Mikkola winning events in its first season back in 1981. Michele Mouton (above) would also win the San Remo Rally later in the season, the first woman to win a World Championship Rally.

The Quattro 'A1' Evolution was developed from the Group 4 car to meet the new Group B regulations, introduced in early 1983.

Visually, the car has wider fenders and air intakes ahead of the rear wheels..

Rallying was big back in the 1980's and the British Rally Championship was one of the toughest national series. Audi Sport UK ran a team with WRC drivers when committments allowed.

Yellow was added to the colour scheme in 1984 when HB Cigarettes became sponsor. The 3 colour Audi stripes were toned down. This shows the Quattro 'A2' in action on Rally New Zealand.

The A2 was the last evolution of the standard bodyshell.

The Audi Sport Quattro was a short wheelbase model developed for Group B rallying in 1984 at the time when Audi were coming under pressure from Lancia and Peugeot.

In addition to the smaller footprint, the bodywork was Carbon and Kevlar, reducing the weight significantly. Front and rear track was widened and the windscreen was more vertical.

To meet Homologation, over 200 roadcars were built. These are very rare today and the ultimate Quattro to own.

The Sport Quattro made its debut in 1984. Stig Blomqvist won the drivers’ championship the same year.

1985 saw the debut of the Sport Quattro S1 rally car. The drivers were not fans of the original rally Sport Quattro, so a new more extreme version was devloped quickly.

Accidents were now common place in Group B rallying. The Speed and cost was getting out of control. Governing body FISA scrapped Group B . Audi continued for a short while with a HB sponsored Audi 200 quattro, but they were looking Stateside for their next project.

With a number of Sport Quattro chassis gathering dust, Audi decided to enter the Pikes-Peaks hill climb in Colorado, USA.  Walter Rohrl won in his first attempt in 1987 with Michele Mouton and Rohl giving Audi a hat-trick the following years.

The success in the USA gave the German manufacture massive exposure, so Audi decided to enter the American TransAm series in 1988 which Rod featured earlier this week.

This lead to the IMSA GTO Audi 90, the first period of DTM completion, Super Touring, a return to DTM and the amazing success in Sportscar, all covered on Speedhunters.

Add to this the technical and commercial success of the ‘quattro’ system and  the number of cars with four wheel drive on the street today and you can see why the Ur-Quattro was one of the most important cars of the 20th Century.

As the UK advertisments once said 'Vorsprung durk technic….as they say in Germany'

I'm a huge fan of the 85' Sport Quattro S1, it was so ridiculous of a car, i loved group B racing . That thing sounds amazing.

They are all so nutty I love it; shame there is nothing like it anymore. IMO Audi's black/red/grey stripe combo is way more aggressive than the M-power stripes, they should put it on the R15, R8 GT3, and A4 DTM!

P.S. That first picture is simply amazing and action packed!

I never had any interest in cars until I saw the audi quattro and group b rally...this car opend my eyes to a new world

"ur" means in this term something like "genesis" or "first", or "priamary", but not orginal. not that it does matter .... (there anyway only about 110million people that speak german as theire first language, so it is not that important)

I really love these car features

the s1 is the most insane sounding 4 wheeled contraption ever! total madness.

You wallpaper spammers will some day realize that Speedhunters only puts up WALLPAPERS of photos that are there own. It would be nice if these spammers would actually add something to the discussion once in awhile instead of filling every comment section with the same crap.

For the record I think it should be up to photographer to pick a wallpaper or two if he sees fit. But what do I know.

Anywhoo nice article Andy, as always. Learned a few new things. And the Ur Quattro is still one of my all time dream cars.

IMHO every pic has to be wallpapered..... i think i have to google it