Back in the days before the internet, and yes there was such a time, most folks would get their entertainment at home from a television set. There was even a time before satellite broadcasting, let alone cable, so in the UK there was choice of only four TV channels. For advertisers and their agencies this was the "Happy Time" as audiences were coralled into watching this limited menu. On two of the channels advertising was the main source of income, the other two were, and continue to be, funded by a poll tax. This concentration of potential customers drove the advertising agencies on, creating commercials that were often better than the dross of everyday TV. Brands became synonymous with the catch phrases in these 60 second masterpieces.

One of the most distinctive was that of Audi. A lugubrious actor, Geoffrey Palmer, would deliver the lines "Vorsprung Durch Technik" which for most of the linguistically challenged Brits represented the limit of their German vocabulary. It translates literally as advancement through technology and most would regard that as pretty fair description of how Audi go about their business. So how on earth in 1999 did such a rational company end up with two completely different projects trying to win the same race?

Hindsight is of course a wonderful thing, at the time the logic behind the twin approaches was clear. Audi had dominated the rally world with the revolutionary Quattro and had also a great line of success in Touring Cars in the BTCC and DTM but they had not got involved in endurance events. A decade later and it is hard to imagine Le Mans without Audi. The rules as now allowed for prototypes with and without a roof and the question was, which would provide the optimum solution? The left field answer that Audi Sport came up with was build both. The Audi R8R being the "Roadster".

The R8R was the creation of Wolfgang Deiter Appel. Ex Formula One teams tuned specialist suppliers Fondmetal assisted with the aerodynamics. The monocoque was designed by Dallara and built up by ATR. There was a standard double roll hoop arrangement and the R8R had twin turbo 3.6 litre V8 engine and a Ricardo sequential 6 speed transmission. The brakes were 6 pot Brembo and 18" tyres were supplied by Michelin on OZ wheels. Audi Sport engaged the legendary Reinhold Joest's team to run the project, which was a no-brainer with their track record of four outright Le Mans wins in the previous 15 years.

The R8C was designed by Tony Southgate, famous for his work on the TWR Jaguars, the Ferrari 333SP and back in the 70s Formula One BRMs. The car was built in the UK at RTN in Norfolk. Although a full Audi Sport project it was entered for Le Mans under the Audi Sport UK banner. The team director was Richard Lloyd who had brought success to Audi in the BTCC and previously had run the Canon Porsche 956 operation. The coupe shared the same engine and rear drivetrain as the R8R but the front suspension arrangement was completely different. The ACO regulations concerning open and closed prototypes meant that the R8C ran smaller air restrictors on the engine and had narrower tyres than the roadster.

The two R8Rs had tested at Paul Ricard early in the year and then had headed to Florida for the Sebring 12 Hours. As a result several modifications were made to the aerodynamics and also to the engine. There were two squads of drivers. Michele Alboreto, Dindo Capello and Laurent Aiello in the  number 7 car and Frank Biela, Emanuale Pirro and Didier Theys for 8. Theys had orginally been signed to drive a coupe but the late withdrawal of Yvan Muller meant that he changed teams. It would turn out to be a good move.

Audi Sport UK also had two crews on hand. The number 9 car had Stefan Johansson, Stephane Ortelli and Christian Abt, while number 10 had the all British line up of James Weaver, Andy Wallace and Perry McCarthy.

The Le Mans 24 Hours is always over subscribed for entries and back in 1999 a prequalifying day was held in early May. There were 53 cars chasing the 48 places on the grid. Racing at Sebring had shown Audi Sport that they were some way behind the BMWs and presumably the Toyota and Mercedes Benz efforts as well. The BMWs were build by Williams Grand Prix and with help from one Peter Stevens had got creative with the rule book and instead of a twin seat car like the Audi R8R had effectively constructed a single seater with a single roll hoop. This offered big advantages in terms of aerodynamics, speed and fuel efficiency. However the Joest team stuck to the task and both cars qualified comfortably.

It was a different story over at Audi Sport UK. The project was several months behind the open cars in getting approval and one of the cars arrived at the Qualification day having barely turned a wheel. The other was not much more developed and as is usually the case, when you are up against it things go wrong. Both cars had small problems which prevented the full potential being realised. The 9 car got through OK before lunch but the 10 looked as if it would miss the cut in the afternoon. The biggest problem was that the door kept flying open, hence the generous application of duct tape above. On the last lap of the day Wallace really went for and just scraped in under the wire.

The race week was a mirror of the May event. The roadsters qualified in 9th and 11th whereas the coupes had a torrid time with gearbox issues and ended up 20th and 23rd. Of course their problems were overshadowed by the first of the Merceds Benz CLR getting airbourne when Mark Webber flipped on Thursday evening.

Webber repeated this horror story on Saturday morning in the race warm up and then almost five hours into the race Peter Dumbreck flew into the trees to take out another CLR. Mercedes withdrew the surviving car and the world's media focused on their very public failure.

For the R8C cars the race was also a nightmare. The 10 car's gearbox failing on the first lap. Changing this took 40 minutes and the car emerged from the pits plain last. The Brits pounded on until around midnight another transmission issue caused another change and another 40 minutes lost. Then car ran at pretty decent pace matching the R8R times but the story ended with another gearbox problem and the car was stranded out on the Mulsanne Straight just after dawn.

It was no better for the 9 crew. Just before the 4 hour point Christian Abt stopped at the entry to Les Hunaudieres with what turned out to be a broken differential. Game over.

The Joest effort prospered, showing the benefit of getting a race under their belts early in the year. The number 8 ran as high as third overall and but for two changes to the engine management system could have finished second instead getting the final spot on the podium. 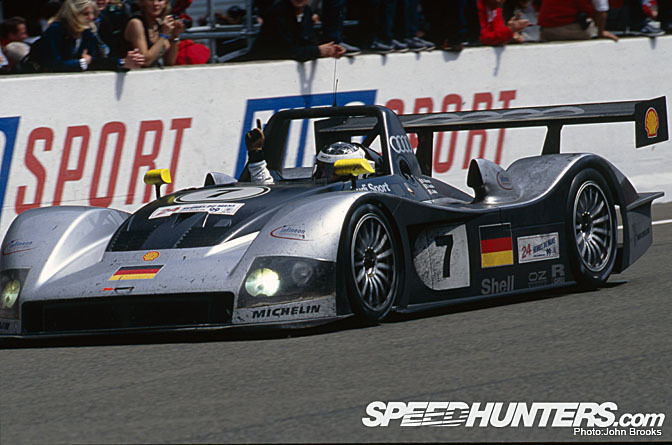 For number 7 it was fourth overall some 14 laps behind their sister car. Four transmission changes costing over an hour explaining the gap to third. Still both cars made it to the finish.

This is a unique picture, Dr. Ulrich, Audi Sport Boss, sitting on the pit wall and not seeing an Audi triumph at Le Mans. The 1999 race was a steep learning curve for the men from Ingolstadt but they would absorb the lessons well and return in 2000 with an all new roadster, the R8 which was destined to become one of the greatest endurance cars of all time.

The R8C project was a case of what might have been. Lessons were learned there too, leading directly to the Bentley victory in the 2003 race, same team, similar concept, different result.

Great article! I love the R8R.

10 years, yet still so modern!

John, look at Ulrich in that last image. That's wild!!!!

Can you please do an in-depth article about the CLR's? They're so beautiful to look at and would be truly deserving of the Silver Arrow moniker if not for their flawed aerodynamics. It would also be a great excuse to show off some of the photos buried within your archives. Pretty please?

Great story John. I was a fan of the R8C's myself, just because I loved the 956 / 962 so much, but was happy that Audi had the "back up" of the R8R there in 1999. Great races back then with so many manufactures involved.

I too echo what Jay says above...the Mercedes...or maybe even a whole series of articles on cars that showed promise, but never got it done at Le Mans.

I remember this was the first Le Mans i had found out about and caused me to watch it annually till this day.

i remember watching the R8's debut in LeMans. it had to pit for a transmission change and the announcer was going nuts on how quickly they got to remove the transmission. i guess that is one of the things they learned from this project

Another great article from you John, I too would love to see an article on the CLR or some of the other cars that have raced at Le Mans, keep up the great work!!

Folks.......many thanks for the kind things you say, happy that you enjoy the features.

Love this stuff keep it coming!!!!!!! I wish they had more closed cocopit cares in le-mons.

Party like it's 1999 !!! OK the year was given some special significance in some areas and by most

Plus ça change, plus c’est la même chose . The more things change, the more they stay