Round One to Karl Wendlinger and Ryan Sharp in the K plus K Motorsport Saleen S7. Starting from pole position and clearly having the legs on the opposition it was a deserved win for the new team.

It was the second time that the pair will get their name engraved on the famous RAC Tourist Trophy, having won in the Jet Alliance Aston Martin DBR9 last year.

The only time that their victory looked seriously threatened was when a full course caution mid race fell the wrong way for the Saleen and this put them behind the Maserati MC12 of Andrea Bertolini and Michael Bartels, that and the slick pitwork of the Vitaphone team.

However as soon as racing resumed Wendlinger soon caught the Italian and was in prime position to take advantage when traffic caused the MC12 to stumble. Wendinger pulled away from Bertolini to take the flag some 5.499 seconds ahead after two hours of racing.

Third a further 20 seconds down the road was the Luc Alphand Adventures Covette C6.R of Guillaume Moreau and Xavier Maassen.

The GT2 class threw up a surprise winner, the Prospeed Competition Porsche 911 GT3 RS of Emmanuel Collard and Richard Westbrook. They had really struggled in practice, only managing 7th in the order but their race pace was sufficient to enable to take the battle for the lead to the Ferrari F430 armada.

As usual the flagship for Maranello was Gianmaria Bruni and Toni Vilander in AF Corse example. Indeed they led the battle for most of the race but the new regulations in GT2 for 2009 has benefited the Porsche teams in their battle with Ferraris. Whether the increased pressure on the F430 was a factor or not, Bruni appeared to have things under control till the last quarter of the race, when the Ferrari's rear suspension suffered a problem that stranded him out on the circuit, 1-0 to Weissach. 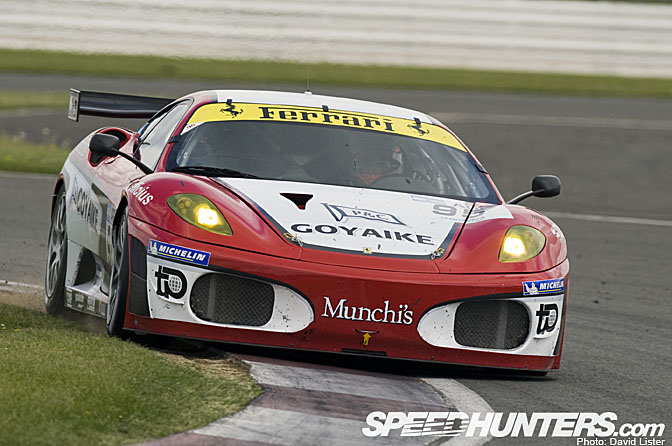 Another surprise was the second place in GT2 for the Argentinian F430 of Pecom Racing. Luis Perez Companc and Mattias Russo had problems in qualifying so opted to run a long first stint and the full course caution played right into their hands boosting them up to third, which became second with Bruni's demise. You could have lit the National Grid off their smiles on the podium……….they were indeed very 'appy.

Third in GT2 was the Andrew Kirkaldy, Rob Bell CRS Racing Ferrari. There are new handicapping rules in GT2 which impose a weight penalty according to how highly the drivers are rated, so 56 was running with 50 kilos of crew handicap ballast (the Bruni/Vilander Ferrari and the Collard/Westbrook entries also attracting maximum penalty) and this meant that closing the gap to the South Americans was impossible. Third was as good as they could expect.

Three cars complying to the 2010 GT1 rules started at Silverstone and their "race" was won by the Matech GT Racing Ford GT driven by Thomas Mutsch and Thomas Biagi. The car is still in the first stages of its development so finishing in the top ten and havinf a trouble free run to tenth was a real boost to the team.

Another 2010 spec car, the Nissan GT-R did not enjoy such good fortune at Silverstone. Despite completing over 6,000 kilometers of testing in the run up to the season they are still getting to grips with the car and midway through the race an issue with the rear suspension caused a puncture and the team decided to retire rather than risk any further problems. Next race is Oschersleben in late June.

The Corvettes struggled with the new standard tyres and complained of being down on power especially against the Saleen. The result seems to have added support to this argument, expect to see some performance adjustment by Adria, probably a decrease in the engine air restrictors.

The MC12s are now in their last season and in my view remain favourites for the titles, The combination of driving talent, supberb team organisation and the well sorted Maserati V12 will prove hard to beat.

They will be on home ground in two weeks when the circus moves on to Italy and Adria.

Great stuff! Will there be some coverage of GT3 and GT4 aswell, pretty please?

Congrats to the K plus K guys, it's nice to see an old war horse back on top. I agree with Rich, GT3/4 posts would be icing on the cake of already great sports car coverage.

Too bad the GTR had to leave early

Ford GT for the win, that wideboy they made for it looks so dope!

Is there any website that streams these races are puts them up on the net to download? Sucks that here we only have the Nascar Channel, I mean SPEED.

an S7 in the rear view mirror is like death, calm and composed. You can do everything in your power to get away from it, but in the end you will be taken.

http://www.gt1live.tv is the only source for streaming that I've found, but they only stream live.

I did manage to catch the warmup before the race at 3am cst...The next race will beat at a more normal time and most people should be able to catch it.

Finally a porsche in front! YES! Does anyone know if the Prospeed car is '09 spec? Doesn't look like it judging by the hood, but I don't know for sure. . . ?

can't wait for the GT3/4 coverage. Thanks John!