Before I show you guys action from the night FIA GT race I thought I should concentrate on the GT3 class. For me at least, these groups of cars were by far the most interesting. I think it may have to do that they are more closely related to their road going counterparts, well for the most part!

Seeing it’s VAG month I definitely think the Audi R8’s deserve special mention, one of the coolest looking cars out on track. Highlighting their already unique lines were a series of very sedate yet aggressive body modifications, not forgetting the huge rear carbon wings.

Just look at that front end! The protruding carbon splitter helps the cars generate high levels of downforce, allowing them to stick to the ground around the faster corners. Audi should be commended for pushing headlight design to where it is now, those front LED driving lights look beyond cool out on track.

The Alpina B6 GT was one of my most favorite cars in the GT3 class, I love how this big, heavy luxury coupe has been transformed into a stripped out race car.

Like the green factory BMW Alpina B6 we saw on the Day 2 post a few days ago, the MP Racing team car above runs the same supercharged 4.4L V8. Check out the massive carbon air extractors on each side of the airbox, pure sex!

Rod an I both agreed that the Morgan was by far the craziest car in GT3. Just look at this thing, so quintessentially British, yet such purposeful as a race car.

Under the skin is the bonded and riveted aluminum chassis, with the BMW 4.8L V8. Surprisingly enough the engine seemed to be positioned quite far forward, but still behind the front axle line.

The F430 is a very popular choice for teams in the FIA GT series and this JMB Racing example looked great blasting around Adria over the week-end.

I dropped by the Team Kessel Racing while they were working on the Ferrari. I always like to take time and look at stuff under the skin, like those intricate cooling ducts that direct air to the discs

Aston in drag? Was wondering why this DBRS9 was wearing lipstick around its grille.

Starting with this Marc Sound Racing Z06R the american line up of cars was top notch.

Like the Vettes the Vipers were stereo backfiring when downshifting, sure makes for a pretty picture.

I don’t know if it’s the perspective, but the rear wheels of the GT40s just look out of proportion compared to the fronts!

The second Marc Sound Racing Vette ended up spinning during the practice session and ending up in the kitty litter.

I think Aston produce some of the most beautiful cars in the world, they are masters of creating designs that look perfectly proportioned. Beefed up for the GT series they are even better!

You may remember spotting the front of this Reiter Engeneering Lamborghini Gallardo peaking through a pit garage on the Day 1 post. Here it is howling into the main straight at Adria, V10 blasting with its intense offset wail.

As we took a walk through the open side of the paddock where some of the GT3 and GT4 teams were set up we spotted this super smooth trailer. Thanks to the covered up wheels it looks like it’s been slammed like a custom car or something. Pretty funny or what! Next up a quick look at the Lamborghini Gallardo Cup which kept the crowds entertained while the big FIA GT boys were taking time to set-up their cars in the pit garages. 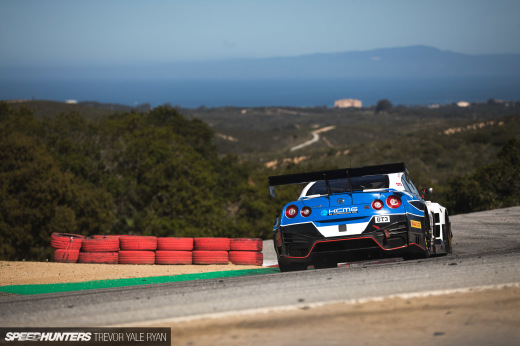 you have to do a story on that morgan...

that thing is soo cool

thanks for featuring that wonderful green so much. I've finally found the color I want to paint my car

we really need some desktops of those morgans

I laughed out loud when Dino said "Seeing as it's VAG month..."

So you can imagine my disappointment when I don't see any chicks and then I realized he was talking about Volkswagens.

What a way to ruin a guys high hopes...