As the sun began to set on race day at Adria the FIA GT cars started to line up on the grid. You could feel the tension in the air as the drivers were getting ready and the mechanics doing final checks on the cars. It would have been rude not to take a few snaps of the pit girls which were loving the attention from the cameras.

Take a look at the BMW V10 powered Wiesmann GT MF5 safety car, sounded amazing out on track and looked very nice in the evening sun with its yellow on black motif. It's a pity nobody races this in the FIA GT championship!

OK so this is a shot I got earlier in the day before the GT3 race, but this "line-up" was something I couldn't help but post. It was so hot on the Adria tarmac that one of the girls passed out and had to be taken to the medical center. I'm sure those black uniforms had something to do with it!

Here is Andrea Bertolini being interviewed by a TV crew next to his n.1 Maserati MC12.

I can't wait to see the final montage of the video the guys filmed at Adria!! The MC12 simply dominated throughout the week-end.

Bit of a nationalistic image here, but hey I was in Italy, I'm Italian, you don't like it, look elsewhere. LOL

I loved the RSR's exhaust, the twin tips pop out at a cross-eyed angle but didn't seem to create as much spectacular backfires as some of the other cars. German engines are far to efficient for that hehe

The two Vitaphone Maserati managed to set the two fastest qualifying laps, landing them on the front row of the starting grid.

The n.4 Z06 of Kumpen and Hezemans was the last car to arrive on the grid, lights blazing and ready to go!

I just had to grab a picture of Ferdinando Monfardini's carbon fiber helmet. Wonder how much something like that would go for!?

The matte-black Matech Ford GT is one of the best looking cars in the whole GT1 class. Looking at it head-on it is just so damn wide thanks to those extended fenders, all in one piece with the bumper/hood section. And you have to be careful you don't step on the splitter as you walk around it!

Biagi was telling Rod and I how he loves to drift his BMW street car around wet roundabouts! Top guy!

Monfardini puts his carbon helmet back on before getting into his Saleen.

I though this was a pretty cool place to put the Saleen logo, it was just begging for a picture!

…in fact I noticed that for a European GT series there sure are a lot of American cars being used. And the noise alone makes them worthy participants. 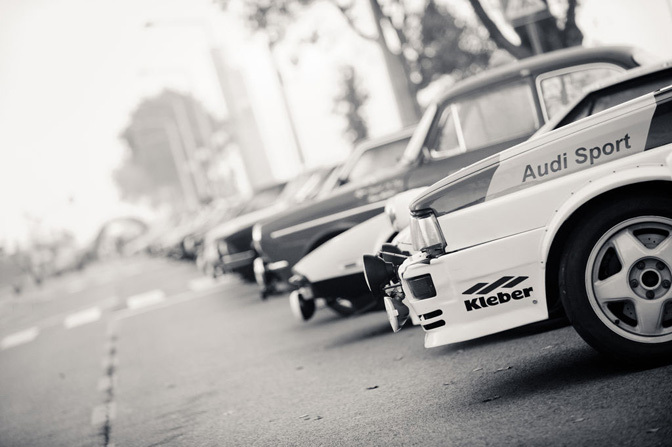 Great Shots especially the ones with the pit girls !

Surprising how good looking women can be when they're all covered up, huh? (Too bad American chicks don't catch on to that.) Even the Japanese umbrella girls are pretty covered, and still amazing.

Love the shots, wish I could stand that close to that F430, but I'd probably die of happiness at that point...

I am going to miss the MC12's when they leave, what an amazing car with incredible looks to boot. I wish I could afford a street version as I would not be caught dead in an Enzo hehe.

Does Pratt & Miller make the Z06R?

I think someone made a mistake. I am pretty sure the "Z06" in the photos above is a C6R which has nothing to do with the Z06R of the GT3 class.