Now that the excitement of Sebring has subsided we kick start motorsport in Europe. In the next few days there is LMS at Barcelona, BTCC at Brands Hatch and then a quick blast up the highway to Le Castellet and the FIA GT media days. So here on SpeedHunters it is time to have a look at the gravity defying Le Mans Series. While doom and gloom is the order of the day elsewhere the LMS contrives to have almost full grids and folks jostling to get in, well almost.

The 2009 series consists of 5 rounds, (5th April Barcelona, 10th May Spa,  1st August Algarve, 23rd August Nurburgring, 13th September Silverstone) Each race is a distance of 1000 Kilometers or 6 hours, which ever comes first. There are 4 classes of cars that are qualified to take part, complying with the same set of rules that the Le Mans 24 Hours is run to.

The top class is LMP 1 Prototypes, aimed at factory and professional teams. The cars can be open or closed and can run petrol or diesel engines which are limited by cubic capacity according to type (6 litres for atmospheric, 4 litres for turbocharged, 5.5 litres for diesel.). 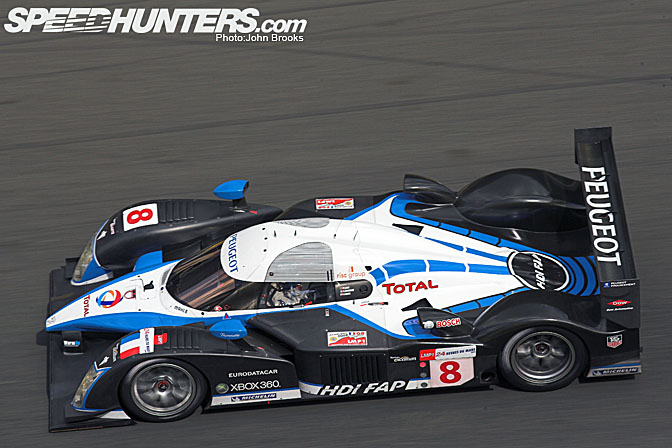 The cars must weigh at least 900 kilograms and have to be homologated by the ACO who lay down technical and safety standards. Cars that are built to these rules include the Audi, Peugeot and Lola Aston factory projects together with top professional teams from Pescarolo, Oreca, Ginetta Zytek and others.

The second class is LMP 2 which is aimed at private teams and non professional drivers, once again these cars can be open or closed.

The minimum weight for these cars is 825 kilograms and they are restricted on their choice of engine which are much less powerful than the LMP 1 cars. There is a wide variety of chassis employed in this class, Lola, Pescarolo, Courage, Radical, Lucchini, WR, and Zytek all offering different solutions. They are powered by engines from Mazda, AER, Judd and others.

Grand Touring (GT) Racing has been a feature of endurance competition since the early days and the heavily modified LM GT1 class is always popular with the fans. The cars must be developed from road going models with a minimum number to be built according to the size of the manufacturer. This category features a diverse set of cars such as the Aston Martin DBR9, Corvette C6R, Lamborghini Murcielago R-GT, Saleen S7R to name a few. There is a minimum weight level of 1,115 kilograms and the engine size is restricted to 8 litres for atmospheric and 4 litres for turbocharged, which are designed to punch out around 650BHP.

The next class is LM GT2 which once again is based on road going vehicles but with less power (around 450-500BHP) and the same weight as LM GT1. The main protagonists are the Porsche 997 and Ferrari 430 but the category has diversity and also features others such as the Aston Martin V8 Vantage, Spyker C8 and Lamborghini Gallardo.

At the top of the field there have been major changes since 2008. The big guns, factory teams from Audi and Peugeot, have stood down from the series due to the economic situation and their abscence has left a big hole in the marketing effort and finances of the LMS. However Peugeot will be back at Spa and maybe some rounds after Le Mans and it is hoped that both will return full time in 2010. Their departure has been partly cushioned in sporting terms by the late launch of the Lola Aston Martin project, backed by the iconic Gulf Oil brand. We have had a look at the car earlier but the team is under extreme pressure after Tomas Enge destroyed a chassis at the LMS Test days, getting the second car ready for this weekend's race in Spain has meant long, long hours for the Aston Martin Racing team. But knowing the guys from Banbury they will be on the pace.

AMR will be up against the crack Oreca outfit who will field two Aim powered Oreca Courage LC70s one for Stephane Ortelli (1998 Le Mans winner) and Bruno Senna (nephew of the incomparable Ayrton).

The other car will have Olivier Panis (Grand Prix winner) and Nicolas Lapierre on driving duties. Oreca struggled in the face of the factory diesel onslaught in 2008 but they are proven winners in every aspect of the sport, last year they took Yvan Muller to the WTCC title, so expect them to feature strongly.

Tough French opposition will come as ever from Pescarolo Sport who are LMS winners in the past and always put up a strong show.

An unknown quantity will be the ex werks Audi R10s run by Colin Kolles. The team is staffed with a lot of old hands and the driving line up is a mix of experience and youth. Ex F1 pilots Christian Albers and Narain Karthikeyan join GP 2 refugee Christian Bakkerud in one car. In the other Michael Krumm, a factory Nissan driver, leads the relatively inexperienced Andy Meyrick and Charles Zwolsman. The R10 seems difficult to drive right on the limit and only the McNish/Kristensen/Capello trio consistently got the most out of the car, so it will be interesting to see how this new endurance team gets on, something of an outside bet. 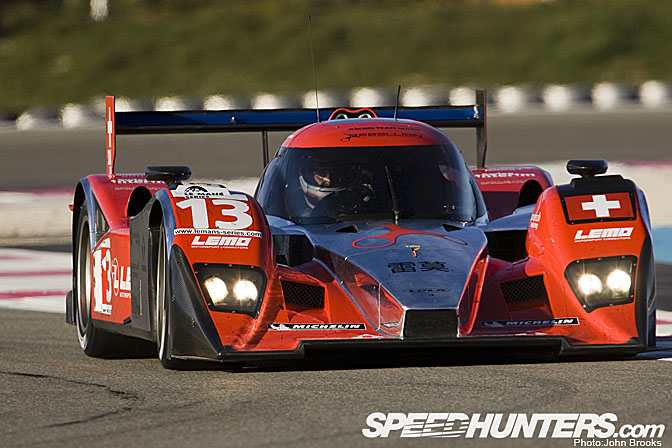 Another outside bet will be the Speedy Racing Lola Aston Martin. This effort is highly rated by Lola's personel and tipped for good results with Marcel Fassler leading the driver roster and joined by Andrea Belicchi and Nicolas Prost. Yes that Prost………….with Senna, Prost and Leo Mansell all racing in LMS it could be an 80's Grand Prix rerun.

The final regular in the LMP 1 class is the Ginetta Zytek of Danny Watts, Peter Hardman and Nick Leventis. Danny will certainly get the best out of the car and podiums would not be a surprise result later in the season.

On to the LMP 2 section and while it is unlikely that these entries will challenge for outright honours, the battle for class points will be as hot as anywhere. The RML Lola B08/80 powered by a Mazda engine will be a strong contender for the title. Their strongest challenge could come from the similar Lola Coupes of Racing Box but they are in a race to finish the cars off before this weekend, the Andrea Piccini, Matteo Bobbi and Thomas Biagi effort is perhaps the class of the field.

Another competitive Lola B08/80 is the Speedy Racing effort.

The main opposition to the Lolas will come from the Zyteks, in particular the Quifel ASM team with Miguel Amaral and Olivier Pla at the wheel.

Oak Racing will have 2 Pescarolo Mazdas on hand but might struggle to hold the best Lolas and Zyteks.

As might the Bruichladdie radical with veteran Pierre Bruneau leading the charge.

After a dismal season in 2008 the Lucchinis return for Raniere Randaccio and Q8 Oils Hache teams.

Another small French team, Pegasus Racing Courage C75, one of two on the grid.

Final prototype is the WR, a long time competitor in endurance racing.

The LM GT1 entry is very thin, with the honours looking to go one of three cars. This Lamborghini Murcielago is easily the best sounding thing on the track, the howl of the V12 is worth going a long way for.

Jacques Leconte always runs a tight ship so expect the Labre Competition Saleen S7R to be up at the front.

Favourite to retain the LM GT1 title is the Luc Alphand Corvette C6R.

There are no fewer than 8 Ferrari F430s in the line up at Barcelona, probable top dog is the JMW Motorsport version for Rob Bell and Gianmaria Bruni.

New boots for the LMS, Hankook Tyres could spring a surprise depending on how their rubber compares to Dunlop and Michelin.

A strong performance is expected from Team Modena with Antonio Garcia (on a roll with wins at Daytona and Sebring) and Leo Mansell.

There will be a singleton entry for Dutch constructor, Spyker and this also marks a welcome return to the series for spectacular Touring Car ace, Tommy Coronel.

When not trying to get some financial sense into the UK Government Lord Drayson will race his Aston Martin Vantage GT2 in the LMS.

Based on the performances at Sebring the favourite for the GT2 crown should be the Felbermayr Porsche 997 RSR of Marc Lieb and Richard Lietz. No customer Michelins this year either.

Another competitive Porsche will be the IMSA Performance Matmut car for Raymand Narac and Patrick Pilet.

So there it is, 45 cars scheduled to be in Spain and more to come throughout the year and no doubt a few to drop away.

Reports from Catalunya during the weekend.

desktop on the top aston please

Nice write up John and stunning pics as always

Mr Brooks, your imagery both textual and otherwise never ceases to amaze, keep up the great work!

Glowing front rotor and blue flame out the exhaust! Not to mention a perfect pan!! A John Brooks Masterpiece

Yes, please make a wallpaper out of the Gulf Aston Martin. That car is just so damn sexy.