If the Lamborghini Murcielago LP670-4 SV was not extreme enough for you, let us introduce you to Ferrari’s new track day special, the Ferrari 599 XX.

Images from Swiss car site, Asphalte.ch who photographed the car at Geneva.

The 599XX followings the Enzo based FXX with dramatic race car inspired styling and graphics. This car is a test bed for Ferrari to showcase their new technology.Based on a standard 599, the engine is lighter and has been uprated to 690hp.

The biggest change is to the bodywork. Like the FXX, this new car has extra vent’s gills, winglets and diffusers all over the car. Wind tunnel tests suggest the changes produce 630kg of downforce at 185mph, which is impressive for a roadcar.

Some of this is downforce is produced by two fans which sucks airflow from under the car, accelerating it out of the car where the rear lights sit.

As you would expect, Ferrari have also uprated the handling with new brakes and suspension.

I am not a fan of current Ferrari styling, but I like this. Maybe its all the aerodynamic aids, covering up some of the standard 599 shape!

If you are interested, then you will have to wait by your phone. Ferrari will be pre-selecting customers!

Asphalte.ch have more images on their site. Meanwhile, if you prefer the Muricelago, then I’ve added a couple of new shots to the original article, posted yesterday 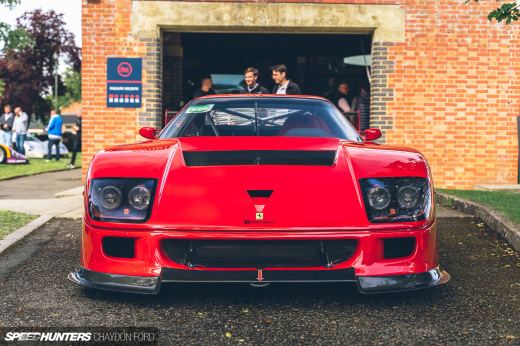 That Carbon Ceramic brakes are insane!

i'm not a fan of Ferrari, but this car is REALLY sexy, well done

That isn't a brake disc. That is a disc from TRON, and that is really a Lightcycle.

I said it on Jon Sibal's blog two days ago and i'll say it now, i think Ferrari has lost it, especially when it comes to styling

Nice car.. but..there is something strange in the desing...it resembles to a toyota supra...just check the lines, the roof and the body in the close ups...

what does it say on the front brake rotors?

@ Kniewel: It says "wheel donut". borrowed from their F1. Increases aerodynamic, while keeping the unsprung weight to a minimum.

The car's technology is very clever.

I remember when the 360 Modena came out, it had a flat pan underneath the car that resembles a golf ball (with dimples) to increase aerodynamic and decrease drag.

well, i dnt pretty like the taillights...but who'd say no to this car???

I'm not really quite liking this car because it seems like ferrari is trying to make a "new" kind of racing car instead of sticking with the good old formula with the scuderia, (spelling?). Love the wheels and the brakes but not the random spoilers coming out of the side.

I don't really like it - the Lambo from yesterday (although not as 'racer') wins hands down in the style department... although it did have a nicer base to start from. Tail lights and winglets are pretty naff.

Styling's not really for me, but I like the idea that they have incorporated the use of the Venturi effect just like Chapparal did.

I want to hear it.

Ferrari lover for life. I wish I could have this car now!!

Those wings sticking out on the sides are not pretty. Or maybe I should say that 99.9% of people out there don't like it. I don't either. It is aesthetically not pleasent. However, since some of you follow F1, you should have noticed by now the amount of crazy aerodynamic bits and spoilers those F1 cars have.

Ferrari is trying to incorporate this idea on this car; that BTW as said before, it's STRICTLY a race car, much like the FXX, so I'm sure those ugly wings serve their purpose.

"Some of this is downforce is produced by two fans which sucks airflow from under the car, accelerating it out of the car where the rear lights sit. "

Better photography please. The lighting is terrible. The subject car is red and black, and the edge is lost into the background where another red car of identical color tone, and black walls and ceiling. No detail can be seen in the shadows. Where are the details in the rear under pan, the brake rotors, the rear window, the C pillar canards, front air dam? I have my MagicBright monitor turned all the way up and this still looks like someone took pictures of a Dodge Shadow in total darkness. Even poor photographs could have been corrected with some time in photoshop cranking up the brightness and contrast.

"Some of this is downforce is produced by two fans which sucks airflow from under the car, accelerating it out of the car where the rear lights sit."

Seriously, I doubt any downforce is generate by fans (well, anything more than a pound or two as a consequence of something else).

Roughly 90% of the downforce would be generated by the underbody, 5% from the front splitter and 3% from the winglets and the last 2% from the rear spoiler.

how did you get those percentages?

Have a google of the Brabham fan car, or the underbody/aerodynamics of the McLaren F1.

The fans suck air from under the car, acclerating air flow, this helps suck the car to the ground, downforce. As the air exits from the back, there is little drag cost to this. An extra benefit of this, IIRC is the accelrated air has an affect on the turbulance at the rear of the car. I can't remember if it cleans it up or if it reduces it, but there is a benefit...hence why a similar thing was tried on these two aforementioned vehicles (and banned in F1)

The rear wing has a gurney flap on it so that will increase downforce quite a bit (I'd say more than 2%). Years ago in a previous life I was involved in wind tunnel work on a Yamaha supercar. Admittedly it had a concave surface on the engine cover which helps with aero, but a 2mm Gurney added a huge amount ofdownforce...Problem is Gurney's also add Drag

Oyaji - not our photos and Ferrari chose to release only one press image.

Those brakes look awesome. But those side spoilers make it look like the Flying Nun

The Brabham F1 car was the last car to use fans to generate downforce. The McLaren F1 used ground effects (like the Lotus 78, and almost all subsequent F1 cars, and like all modern prototypes). Also, fan cars like the Brabham and the Chaparral need sliding skirts for effectiveness. There is little point to going forward with all that hassle if you can just properly design an undertray to take advantage of ground effects.

By ground effects, I mean using the underbody to accelerate the air and using the interaction with the ground to further increase the effectiveness of the accelerated air. Given that, I am lumping all cars that use their underbody to generate downforce with accelerated air in ground effect into the same category, irrespective of whether they have tunnels or a flat-bottom and diffuser, or even a raked flat-bottom.

The air becomes accelerate due to a nozzle effect generated by the splitter on the front creating a pressure gradient that pushes ambient air under the splitter, and the shape of the leading edge of the splitter, designed to encourage air to go underneath the splitter. That accelerated air continues until the diffuser, where there is a low pressure spike at the mouth, and then it slows down and increases pressure

The rear gurney on the spoiler would cause more than a 2% increase in overall downforce, but mostly due to the low pressure zone behind it sucking air out of the diffuser, not due to the increased pressure on top of the spoiler. Going back to what I said in the previous paragraph, if you lower the pressure behind the diffuser (either by mounting a low wing, or a gurney on top of the bodywork), you'll accelerate that air even more, and thus create more downforce.

As for the values, it's not hard to ballpark it. Force = pressure x area. There is a huge area under the car, way more than even an F1 car. Those tiny little winglets would need incredible efficiency if they were to generate much downforce... and same with the little spoiler. Bernoulli would get a headache if they generated much downforce in comparison to a huge undertray and diffuser... haha.

As for knowledge, I've worked on CFD (mostly during my mechanical engineering education), designed two rear wings for racing cars (one single element, one triple element), and designed and built the aerodynamics for the Corvette I used to race, with the exception of the Prodrive wing used on the car in the last year and a bit I raced it (it was massive... and since force = pressure x area, it generated that much more downforce). No wind-tunnel experience yet... but I'd like to.

I wouldnt kick this car out of my garage, But it certainly would not be the first on my list of cars to buy in the event of a windfall.