It's very difficult to blend in when driving a Mustang in Japan, especially when it makes all sorts of loud noises and is a model most people here have never seen before. Needless to say, JR didn't have any intention of trailering his car around from track to track. Heading out for an early start after a very late night, we left Osaka and drove south down the highway towards Okayama Prefecture.

The car really does attract a lot of attention everywhere it goes, especially since it is constantly surrounded by a large group of foreigners. These two guys were working at a food vending stand at a highway rest stop, so after JR bought a couple of snacks, he brought them over to have a sit in the car and rev up the engine.

Bihoku Highland Circuit was our main destination for the day, so we could set JR loose for the first time on a Japanese track, inspired by what he had seen the night before on the streets and in the mountains of Osaka.

The car had no problem powering out of corners, as you'd expect…

…but JR had no trouble getting the tail end right up near the dirt wall lined the outer side of the first corner.

Naoki Nakamura had also managed to get up early and come out for the day, less than five hours after we left him and his crew the night before on the roads of Mt Rokko.

Needless to say, his entries were amazing.

JR hooked him up with one of the tour stickers for his car.

Editor of Super Street magazine Carter Jung shot a bit of Naoki's car too, so check it out in an upcoming issue.

In case you're wondering what the interior of his car looks like, here it is. He's had the same steering wheel for years, but several S13 Silvia shells.

JR was determined to keep up with the local masters, with fast switch entries…

…full-throttle through the corners…

…and smoking it up on the exits.

Here's JR's mechanic Mickey being interviewed instead of doing something useful, like changing tyres.

The only real hiccup the car had during the day was when it threw the engine belt after one particularly hard session. After wrapping on a new one, the car ran strong for the rest of the day.

The guy on the left is Ryusuke Kawasaki, the editor of Japan's monthly Drift Tengoku magazine, taking a photo of Mickey drawing a pulley diagram on his work glove so he can remember how to put the belt back on.

Some other cars had actual day-ending problems, like this destroyed timing chain.

It's not only the guys in Japan that think the Mustang is cool.

This is Maki. She drifts a pink S14, writes a monthly column for Drift Tengoku and lives in nearby Tottori. Of course, JR had to take her out for a joyride.

It's surprising that JR's wrist isn't sore from all the shirts he has autographed so far.

Haruguchi's personal S14 that he brought along didn't disappoint.

It didn't just sit in the pits either. He took it out for a good thrash with his buddies.

A member of Haruguchi's 326 Power crew, Takeshi Shinkawa was awarded second place at the 2008 MSC Round 10 competition that was held at Bihoku.

One of the reasons JR came to Japan was to share American car culture with local Japanese drifters, since they were the ones who gave drifting to the world. I think this photo sums up that sentiment pretty well.

Here's what we came to see.

No smashed aero on the Mustang, but there was plenty everywhere else.

On the way back to Osaka, we stopped off at Car Factory Ai, who specialise in naturally-aspirated circuit-racing cars. Shop owner Ai reckons that everyone who goes drifting should also go circuit racing.

Who would have thought JR could actually fit inside a Suzuki Cappuccino? 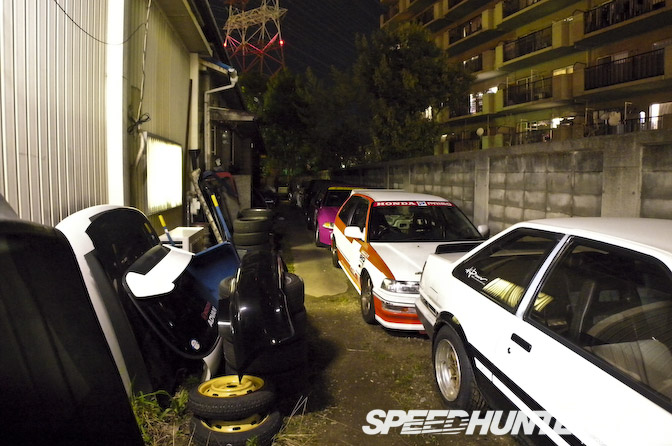 While he shoehorned himself out of the little kei-class racer, the rest of the crew took a look around the workshop. Even though we had to get going early again in the morning, it was going to be another late night of off-key singing at a karaoke joint. The following day was supposed to be a pleasant video shoot for Best Motoring's Hot Version DVD series, but the weather had different plans for us. More to come from JR in Japan!

The triple drift picture is pure SEX. SEX SEX SEX (sorry for profanity, but you know you guys agree.). I'd like to see that as a desktop.

This is one of my favorite articles yet on this site.

Awesome article! Though it's a really underground "event" (if you can even call it one) it's turning out to be one of the most interesting coverages i've seen in quite a while!

It's incredible how the clash of cultures is so easily overcome by the common element of drifting. It just comes to prove that drifting really promotes bonding and how everybody can be buddies in and out of the track!

You guys should really see the local guys revving up the 'stang though - it's so cool ^_^ - - > http://www.youtube.com/watch?v=YclaB7jdgAU

I have a BA in Japanese and a DSLR, how can I get your job man?? Great photos and writing, really enjoyed this.

wallpapers of the 326 cars please. PLEASE.

I want to see a better shot of the rear diffuser on that Mustang!!

I think its cool that the japanese enthusiasts are really enjoying JR's tour and excited to see him there. Like he's an equal. Just cool!

i cant believe im saying this but i think im falling inlove with the new mustang. >_<

JR's car is so well done. i like the simple yet aggressive look to that car.

man i wish you guys could drop by to our country and show what hardcore drifting is.

and i'd love to have a shirt from JR as well. XD

picture 22 (girl checking under the hood) is pretty much desktop worthy. but all of the pictures of of the mustang in action is desktop worthy as well. i'd take any of those pics and make it my desktop anytime of the day.

that mustang rocks! and JR rocks!!!

PS: having issues here at the office. it wont let me log in properly at speedhunters somehow.

once again.... dope article. big ups to JR and super UPS to Alexi

That is just awesome. Soooo jealous.

My two weeks in japan were awesome but no cars

Alexi, your doing a great job replacing Mike for these articles of Japan. You guys seem to have so much fun with each of these articles, can't wait to read the rest of the story....

Man, I'm so jealous at the fact I didn't get to go to any tracks on my trip to Japan! Can't wait to see what Andy and the other camera ops caught! JR's living the dream! Also great job to Alexi for the awesome updates!

wow. the new mustang is 100x better looking than the current model.

I love the S13 steering wheel! WHat brand/model is it?

And can you post more pics of Car Factory Ai on Nori Yaro?

that asian chick would get it ^_^

wow. the new mustang is 100x better looking than the current model.

3rd PIcture from the top... right side.... IS that Red car another New Mustang??

Please, that triple tandem picture is sooooo going into the desktops! Please!

ya, they brought two over, here's teh vid from Jr's youtube channel, the clip of the two 'stangs is at the end

well, I think it's very nice to have a feature of people sharing good moments and hanging out with pro drifters, you need to do this more often! Awesome read. ohh and btw, what are Naoki's pants? I need to get a pair

I just thought that it was funny to see Haruguchi getting an autograph from JR.... being that they're teammates (Former?).

Good to see Mickey getting dirty with the Mustang!

What brand taillights is Haruguchi running on his zenki? I need to get me a pair of those! *drool* Also, can anyone spot what rear spoiler Takeshi has on his S14? PIC 29. DESKTOP. NAO.