Late last week, I noticed that Detroit based photographer, Pat Daly’s Facebook status stated he was going to be heading out to the Detroit Autorama. I immediately pinged him to see if he could grab some snaps for Speedhunters… This is one of the world’s most important car shows, so it’s essential to get a least a bit of coverage on the site no? Thankfully, Pat agreed to send a few pics my way.

Do you guys know this car? It’s the Big T, one of the most important machines in the history of rodding. It was constructed by famed builder Darryl Starbird in 1961 for Monogram Models to accompany the release of a 1/8 scale plastic model kit….. This is a piece of living history….

I know the tri-five Chevy’s: the 55, 56 and 57 models are some of the most popular 1950s American cars going, but for me, I prefer the early 50s models…. they made perfect customs when done in a clean traditional style. This car is soooo me…..except, maybe, the colour….

This Nova is pretty serious. I am seeing more and more, full street
machine builds on 1970s chassis… makes you wonder what’s in store for
all the 1980s muscle cars currently rotting on side streets across
America. Will we be seeing mega-budget 5.0 Fox Mustang street machines
in a few years time?

I’ve started to notice Hot Rods with a high stance and uncut roofs… Perhaps you could call this 1940s style, as the overall silhouette is more indicative of the early days of the scene.

Is this a custom or a lowrider? The wheels almost look too large to be considered a proper lowrider no?

Here is the winner of the coveted 2009 Ridler award. It’s a 1932 Ford called “Deucenberg”. Personally I’m not that big a fan of these gizillion dollar builds, constructed for the pure purpose of winning awards… but that’s just me. I like street cars.

The golden age of Detroit feels like a long time ago doesn’t it? I sometimes feel a bit sad when I see the great, iconic cars they used to build in Motor City. How the mighty have fallen!

The basement at the Autorama has become known for its collection of rat rods and other new-old school style grit machines.

Hmmm… this custom wagon is almost a bit gasser-like…. Those radiused rear wheel arches are more reminiscent of gassers rather than customs… I also like the combo gloss roof with the satin painted body.

This is a rather interesting car to be at a hot rod show don’t you think? A rather full on Sunbean Tiger… Take one British sports car chassis, add lots of American muscle and what do you get? Pure mayhem.

We featured the Golden Submarine as part of our SEMA coverage last November. It looks very wee doesn’t it?

The future of rodding is here…. This is the Cadillac VSR, a forward thinking, manufacture themed rod. It’s quite successful don’t you think? The brake ducts are a nice touch.

In my mind, low profile tires should be kept well away from Hot Rods and Customs…. but….. I think these Toyos work on the Caddy-Rod….

If the Cadillac VSR is a present day vision of a corporate styled future, then this is shiny piece of art is a past vision of future atomic powered times. Which do you like better?

When was the last time you saw a Gremlin driving on the road? It’s amazing to think that a total of 671,475 of these cars were built from 1970 through 1978. I wonder how many are still running.

Perhaps I’m a bit mad, but I think this car is kinda cool.

Looks like Chip Foose has finally completed his own take on the traditional rod bandwagon. Do you like it? I think the retro airplane theme is perhaps too strong, I would have made it just a bit more subtle…. but then again I’m not Chip Foose am I?

I see we are back down in the basement. This wood bodied truck reminds me of all the weird themed Rods from the 1960s, but done in a traditional style…. Pretty mad.

This is the hardcore way to display your car at a show isn’t it?

Here’s another Darryl Starbird (was that his real name?) creation. We featured this ’56 Thunderbird during SoCal month last October….. 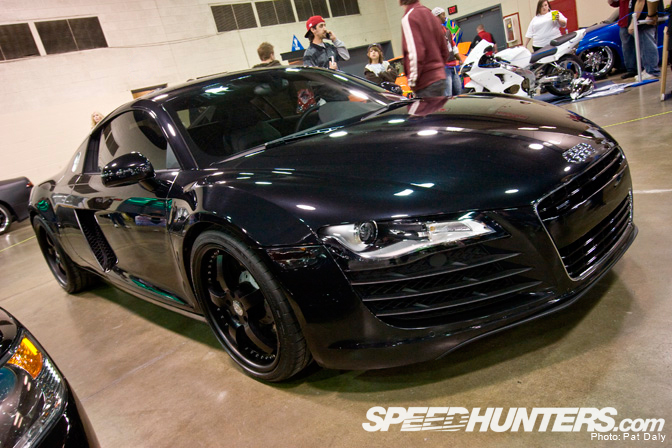 Hang on a second what’s this car doing at the Detroit Autorama?

I am confused…. Surely Hot Rods, Customs, Euros and Sport Compact cars should be kept far away from each other at all times no? :>

Thanks to Pat Daly for the photos!

hey i was there! i hope theres another post on this cause there were tons of interesting cars there.

As a modern car geek, I love to see all the Hot Rod coverage. There's another level of craftsmanship when you can alter the frame and body so freely.

Any idea on who built the Pro-Touring Nova? Thing is out of control on all levels.

My girlfriend's brother has a 73 Nova. Black with it's original yellow bleedinh through. I have to show him the Nova featured above. Oh and more gasser style cars please...

digging the euro styling on the DB7 there, i don't normally enjoy acuras/hondas but this would seem to be an exception!

I believe the Nova is "Notorious" built by Rad Rides by Troy. There are some vids of it floating around, it is a SERIOUS beast.

I quite like the wood body truck, and I think that one dudes airplane theam works well, but mostly Im quite pleased to see Old Skhool and New at the Same show toghether. Next step is geting everything mixed toghether, that way People that might not even take the time to look at a certan scene will be imersed in car culter outside of there style of choice, and perhaps they might take an interst in other styles of motoring lifestyles.

there were a handful of nicebuilt gassers at the show, along with a nostalgic funny car challanger. also, do you have any pics of the car next to the golden submarine? it had some sort of 4 cylinder w/ ITB's

That Caddy rod is cool. I really dig the nasty Sunbeam as well. Thanks for posting

I think it's one of those examples of 70's "kitsch" coolness. You know? It sucks so much it's actually kinda cool.

Yeah, the Nova was built by Trepanier. I think I heard it took home like 5 awards too....

And she's definitely a beast.

I want to see more of that Nova

Badass cars? To me they are useless USDM cars for people that are stuck in the past!

I love the gold 56 Chrysler. They are beautiful cars.The Gremlin X is cool too. My dad had a metallic purple and gold 72 or 74 Gremlin X with the 304 C.I. same block V-8 that AMC made. He said it was like a go-kart with a V-8. A scarey ride when you got on it. Some guy has a 1400h.p. Gremlin that he runs in the 10.5 Outlaw class that can almost do a back flip wheelie off the line. The best part it is all AMC. The Autorama is one of the only in door car show that are family never had a car in. And STJ people that are stuck in the past( like me with my 66 Dodge Coronet ) do it for the love of the cars. And a built up old car will scare you more in the fun way then that little Integra ever will. I my eyes it takes more knowledge to build something old then new, trust me on this I have built both new and old cars and I'm ASE trained tech. Any ways kick ass work like always guys.BOOOSH!

BTW, I think it's cool that hotrod, import, and euro guys can get together for a show. Even though I lean more to the old skool stuff and VWs, I enjoy all types of cars and it's awesome to see all groups representing and getting together.

ryoga81 5,000 Integra? Isnt those HRE wheels on there and a Kswap? Dont worry its only right hand drive with a custom cage. I am sure they did that all for under 5,000! Appreciate the work. Dont Hate.

I love that 61' chrome bubbletop T-biird, this is like the 3rd time i've seen it, and im blown away again and again. The big T is sweet too, as well as that road race styled sunbeam, those diamond racing wheels make it look super mean!

Contrary to popular belief, there are parts of California other than "SoCal" or NorCal". I grew up here in Fresno, which is basically halfway between San Francisco and Los Angeles. I like being here because I can easily jet off to any part

Awesome show...did anyone notice the vans on display??? About time some of the finest custom vans in North America were represented in Autorama!