Usually the best is saved till last, well that idea is turned on its head for the 2009 ALMS season. The first round, the Sebring 12 Hours, held last weekend in the Central Highlands of Florida, will surely be the strongest event in the series in terms of competitors, quality and attendance. At the sharp end there were two new models from Audi and Acura to take on the Peugeots. At present this is the only time that these three brands will go head to head as neither Audi nor Peugeot will be back to the ALMS and the Japanese are by passing Le Mans. Still with six top line prototypes there was much to cheer those in attendance.

Those of you paying attention will already seen the result. The Audi R15 TDI of Allan McNish, Tom Kristensen and Dindo Capello ran out winners by 22 seconds from the Peugeot 908 HDI of Sebastian Bourdais, Stephane Sarrazin and Franck Montagny. In overall race pace the two teams were evenly matched and the victory could have gone either way, the difference was down to a combination of slow puncture, a spin for Bourdais and McNish's ability to drive flat out all the time, traffic or not. Allan was by some distance the class of the Audi driver line up, the post sunset duel with Bourdais was a highlight of the race. Both cars running at around lap record pace, watching them dive into Turn 1, absolutely balls out…………………..lap after lap. Bourdais ended up with a new lap record over a second under the existing bench mark.

The number 8 car started from the pit lane, having been pushed off the grid to facilitate a late change of a hydraulic pump, the time lost in catching up would be crucial at the end of the race. The R15 and 908 were pretty evenly matched on the track but differences in tyre strategy would create an ever changing pattern in the race. Audi singled stinted their tyres, costing 25 to 30 seconds at every stop, which they struggled to make up as the 908's tyres eventually went off at the end the second session. Audi had virtually no dry testing prior to shipping the cars to Florida and such as they did manage was all done in the cold. So how the Michelins would hold up in the Florida heat was unknown territory. Conversely once the sun went down the Audi seemed to get more out of the soft Michelins than the Peugeots, giving great assistance to McNish in his last hour's battle with Montagny.

Peugeot had made big progress with their pit stops, no longer handing Audi an advantage at each stop, when the cars get to Le Mans this part of the contest will be paramount.

While number 8 played catch up at the opening hour its sister car disputed the lead with the Audis. McNish went off at the start like a scalded cat, the top shot shows his lead after 2 laps but the first Full Course Yellow dragged the Scot back into the clutches of Pedro Lamy in the 908. The two Audis and the two Peugeots were then trading positions for the first 4 hours, with Capello struggling with overheating brakes, cured by a change of nose section.

Number 7 eventually fell off the lead battle as a result of needing repairs to the air conditioning system, mandatory in all closed cockpit cars this season, this cost 5 laps. Then late in the race it ground to a halt down the Ulmann Straight, transmission failure was the common assumption, though one rival driver said he saw blue smoke from the engine bay………………..

The number 1 Audi did not have quite the pace of its fellow R15, though Lucas Luhr, Mike Rockenfeller and Marco Werner soldiered on to third position. Werner was severly hampered by a broken rib, the bumps of the old airbase would have done nothing good for that.

What though of the Acura effort? Thursday's qualifying session saw Scott Dixon snatch pole position for De Ferran Motorsports at the last second, bringing a huge smile to the face of ARX-02a's designer Nick Wirth. You could have lit up South Beach with the intensity of that grin. Team leader Gil de Ferran opted to take the start but was jumped by McNish out of Turn 17…………but the the guys dug in and were still on the lead lap at half distance but then dropped down the order having to repair a detached skid plate. A couple more hours and problems with the front suspension and suspected fuel leak meant that the team had to call it a day.

The Acura had the measure of the diesels in the corners but struggled on the straights. "We're lacking in straight line speed but are eating them alive in the corners" said a philosphical de Ferran after the race.

Patron Highcroft had a difficult time never getting the Acura onto the same level as the other 5 works cars. David Brabham made more mistakes in the race than he would normally do in a season. Problems with the power steering also slowed things, then the transmisson gave up with a couple of hours to go, things will only get better.

The LMP2 class showed the full extent of the ALMS woeful car count, only three entries, all top quality mind you. Here the Fernandez Racing Acura ARX-1b ruled the roost as might be expected with a fully sorted car. Adrian Fernandez and his fellow Mexican Luis Diaz, took a comfortable and largely trouble free win. It was popular result in the paddock.

Two Dyson Racing's Lola Mazdas were beautifully appointed but soon retired with a full menu of maladies, self detaching rear wings being the most obvious.The team declined to carry on or elaborate on the final straw that caused their withdrawal but for Dyson to quit it must have been serious.

Almost the final chapter in the career of the Corvette C6R, now only two more races to go before the flag falls. As in 2008 the two Pratt & Miller cars were locked in combat undisturbed by any rivals. Eventually Jan Magnussen, Antonio Garcia and Johnny O'Connell bested their sister car driven by Olivier Beretta, Oliver Gavin and Marcel Fassler. The end of GT1 cannot come quick enough.

At least in GT2 there was a diversity of marques and a propoer quorum of racers. Over the past few years the car to have in the junior class was the Ferrari F430 but the rule changes imposed by the ACO over the winter have hit the Italians harder that the Porsches. So going into the race Risi Competizione could not of dreamed of how easy their eventual victory would be. Jaime Melo, Pierre Kaffer and Mika Salo had a clear run from flag to flag, watching faster Porsches self destruct around them. The biggest problem the team faced was trying to get Melo into the USA with difficulties arising in immigration.

At the Green Flag, the Farnbacher Loles Racing 911 GT3 RSR powered into an early lead. The driver trio of Wolf Henzler, Dirk Werner and Richard Lietz started from class pole and looked in a comfortable pace at the head of the GT2 grid.

Around two hours into the race Henzler headed for the pits with differential problems, repairing this took over two hours, game over!

This should have left the 45 Flying Lizards 911 in control but in a controversial incident at the Hairpin, Jorg Bergmeister clashed with David Murry in the Ford GT breaking a rear tie-rod which took 5 laps to replace.

This left the stellar line up of Bergmeister. Pat Long and Marc Lieb with only one option, drive flat out in the hope of salvaging points. Around one hour from the end Lieb tried a risky pass of the Panoz while dicing for third place, this time there was no reprieve. Retirement on the spot was the result and no podium place for Porsche for the first time in 19 years.

The Panoz Esperante GTLM may be a little long in the tooth but with Tom Milner running the effort and drivers Dominik Farnbacher and Ian James giving it 100%, a third place was a just reward.

The Doran Ford GT Mk7 proved competitive in the hands of David Murry, less so when driven by owners David and Andrea Robertson, but it is clear that progress has been made by the team run by veteran team boss, D-i-c-k Barbour (someone who has an illegal name as it turns out). I first saw D-i-c-k at Le Mans back in 1979 when he drove to a second place overall with Paul Newman and Rolf Stommelen in a Porsche 935. Here he was some 30 years later with racing still running through his veins. I bumped into him on arrival in Sebring, nothing has changed, except I have gone grey. 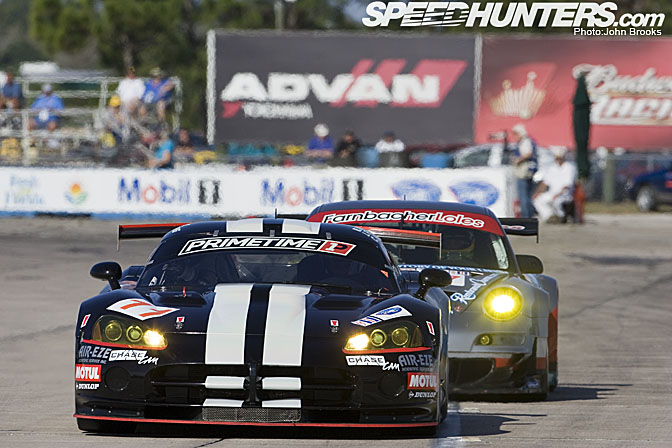 Another old war horse but also a welcome addition to the field was the Primetime Racing Dodge Viper.

It was a steady race for Lord Drayson, Johnny Cocker and Rob Bell in the Aston Martin Vantage until 8 hours had passed when the V8 went bang, not good with Le Mans coming up.

Here it is racing with the other big arrival to the ALMS the Rahal Letterman Racing BMW M3s. 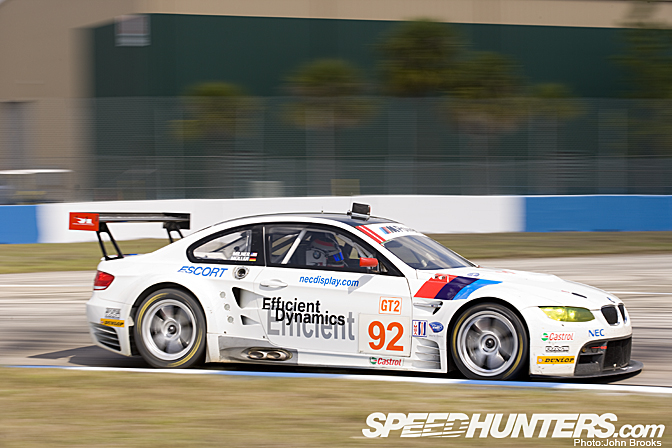 The M3 looked great and was competitive in the bit of the race that it managed to run but suffered new car problems, one car refusing to start until 40 minutes into the contest. Both retired with some form of engine issue or so it was rumoured.

Sebring 2009 will be the high water mark for this year's ALMS, unless the world's economies improve dramatically, and that's in the notgonnahappen.com territory right now.

Audi did a stunning job with their new car, Peugeot showed that they are ready for a win at Le Mans, it would be a brave man that bet against them, it is perhaps their time. 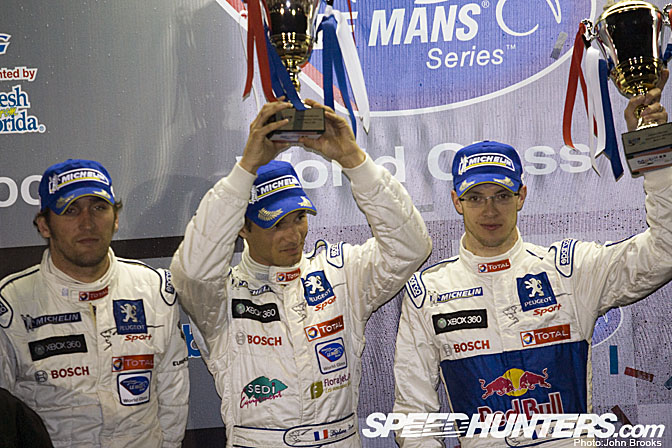 One worm in the apple, there seemed to be some form of conflict in the Peugeot crew at the podium ceremony, with Montagny and his co-drivers not speaking or celebrating the fine second place. hopefully this will blow over and peace will reign in the Gallic camp. They are too good for that sort of crap.

great pics, but this is old news in the land of the internet. almost a week old LOL

Hey! John Brooks is the man, regardless of the time!

This is the round-up review for the whole event bob, there were 2 separate articles that came out on the day of the race if you had bothered to search before calling it old news.

the news is whatever to me as I couldn't care less about the results, it's all about the amazing photos. I had to stop and look at every picture, great article.

Fantastic images. I like the M3 more and more, every time I see it.

Bob - if you search Sebring, you will see we ran countless articles before, during and after the event. This one is the icing on the Sebring cake

Great race but very saddening that it will be all down hill for fans of the ALMS this season.

But this sucks... The best is over. I want to see a list of cars that WILL continue through the ALMS season.

Excellent, its nice to have a recap since Sebring is the best race in the US in my opinion. By the way John Brooks, I was at Team Modena the other day helpin them move stuff around, and I found a nice DVD you made for them!

your Very kind comments have inspired me to prepare a commentary piece that should get published later today........I hope it answers your questions and points on the ALMS.

Ah good stuff! I love the look of their new Ferrari F430 with the black wheels with the red lip. Did you do any of their British GT stuff last year? I'm only wondering if I've actually seen/met you before without realizing it...