Since I have quite a few friends that own Mazda RX7s and RX3s, I've seen firsthand how fun they can be, and have always had a certain respect for rotary powered vehicles. I even owned a 13B powered FC3S RX7 about ten years ago, so I am definitely a plan of the RX platform. About a week ago, I was given the opportunity to test drive the 2009 Mazda RX8 R3, the newest evolution of the RX8 platform.

The most obvious changes that the R3 version offers over the normal RX8s begin with the exterior. The R3 sport package includes a new, and aggressive front and rear bumper combo, which looks really good with the lower front lip spoiler. These body lines follow through to the sideskirts, and a rear wing has been added to the already nice looking RX8 rear end, as well as huge 19 inch forged wheels.

It's impossible to look at the R3 version of the Mazda RX8 without noticing its huge 19 inch forged aluminum wheels, and rubber band-like Bridgestone Potenza tires. These 40 series tires, combined with the large diameter forged wheels, give the RX8 R3 outstanding control and agility at high speeds. Not that I personally drove the car at these speeds, but let's just say that doing 95mph down the twisty sections of the 110 freeway between downtown Los Angeles and Pasadena isn't a problem with the RX8 R3. Equipped with a new sport tuned suspension setup which includes urethane foam-filled suspension crossmembers and Bilstein dampers, this R3 edition RX8 is surprisingly nimble, with outstanding steering response and agility when slicing through lanes or apexing corners at high speeds. Ahem. Or so I've been told.

Moving right along, check out those sidemarkers! The sidemarker light design of the RX8 R3 looks very modern and cool, and its triangular shape is reminiscent of the rotary shape that seems to resonate throughout Mazda's RX8 design.

One of the cooler features of the RX8 R3 cockpit is the addition of a "variable digital redline" display on the tachometer. Basically, the tach displays a much lower redline when the engine is cold. As the engine warms up to operating temperature, the redline automatically raises up to higher levels.

While the steering wheel and seats definitely let you know you're not in an ordinary street car, Mazda took some steps to retain driver comfort and luxury, such as the addition of a 300 watt Bose audio system with Centerpoint surround sound and AudioPilot noise compensation technology. I also loved the fact that the RX8 R3 had a Bluetooth hands-free phone system, which could wirelessly detect and connect both my iPhone and my Treo when they were inside the car. Bluetooth is a great feature when you're constantly on the phone, and don't want to get a "cellphone ticket" from pesky cops!

Without a doubt, my favorite feature of the RX8 R3's interior is the addition of these Recaro adjustable sport seats, with leather side bolsters. These seats upclass the standard RX8 interior immensely, from the snug side bolsters to the red stitched RECARO logo on the headrest. These seats transform the standard RX8 interior, making you feel as if you're driving a fully prepared race car on the street.

Many people don't realize how much of a difference having a good seat makes. These Recaros grip you and hold you snugly in place as you carve corners on your favorite stretch of road, or, in my case, as you slice through a slalom course. Having good seats like these allow you to drive the RX8 R3 much faster than a non-Recaro equipped RX8 because the Recaros prevent you from slipping and sliding as the car's weight transfers. What a huge difference; I can't even say it enough.

Even though you can't see it because of the plastic engine cover, underneath the hood lies a 232-horsepower twin rotor Renesis (which incidentally, stems from Rotary Engine Genesis) engine, matched up to a six-speed manual transmission. I absolutely loved the feel of the RX8 R3's six-speed manual – and this is coming from a person who is extremely picky when it comes to manual transmissions. The transmission felt solid, responsive, and slightly notchy, which is exactly how a sports car's transmission is supposed to feel. Brilliant.

When I actually tested the car out at an Evoschool Autocross Clinic, I found out that the RX8 R3 version handles much, much better than a normal RX8. Mazda has improved the structural rigidity of the car by adding some additional chassis braces, a trapezoidal strut tower brace, reinforcing the strut tower areas, and by filling the front suspension crossmembers with urethane foam, which is a chassis stiffening technique I've seen practiced by race teams in Japan. This leads to a stiffer, more nimble RX8… which translates to more driver fun when you pitch the car into a corner!

The RX8 R3 also seems to like running at higher speeds than other RX8s. After doing some research, I discovered that this is because the R3 package includes lower ratio gears in the differential. Standard RX8s come with 4.777:1 gears, whereas the R3 version remains comfortable at high speeds because of its 4.444:1 ratio. The lower gear ratio allows the RX8 to cruise the freeways at higher speeds, while maintaining a lower engine RPM.

The fact that the R3 has a six-speed manual transmission also helps with this. The first few transmission gears still have high ratios, so the R3 can accelerate off the line rather quickly, but the addition of the sixth gear, combined with the low differential ratio makes top speed cruising a breeze.

I had a great weekend with the 2009 RX8 R3. I discovered that it's not only an outstanding car to take to the race track, but it's also a fun, good looking car to drive around town daily, with a comfortable interior and great stereo system. No wonder the RX8 has won so many awards globally, including "Car of the Year" awards in the USA, UK, Australia, Singapore, and a ton of other countries. 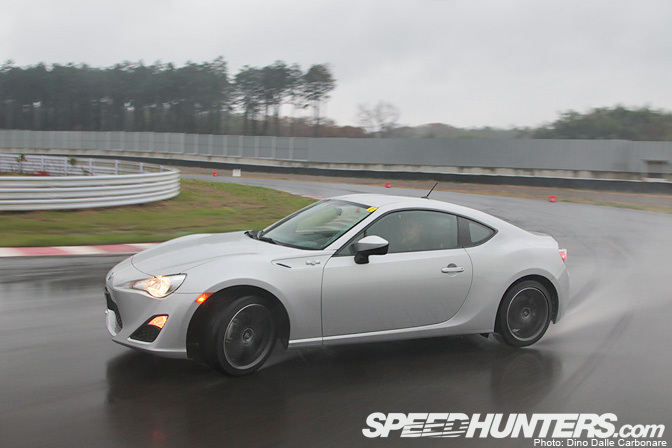 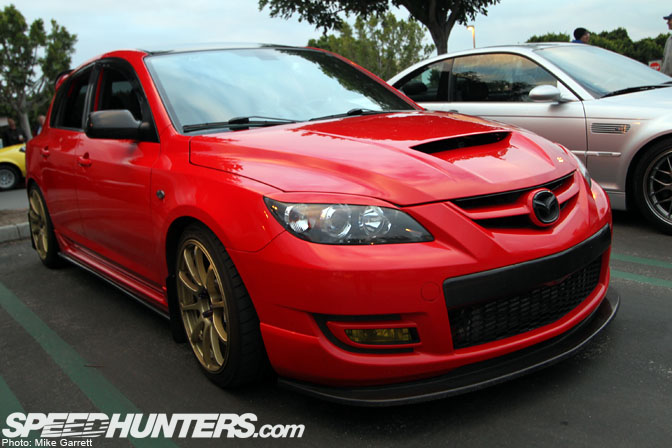 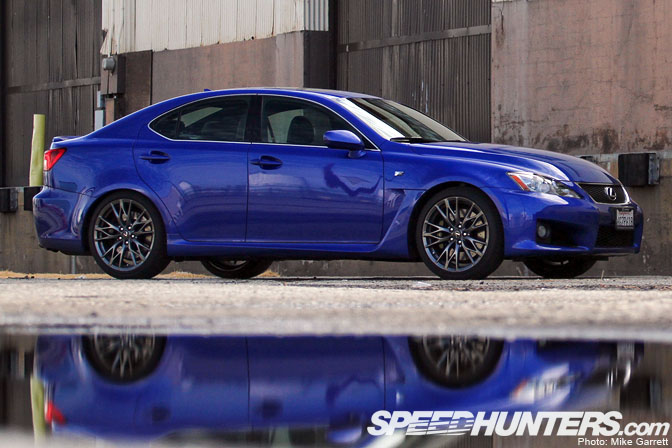 this great car and all, but 232hp? this thing needs about a hundred more and it would be the ultimate Z killer

seems like a nice upgrade to the existing rx-8.

however, no "rx" car will ever match up to the FC3S.

Looks are much improved over the older versions.

Is it just me or the Parking brake looks like a handle from a vacuum cleaner. lol

But anyway, I wonder about the car's handling on wet pavement.The orginal tires were good

on regular drive pavement but had some lost of traction. This RX-8 looks

a good small improvement of the older models.

Its a car of it's own respectable class.

Man! What a great car story. Makes me want an RX8.

anyone is australia grab the latest motor mag.

anyone not in australia, mazda aus has developed the RX8SP (bringing back the namesake from the legendary RX7SP) custom garrett turbo running 6psi pushing out 220kw (300bhp) at the rears.

its pretty much what the RX8 always should have been. with any luck it will go into production

nice u took a shoot of it at the village. Wish i was there to see it first hand

RX8's have been known for their very god handling abilities. i think mazda focused more on that dept. rather than developing higher horse power to the car. they do have this philosophy that evolution or say developement of new cars does not always mean that you need to change anything or something. they did up the HP a bit but im pretty sure they have a godd reason. maybe like they dont want to ruin the whole balance of the car. maybe (just maybe) they'll come up with a special edition with better HP and handling? hmmm.

still a great coverage though. and im loving the new cockpit/interior of this particular model. ^_^

I love that new front! But no photos of the rear? C'mon Antonio! ; )

The older rx8 has the longer diff.

I love the idea of the RX-8, but I really wish Mazda would throw some of us a bone and throw the Mazdaspeed 3's motor in there for a few thousand units. Call it a MX-8 for all I care. I don't think the weight penalty of the turbo four would be that much of a detriment especially if they tuned it to make somewhere between 280-300hp.

to me, the front end screams Audi

Yes, hopefully we will have a force feed one again, happened in the other generations, so hope they will with the lovly RX8, even if its superchargered (seems to be the trend with auto makers at the moment, with emission laws etc), it would give it its needed extra grunt/go/zoom factor!.

I love rotary vehicles, but I have to admit, the RX-8 was a let down with it's poor value for money. Especially when the Renesis was supposed to be a revolution for power and economy. Turns out the Renesis gets worse mileage than a 13B-T. Sadly, I like the body style, but would sooner put my S5 turbo engine in there and throw the new one out. There's a lot of 20 year old RX-7's driving around with 350+ whp....

Loks good, but shame about the Black Upper lip...

To anyone looking at the HP and blowing it off....go drive it. Make sure it's not an automatic. If you can, hit some corners.

Then tell me it's not a well-balanced car.