As you probably gathered from the teaser photo I posted the other day, I recently took a trip to the famous headquarters and factory of HKS, which is located near the base of Mt. Fuji in Shizuoka Prefecture. Japan’s clogged highways made for a long drive out to Shizuoka from Tsukuba, but It was more than worth it to experience the home of what’s probably Japan’s biggest tuning company. I’ll be posting more about my visit to the HQ itself later on, but right now I want talk about the the JZS161 Toyota Aristo drift car which was designed for HKS’s favorite racing driver, Nobuteru Taniguchi.

Of course this Aristo isn’t the only drift car in the HKS works fleet. For competition use, the pair of IS220 Altezzas are the weapons of choice, while the Aristo is used primarily for demo runs and exhibition drifting. You might remember that this same car appeared in the United States back in 2005 where NOB drifted alongside of Rhys Millen’s GTO on the Long Beach street course. Since then, the Aristo has been back in Japan where Taniguchi drives it regularly during events like the MSC Challenge and the HKS Premium Day.

What I like about this the car is the way it combines all the elements of a professional drift car while still retaining a bit of that “luxo street style”. Obviously Taniguchi isn’t going to be taking this car out for midnight trashing at the docks, but it still has the look of a proper big body luxury sedan while drifting.

When I was talking to Saitou-san from HKS about the Aristo, he laughed and said “well actually it’s a Lexus now!”. He’s right. A few months ago the car was redone with the new Lexus GS face conversion from NOB’s buddy Takahiro Ueno at Car Make T&E.

The rest of the car’s aero parts are also from Car Make T&E.The Aristo is used primarily as a VIP car, so you don’t see this Vertex kit all too often. That’s too bad because in my eye it’s one of the nicest looking aero kits out there for the JZS161. Like most of Japan’s big tuner cars, the graphics were done by MSR. The graphic design isn’t bad, but sometimes I wonder what this car would look like with something a bit more subtle…

The first time I saw the Vertex GS face conversion at Tokyo Auto Salon in 2008, I was amazed at how natural the newer front end looks on the “old” Aristo.I suppose it’s not too surprising since the two cars come from the same lineage.

The Vertex red and clear LED taillights add a stylish look to the rear of the car. I’d say these lenses are pretty much a “must-do” modification for any JZS161 owner.

Under the hood of the Aristo is a heavily worked version of the stock 2JZGTE inline six that comes in the JZS161. As you’d expect, the engine is packed full of HKS tuning parts.

Here’s a quick rundown of the engine mods-

With boost set at about 21psi, the final power figure for this car is an impressive 680ps.

The interior is spotless and functional – as you’d expect from a works drift car. The stripped and caged cockpit with just two bucket seats is big change from the plush confines of the stock Aristo.The only real left-over factory piece I could identify was the dashboard shell.

Everything is within easy reach of the driver, including the Vertex steering wheel, the shift lever for the HKS SR-type 5-speed sequential gearbox, and the well-used E-brake handle.

The Aristo’s digital gauge cluster with carbon surround is not only the most outstanding part of the cockpit, but a sign of just how much effort was put it into this build.

How often do you see parts of this level on a car that’s used primarily for demo runs?

Here’s a look at the back seat..or should I say, the spot where the back seat used to be. Like all the cars that were being stored in the HKS work shop, the Aristo was absolutely spotless inside and out. This car wasn’t even on my original list of planned features, so I know there was no special preparation for my visit…

Incredible braking isn’t usually something that’s needed on a drift car, but that didn’t stop HKS from outfitting the Aristo with a set of giant six-piston Project Mu brakes in the front and four-piston rear. Why? Because they can. They also look pretty cool sitting behind the chromed Advans.

The coilovers are also by HKS of course, Hipermax D prototype-spec to be exact.

All of the above + classic Taniguchi driving skill = scenes like this. Man, I’m a sucker for cool four-door drift cars…

The JZS161 also looks fantastic sitting in the HKS shop alongside other legendary tuning cars.

When I was looking at the Aristo, Saitou-san actually told me that HKS is planning on putting this this car for sale to make room for some new projects. Who wants to pay up?

I’ll be back with more features from my HKS trip very soon. 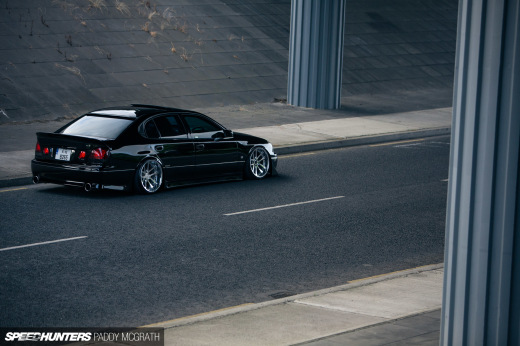 Trends Are Temporary, Style Is Permanent. 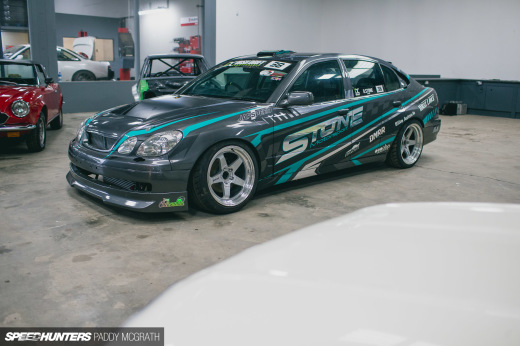 Did Someone Call A Taxi? 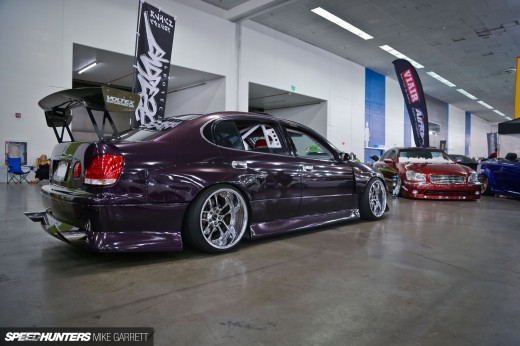 600-Plus Horses Of VIP Drift Style

Can`t wait for the HKS trip

the only thing i don't like are the door frame's, they should be black.

Amazing build on an amazing machine!

First to request wallpapers of the fifth and second to last images?

i agree with BH.

i remember seeeing this for the first time in the pits at LBGP a few years back...awesome.

This is the absolute and ultimate definition of quality tuning! I love HKS!

Many thanks for this bloody great feature MIke, and for the future HKS ones in advance! You've just made a bad day turn good for at least one guy out there. Please post every, and I mean EVERY single photo you took in the HKS headquarters!

Am I the only one sick and tired of the Advan RS?

+1 for wallpaper of the second to last image. I really like your shots of drift cars with the wheels at full counter.

i really really hope you got pictures of the hks 180sx.... info on it is rather limited so photos and info would make my day!

Yea Kill those graphics please! Oridos Arsto has better graphics on it. Awesome car non the less. Wish I could see it drifting!

+2 for wallpaper of the second last image!

Thanks for the cage and detail pics, Mike. The more the merrier.

I no Toyota month is over, but heres some pics for it,from just some from my collection, last page, page 9...

Last pic too should be included as wallpaper! Nice coverage Mike!

Let's continue right along with the SEMA coverage now. Given the massively diverse assortment of