Rod: To celebrate the first day of Toyota Month, I thought it would be a good idea to repost this story from last summer. It’s an interesting insight into Tsuchiya’s “other” career as a successful Sports and GT car racer at Le Mans…. enjoy…

Elvis Presley was known by his fans as “The King”, the nickname is also applied in stockcar racing to Richard Petty………so it is clear that you have to be more than a bit special to get this moniker applied to you in your particular field………..well, as most of you are already aware drifting has its own royalty.

Keiichi Tsuchiya, “Dori Kin” or “Drift King”, one of the most important figures in the sport of drifting, has made the film (The Fast and The Furious – OK just a cameo appearance), written the book (The Drift Bible – in reality a DvD) and probably has the T-Shirt (with my accuracy a pair of trousers)……you will all be familiar with his story……….or are you?

As well as his drifting exploits he was a top line sportscar driver who came very close to winning the world’s most famous race outright.

The event in question was the 1999 Le Mans 24 Hours when driving for Toyota.

Tsuchiya had driven in the French Classic race several times before….In 1994, Tsuchiya make his debut at Le Mans in the Honda NSX.
After a difficult race the NSX finished in 18th place overall, last car
classified.

In 1995 he took a class win with Honda after finishing 18th overall. He was back in 1996 with Team Kinimitsu NSX finishing 3rd in class and 16th overall. In 1997 he switched to the long-tailed McLaren F1 GTR of Team Lark McLaren but the car was retired after one of his team mates hit the wall at Terte Rouge.

However in 1998 and 1999 he was part of the factory Toyota squad that was aiming for outright victory. The team comprised of three cars with three drivers per car.

Through the Ford Chicane on Saturday Evening, June 1998. 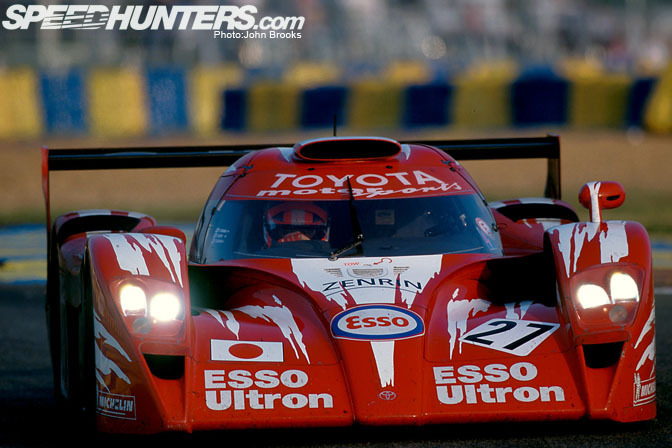 The GT One had several mechanical problems mainly involving
the transmisson, which also led to several spins. The car spent over
two hours in the pit but soldiered on to finish 9th overall.

Tsuchiya’s team mates were Toshio Suzuki and Ukyo Katayama in an all Japanese line up. 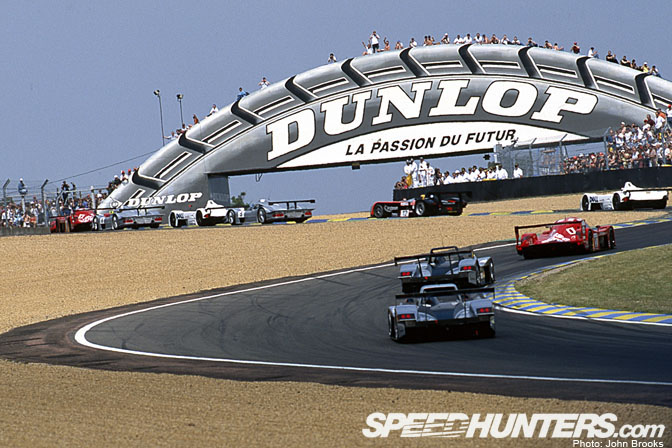 June 1999. A consevative start for the third Toyota approaching the Dunlop Bridge.

As the sun sets on Saturday evening the GT One powers through Indianapolis Corner.

It would appear that the trio were under team orders to maintain a conservative pace right from the start. As the race unwound this cautious approach began to pay dividends as one by one faster cars dropped out of the race (including the spectacular Mercedes back flip off the circuit) till it became a straight fight to the flag between the Toyota and the second BMW. In the last hours the victory was decided when the Toyota sustained a puncture while lapping another competitor and lost a lap.

Here the number 3 Toyota has a pit stop during the night. Image courtesy of Toyota Motorsports.

Hard on the brakes at night, the GT One’s carbon disks giving the photographers a target.

Sunday Morning and chasing the leader in 1999.

And then leaving the pits…..

On the way to second place overall with the Toyota GT-One.

A classic Le Mans view of the run from the Esses to Terte Rouge, now sadly lost to track “improvements”. 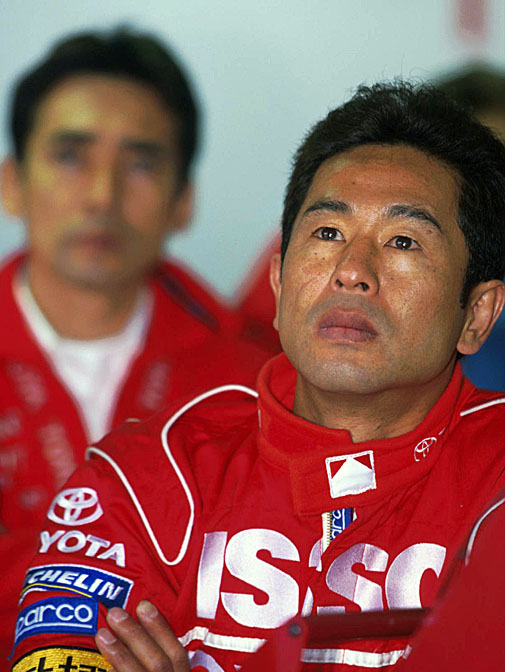 The Drift King keeps an eye on the timing screens.

The decisive moment. With around one hour to go and on the same lap
as the leading BMW, the GT One suffered a puncture. Of course it was at
the fastest point on the course as Ukyo Katayama set up the car for the
first part of Indianapolis, somehow he kept the Toyota on the black
stuff and crawled back to the pits.  Four minutes were lost sorting out
the ancilliary damage and so too was the race.

Second place was still a fine result but Toyota had Formula One in its sights so the sportscar programme was ended that season.

Tsuchiya returned to Le Mans for the final time the following year driving a Panoz to another finish.

2000, the crew poised, Tsuchiya brings the Panoz LMP01 into his pit.

Seven races and six finishes, a record to be proud of. 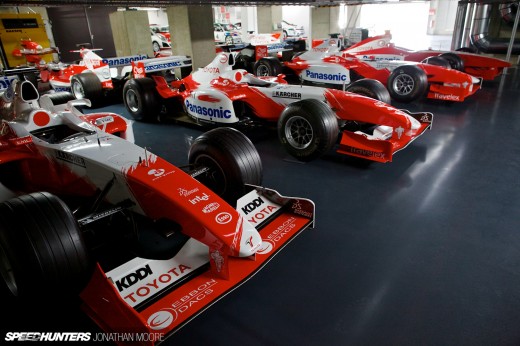 The Toyota GT One is definitely one of the more iconic race cars. Too bad they never returned after the second year. The Panoz prototype was a beautiful car as well. Definitely unique with its front engine layout.

wow awesome.. didnnt know tsuchiya raced outside of japan, always thought it was more local racing series.. this man has alot of history behind him.

That fifth last photo looks like an oil painting.

i never knew he raced for Panoz!

he's one of three favorite drivers i look up to!

thanks for the repost of the story

as a Toyota fan and a Tsuchiya as well THANKS for a peefect story ! Toyota month will be great !!!!! looking forward to it !

I knew that he raced the GT-One but I never knew he raced a Panoz!! Any more info about that please??