To follow up on the IS300/Altezza story that was published earlier today on Speedhunters, I thought I'd post up a new car story, featuring this newly revamped 2009 Lexus IS350, which is built up with F-Sport accessories. In case you haven't yet heard of F-Sport, it's the newly branded line of performance parts available from Lexus – basically the same concept as TRD parts for Toyotas, but for the Lexus brand.

As almost all our readers know, I'm a huge fan of, and owner of several Toyota/Lexus vehicles. I recently heard from a friend at Lexus that the corporate offices just received the kouki (late model) versions of the IS350s, which had minor exterior revisions from the early, or zenki model, so I asked him if I could stop by the office and see the newly re-done IS.

The subtle differences in Toyota's zenki and kouki (before and after minor change) models are often difficult to to spot unless you have both cars right next to each other, so I thought I'd just explain some of the new styling differences in the cars. New for 2009, Lexus revised the IS model's front bumper and front grill. While I like the overall sporty appearance of the front grill and bumper, I'm quite honestly a bit saddened by the fact that there isn't an available front lip spoiler at the moment, due to the bumper redesign. I sure hope someone makes a bumper lip kit pretty soon. Vertex lower lip kit, anyone?

Aside from the exterior changes, this F-Sport equipped IS350 also comes fully equipped with the F-Sport suspension, which consists of TRD/Bilstein shocks, F-Sport lowering springs, F-Sport rear chassis brace, larger diameter F-Sport sway bars and polyurethane bushings. Nice! These suspension improvements will surely make a difference in the high and low speed handling of the F-Sport equipped IS models, as if the IS350 didn't handle well enough already! This is great news!

Wheels are important for the looks and performance of any car. This new F-Sport equipped IS350 features new lightweight forged alloy wheels with a staggered fitment – specifically, 19x8J up front with 225/35/R19 tires. The matching back wheels are actually 19x9J; I think it would look awesome to have 19x9J wheels all the way around the car. That would look awesome, due to the inceased fat lip of the wheels, from front to back. Aggressive.

Even when randomly glancing at the car, it's impossible not to notice the F-Sport brake upgrade, which consists of 6-piston calipers and cross drilled 355mm rotors, which are mounted on very nice looking black anodized aluminum hubs. Stainless steel braided brake lines also replace the factory rubber lines for added stopping performance – no danger of the brake lines expanding and bulging when the brake fluid gets hot from use on the racetrack or your favorite winding road.

New for 2009 models, Lexus has this slick looking turn signal incorporated into the side mirrors. I think these mirrors will be an extremely cool upgrade for owners of first generation IS250s and IS350s.

Inside the car, D-mode paddle shifting functions behind the steering wheel have been added to the normal IS350s, as well as contrast stitching on the door panels, leather covered center console/armrest lid and seats. Very nice way to step up the styling of the car, Lexus! As if it weren't classy enough. IS350 owners with high attention to detail may notice that the center panel instrument cluster is different as well.

While I prefer driving the 6-speed manual transmission version of the IS, I must admit, the automatic version is pretty fun to drive as well, especially with the paddle shifters. Nice looking shift knob and center console too.

If you look closely, you can notice the double contrast stitching on the leather seats and center console armrests. It's details like this that make me like Lexus a whole lot.

Even though the particular IS350 F-Sport in the photos doesn't have it installed, Lexus makes an additional optional F-Sport carbon fiber engine cover for the IS350. Although, to be extremely honest, I don't see the point in paying big money for a carbon fiber piece that just covers your engine. It doesn't make the IS350 perform better, but I'm sure some people out there will buy it just because.

What I think does matter for performance, however, is the addition of the slick looking F-Sport intake system, which has a high flow air filter, and nicely badged piping system, as we can see here in the photo. Whoever designed that metal F badge did a hell of a good job. And I never like anyone's logos! Good job as usual, Lexus.

For the 2009 model year, the rear bumper of the IS350 has been revised, as well as the taillights.

From here, you can see the flat lip on the 19x9J rear wheels, which have 255/35/R19s mounted to them. Like I mentioned before, I think I'd like to see these 19x9s all the way around, with 225s mounted to them. That would look awesome, especially if the car was lowered a couple more inchers, and used spacers to improve the offset. You could do that, too… because these F-Sport accessories are just accessories, there's nothing stopping you from ordering rear F-Sport wheels only, especially if you're ordering the wheels from an easy-to-deal-with Toyota parts counter guy like Herb at Cabe Toyota in Long Beach, or Jay at Glendora Toyota.

The exhaust uses polished stainless steel pipes and mufflers, and looks pretty nice with the exhaust tip style subtly placed under the bumper. Don't worry about getting pulled over by the local five-oh though… this exhaust system is certified street legal, and doesn't affect emissions compliance, and isn't too loud either – it is under the 95 decibel legal limit. So take that, officer. Go harrass someone else.

All in all, the F-Sport equipped Lexus IS250 and IS350 are really well done in my opinion. The big brakes and suspension modifications drastically improve the high speed and low speed cornering characteristics of the car, while retaining the smooth and luxurious Lexus ride quality. Even though installing an aftermarket intake system and exhaust are very simple mods, the beauty of the F-Sport packaged IS250 and IS350 is that the car comes with better-than-stock looking wheels, amazing big brakes, engine performance bolt-ons, and a good all-around suspension setup… and everything can be financed from the dealer as part of your monthly payment plan.

Good job, Lexus. I honestly think that the IS series cars are great for daily driving, and even more so if they are F-Sport equipped! Now the only difficult question is… which one to choose? IS250 F-Sport, IS350 F-Sport, or the monstrous ISF? Either one is pretty effin sporty. 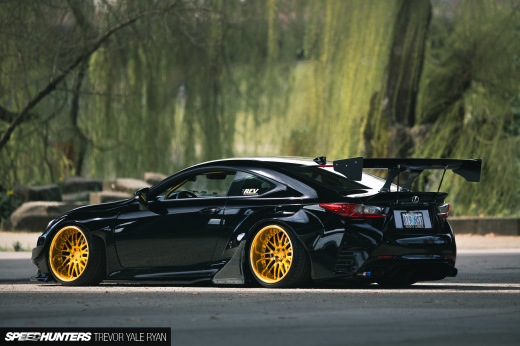 It sucks that the only lexus you can get with a manual tranny is the IS250 RWD. The IS250 AWD or IS350 with a 6-speed would be sick

thanks for finally explaining zenki and kouki for me. i have been reading SH for about 6months and always wondered what the hell it meant. so cheers!

BTW the whole SH team are doing an awesome job! loving the site, and dont forget about us aussies down here. we have some fantastic cars floating aroudn for you guys to spotlight/feature!

"So take that, officer. Go harrass someone else."

down here in norecal, its the stupid ricers and there annoying sounding exhaust tips that blow it for us.

so please, take that ebay exhaust pipe of your 91 GEO.

Ya know, Im looking at this, and thinking "wow, this would look amazing if it were a wagon" what do you guys think? Or have I been looking at the evo IX wagon for to long? O, and I agree with you Antonio about the lip kit, the front end just doesn't look as agressive as it could.

I LOVE my 1991 Geo and resent that comment. I'm a slide drifter. Yarble.

Ben: Thanks err, CHEERS for the support mate! Now if only I could find me some Aussie AE86 friends that would let me hang out with them on a trip to Australia, maybe I could find a way to visit and see everyone's cars!

Joe: hmmmm, IS350 Wagon WOULD look pretty interesting/cool. As long as it didn't look like a Matrix. Evo 9 wagons look cool. Remember the previous generation IS300 was available in wagon version, called the IS300 Sportcross in the USA, or Altezza Gita in Japan.

Walter H: hey trivia question for ya! Do you know which GEOs came with Toyota 4AG engines?

But the wheel fitment looks DAMN good for stock so, i guess the beast redeems itself...

My thoughts... for the price go BMW... sorry but given the chance to drive the ISF on the track, I went away with a few thoughts.

2.The seats are amazing, as well as the leather

3.The best Automatic Manual mode (true 100% locking torque converter)I have ever seen almost as good as a DSG, infact really hard to tell the difference.

It just understeers really badly and when I was on the autocross circuit the traction control almost put me into a wall... Once the car enters an understeer the traction control will not let you recover, I was able to do it again and prove it and as far as I know it has not been updated. I did everything right to recover from my training (and the instructor riding shotgun agreed esp when I got the car to do the same thing again, and then the instructors recreated it) and the front wheel remained locked... I can understand why the car is set up like this, as it is safer for the average driver, but people that buy ISF's or M cars and then push them generally have the correct reaction to recover from extreme brake off understeer, apply the brakes slowly and straighten out the wheels, this transfers more weight to the front and allows more grip for cornering... Instead the car remained locked up till I came to a stop, the first time a few feet from the wall.

I will admit the sound of the engine at WOT is an amazing thing that everyone should experience once in life (seriously like Ferrari nice), but for my money 335/M3 is the winner, bigger more composed and more of a drivers car. Oh and you can get a manual