A question to you all. If you were going to run in the Nurburgring 24 Hours, held on a combination of the current Grand Prix track and the legendary Nordschleife what car would you pick?

Porsche? BMW? Lexus? Even if you picked latter brand, the model that you definitely would not go for would be RX 400h SUV but back in 2005 that is exactly what happened. This Lexus became the first hybrid car to finish a major 24 Hour race.

The Nurburgring 24 Hours is one of those events that you pretty much race anything but Hybrid SUVs are pushing the envelope a bit. Still, crewed by Marc Duez, Kanami Takeda, Yasushi Kikuchi and Hitosho Gotoh, the big beast not only raced but finished back in 2005.  The car was run by NPO MOTO-CP, who had previously raced Prius hybrids in Japan. The car ran in the S1 Alternative Fuels class mainly against diesels. There was full factory support for the effort which was headed up by Hiorkazu Koga, Genreal Manager of the Lexus Vehical Performance Development Division.

Duez, a four time outright winner of the German endurance classic, qualified the car in 195th place, completing the 15.7 mile circuit in 11 minutes 42.812 seconds. Yes, that is 195th!

The race was originally inspired by 24 Hours of Le Mans and Spa and was first held in 1970. Up to 220 cars are allowed to start, most with 4 or 5 drivers. It is very important to the domestic car industry and usually there are werks or semi-werks entries from the likes of Porsche, BMW and this year (2009) Audi. A huge crowd attends, in excess of 200,000 and the whole scene is more like a beer festival than a motor race, there are well lubricated Germans everywhere. It is as crazy as motorsport gets.

The Nordschleife has become a centre for tuning and sporting development for all the world's major performance brands. There are workshops and factories all round the small village of Nurburg, whose old castle stands above the track. So it is not unusal to see all kinds of cars testing around the track, racing is a different matter. Koga explained the rationale about the project. "Interest in diesel vehicles is high in Europe and it is thought that the performance of hybrid vehicles is not so good. We wanted to assess the Lexus RX 400h's endurance and show the compatibility between driving performance and fuel efficiency by competing in the Nurburgring race." 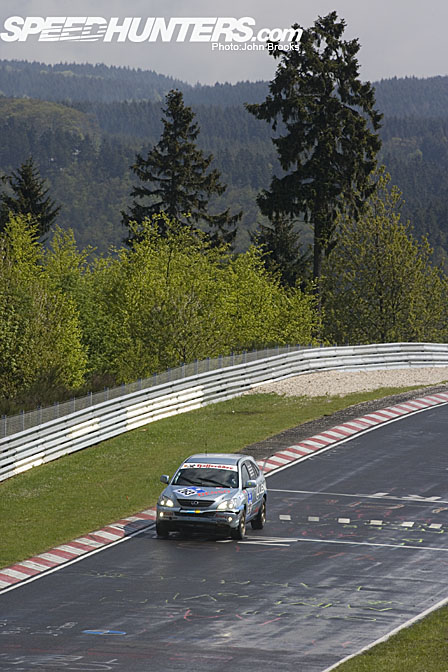 I have to admit that the first time the SUV popped into my viewfinder I had a mental wtf? I spoke with Marc later and he reckoned that the car was not too bad, considering it weighed in at 1300 kilos and not designed for this cruel and unusual punishment. 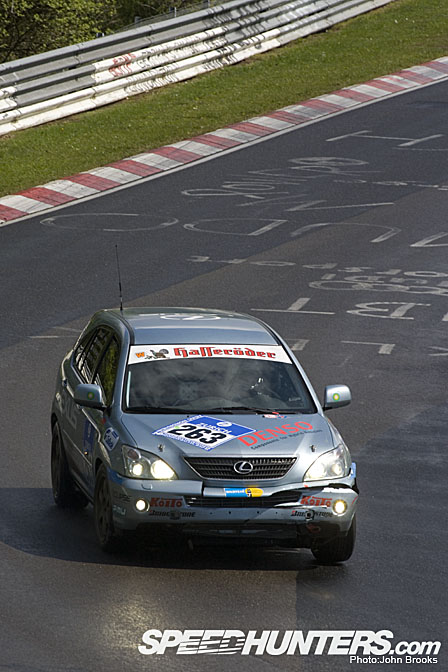 The secret of success in 24 Hour races is to stay on the black stuff, away from your competitors and out of the pits. The hybrid did just this and was running a comfortable 3rd in class until around quarter distance. Then an accident with another car caused rear end damage. As a result of this the power steering failed, not what you want with a car of the size and weight. And of course being the Eifel Mountains it rained and rained and rained. Did I mention it rained?

Despite this severe handicap the team soldiered on and eventually the clock ticked past two and the race was run, The result? 79th overall and 13th in class which made everyone concerned very happy.

Dude, sick TE37's. Too bad it wasn't dropped though. Now they should have put this drivetrain in something "cooler" but still a nice accomplishment.

Definitely a gimmick. Having driven the 400h, it's actually a surprisingly nimble SUV... right up there with the X6. However, I bet the electric motor wasn't helping too much during the race...

its things like this that make want to take a Peel P50 to a race....

I love seeing cars that have racing at the bottom of the priority list, on a race track...must be the rebel in me (hahahah) but I think it's awesome! I also think spell check is awesome too!