Unless your name is Jason Plato, then the 2008 British Touring Car Championship was a classic year, with tight competition between works and independent cars. Vauxhall, SEAT, BMW and Honda were all on the top step of the podium.

It really was meant to be SEAT's year. SEAT had been in the British Touring Car Championship for the last few years and 2008 was the year that they were expected to win the title.

Armed with the new SEAT Leon TDi, the team expected to dominate, pre-season, just as the Diesel had in the world series. However, late delivery of the cars from SEAT in Spain seriously compromised testing and development. Reliability issues killed any hope of a SEAT championship and at the end of the year, SEAT announced they were leaving the British series.

The front part of the grid for Race three is decided by a spinning wheel! The winner of Race two spins a wheel, to determine at which point the grid is reversed. Remaining positions are decided by race two finishing order.

Sounds complicated, but it works very well and does spice things up. We had 10 different winners this year so it does work.

There are two classes of car in the championship. The FiA 'S2000' Class make up the front of the pack and are the same car regulations in the World Touring Car Championship. The remaining class, 'BTC' are older cars, such as the Honda Integra, which followed the British Touring Car regs introduced in 2001.

So, onto the racing…

The season was very much about SEAT and Jason Plato trying to play catch-up. Reigning champion, Fabrizio Giovanardi won less races than Jason, but consistent points finishes sealed the championship with two rounds to go. 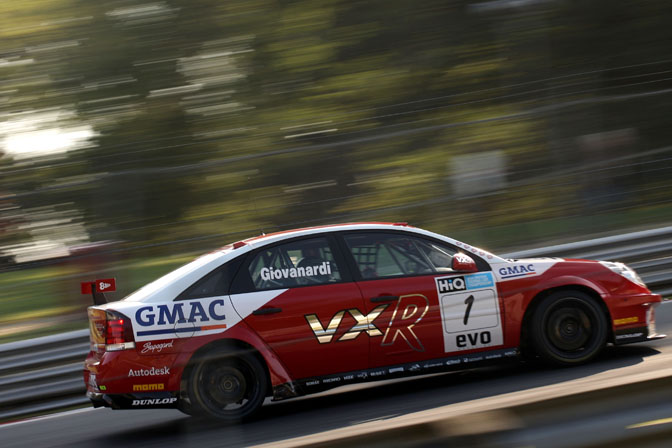 Even more impressive given the 'barge' like proportions of the Vectra!

Giovanardi's other competition was from Matt Jackson in the family run 'BMW Dealer Team UK'…although they did receive some help from Andy Priaulx's WTCC team.

Jackson had previously shown promise the previous year, but he really came of age in 2008, winning four races during the season and snatching second in the championship from Plato in the works SEAT team. Quite an achievement

Jackson started the year off in Pole position at Brands Hatch, but Giovanardi was to dominate taking the first two wins before BMW driver, Colin Turkington won the final race of the day.

The second race weekend at the Rockingham Speedway saw Team Dynamics, Gordon Shedden, dominate with Pole and the first win of the day. Team Dynamics had a tough season with Shedden and Tom Chilton piloting the Orange Civics, but there were flashes of success.

Jackson won race two, but it was Matt Neal who took his first win as a Vectra driver at the end of the day, having left his families team, Team Dynamics at the end of 2007.

Star of the day was Adam Jones in the privateer SEAT Leon who finished 4th. Like Jackson, Jones is a star of the future and was unlucky not to secure the Independent crown. 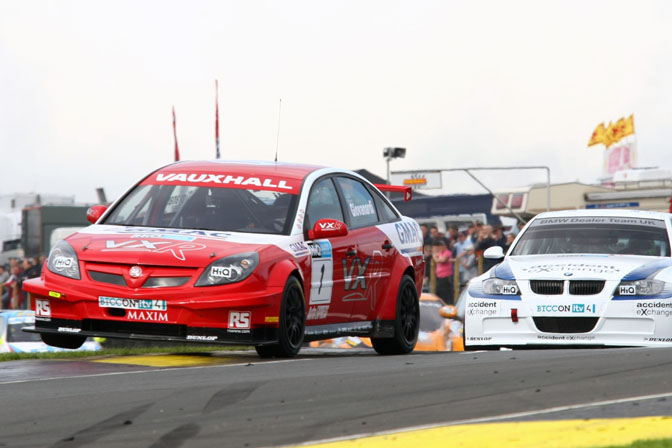 The home (if all goes to plan) of the 2010 British Grand Prix, Donington Park, played host to race weekend three of the 2008 season.

Another weekend, another pole sitter, this time Tom Onslow-Cole in the Vauxhall Vectra. However, it was Jason Plato who took the first ever Turbo Diesel win in the BTCC in race one. Giovanardi would add to his points tally in race two, before, Darren Turner celebrated SEAT's second win of the weekend.

Donington would also see 'BTC Racing' drop their troublesome Lexus IS200's for SEAT Toledos. It was a shame as it reduced the manufacture count by one.

BTC Racing  continued to struggle throughout the year, but the Toledo was a small improvement 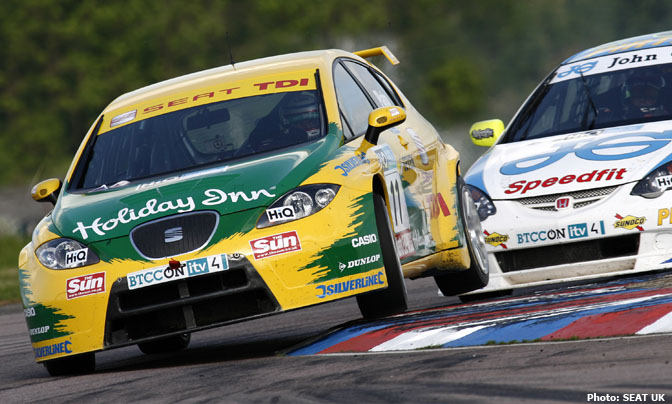 Next stop was at the ultra-fast Thruxton circuit in Hampshire in the
middle of May. Tom Onslow-Cole grabbed another Pole and the first two
races, his best performance of the year, before Jason Plato took the
final win of the day.

It didnt all go Plato's way as he was disqualified from race 1 following a ride-height check, robbing the TV presenter of valuable points.

Gordon Shedden was also disappointed with two punctures on this tyre killing track while leading race one and two.

Meanwhile new-boy Andrew Jordan retired, when his engine cut out, after challenging for the lead in Race 3. Andrew was a star this year in the Honda Integra. 'Son' joined BTCC veteran, 'Dad', aka Mike Jordan in the John Guest Eurotech team.

Look out for Andrew in 2009, he will be driving a Eurotech Vauxhall Vectra, race wins are only a matter of time.

More frustrations for SEAT at the next round, when BTCC's 'Mr Unlucky', Darren Turner, spins off the wet race track at Croft, after leading from Pole. Team mate Jason Plato didn't fair much better, also spinning off…only this was on the warm-up lap!

Colin Turkington takes two race wins in his WSR BMW 320Si before Gio once again takes the final race of the day, strengthening his lead. It was a great season for Turkington, who took the Independents Title, finishing fourth overall

A long break before the BTCC circus moved to cold Snetterton. SEAT locked out the front row in qualifying and it appeared that SEAT had finally found a good turn of speed. Plato stating his championship starts here….Ahhh.

Still, Plato did win race one and two, so all appeared good at this point.

Title contender, Matt Jackson, didn't have a good start, crashing in qualifying, but he was out for race-day and won the final race of the day.

Fellow BMW driver, Stephen Kane finished second in his Motorbase car, a great result for Stephen and the team. Motorbase would improve during the season. Kane is seen above, being led by team-mate Rob Collard

As we entered the later stages of the season, Plato grabs another Pole at Oulton Park in Cheshire and takes the first win. He's looking good for race two, but yet again, his car lets him down and Colin Turkington takes another win. The SEAT now has the speed, taking pole 10 times during the season, but it doesn't seem to be able to complete all three races. 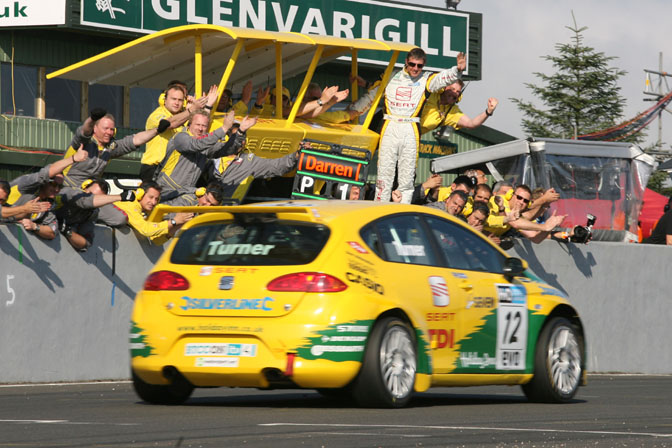 Rounds 22,23 and 24 at the Knockhill circuit in Scotland were all about SEAT.  GT1 Le Mans winner, Darren Turner took Pole and then went on to win the final race of the day, much to the delight of the SEAT team, including Jason Plato who had…yes, you guess it, had retired earlier.

Jason won race one and two, after Turner was pushed off in race one.

The penultimate weekend of the championship sees a wet Silverstone. Yet again SEAT grab pole with Jason and win race one in dominating form.

However, SEAT can't continue that momentum and Giovanardi takes race number two. His first win in 11 rounds! Matt Jackson takes the final race, moving him very close to Jason in the championship standings.

Special mention has to go to 18 year old Michael Doyle in his old Honda Civic 'EP3'. Despite his minuscule budget and a family run team, Doyle nets 8th place, beating Tom Chilton in the more modern Civic in the process. This was the latest in Doyle's excellent mid-field performances. This 'BTC' class Civic dates back to 2001

Before we knew it, it was the final race weekend of the season at Brands Hatch. Single-seater convert, RAC driver, Stephen Jelley had a trying season, but finished on a high with a surprising Pole position, one of just two poles for BMW. He doesn't finish in race one, but BMW finish in the top four places, with Matt Jackson taking another win.

Despite finishing in a lowly 14th position, Giovanardi secured his second BTCC championship after Jason Plato can only manage 5th place.  Jackson goes on to win race two, leading from pole, and overtaking Plato in the championship for runnings up spot.

Meanwhile the new champion didn't even make the start after his engine refused to start! Flooded with champagne perhaps?

What ever the reason it was the Italian's only non finish all years. That is 30 rounds of hard aggressive racing!!! A richly deserved title for the Italian and for Vauxhall.

The final race of the season saw Tom Chilton finally take his first win in three seasons. Chilton had struggled this season in the Team Dynamics Civic and should be better suited next year, when he returns to his old team, Arena International Motorsport.

John George had a massive accident in his Integra. He was very lucky to escape from this uninjured.

In the end it was what could have been for SEAT. It was their championship to lose.

The 2009 season starts in April. SEAT may have gone, but Ford are back, thanks to an Independent entry by Arena International with Tom Chilton. Keep checking Speedhunters for more news on this in the new year as I am involved in this project.

I will also be looking back at the 'Golden Era' of the British Touring Car Championship later in the week.

I'll leave you with Giovanardi being presented with an Andrew Kitson original at the Awards ceremony.

The racing has been great this year and the TV Coverage live all-day including support races was good too.

I hope Plato gets a drive. I read he may end up at WSR

Yes, last I heard, he had been over to WSR to have a cup of tea(!), so he may end up there. There were some rumours a while back that Volvo may enter the C30 that ran in the STCC and WTCC with Plato,,,but havent heard anything on that for a while now

I didn't really see any of this as the TV coverage was relegated to the somewhat obscure ITV4.

Salvation:-Live coverage ( 3-5hrs) was on ITV4, which is available on Cable/Satellite and Freeview, so its not really obscure. In addition 1hr highlights of every round was broadcast on ITV1 on the Monday evening, after the race. This highlight programme was then repeated on Men and Motors and ITV4.

I remember reading that ITV showed over 70 hours of BTCC action this year. Now if only the likes of Fox, ABC, CBS would do that here in North America.

some really good racing this year. Hard to find anything else as competitive.

Much better than DTM or WTCC

I hope that it will still be good next year now that Seat have departed....and, Mr Unlucky LOL! Turner had no luck at Seat

I remember at one of the early rounds, Ben Edwards pronounced the Vectra as looking unlike a touring car, which forced me into a bit of an old man scoff and huff. "Touring Cars" generally have been and in my opinion should be, four door sedans. Not hatches and coupes and all that carry on. Except for the Group A R32, which can be anything it wants... Bring on the Golden Stuff!

what about a wagon!?!

maybe because the Vectra appears large and ungainly, compared to the likes of BMW et al??

So glad to see some more grip racing coverage on Speedhunters lately.

You and John Brooks are my heroes! lol

I was watching a 1995 BTCC reveiw last week, so forgetting the wagon was a bit daft. And the Sierra/M3 era was a two/three door fest, so I respectfully withdraw my rant.