I'm sure most of you remember the wave of Porsche stories that filled up Speedhunters over the course of September…. a few of you thought we had gone a bit bonkers with Stuttgart fever!… There might be some truth to this… some of us Speedhunters on the site are real Porsche fans so we certainly indulged ourselves.

Looking back at Porsche month, there were a few stories that we were working on, which unfortunately didn't get closed out. One of them was our link up with the famous Porsche racing engineer and semi-retired motorsports boss, Norbert Singer. We were working on an article with him but it missed the end of Porsche month. I've been sitting on this material ever since and feel that now is as a good a time as ever to release this gallery of photos from the Porsche Archive, complete with Herr Singer's own commentaries.

Norbert Singer: The 917 was in 1970/71 the dominant car. The development was not easy and it took same time to get the aerodynamics working, but then it was the car to beat.

Norbert Singer: None of the people which are in the picture were involved in the development of the car. It was a test run for some historic tests. The tyres were the widest we ever used on a race car in a race, the rim- width was 19” on the rear. In test we had once a 22” tyre which was made from 2 front rims welded together.

Norbert Singer: This was the first attempt to make a smaller Turbo (2.1 ltr instead of 5 ltr in the 917) and make it reliable for 24 h race at Le Mans with the long straights. This enginewas the first Porsche Turbo with an intercooler. At Le Mans it was second overall behind a Matra prototype. The aerodynamic development was very interesting because this car had a strange weight distribution, therefore you had to adapt the aero work. Because of the weight distribution the car got very wide rear tyres and a central fuel tank to keep the weight distribution as constant as possible.

Norbert Singer: You can see the rear fenders with were enlarged for the 19” Dunlop tyres, an idea of my friend the Dunlop engineer Dieter Glotzbach the 19” were diameter. The driver on the picture is Manfred Schurti. In the back ground you see also the 934 in an early stage. This car was homologated in Group 4.

Norbert Singer: It was very useful to have a circuit and a skid pad at the race shop. It is not very long and nearly all corners were right hand corners and not so fast, but for testing and specially in the past the rough bump test was a big help to make race cars and road cars reliable. For extended tyre tests for instance we went on other circuits.

Norbert Singer: This was my most interesting race, we had a small crash on Saturday evening and we fell back I think 22 laps and on Sunday morning we were position 2 with 5 laps back to the leader, than we had again a crash and the car could not come back to the pits, it lost both wheels on the right side as the picture shows. In both cases Jochem Mass was driving.

Norbert Singer: This car was prepared for a bicycle record inWolfburg highspeed track. Unfortunately the tyre from the rear wheel came off at a speed about 100 km/h. The driver managed to stop the bicycle unhurt. The cab on the 935 was saved for another test but it never happened.

Norbert Singer: The first not so successful race from that car was Norisring. It was developed in a very short time and was the first 1.4 ltr Turbo engine. The car was not ready developed, some weeks later after more work on the car it was a winner.

Norbert Singer: The 935/78 called Moby because the car was so wide and low and white. This shows also an early stage of development. The door intakes NACA shaped and the low wing. Regulation in these days say that the wing must not be seen from the front, actual it was the width of the windscreen and when you make it very low it can be as wide as the car, but the higher wing later with a smaller width was more efficient. The NACA doors were allowed from FIA at the beginning when we introduced the car than it was not allowed by FIA sub technical people, later again allowed by the FIA president, but we kept and raced the other doors.

Norbert Singer: Norisring was and is still a highlight in the German race calendar, lots of spectators, good atmosphere and very hot.With the Moby we had a brake problem because the balance bar between the front and rear master cylinder flipped and Jacky Ickx had only brakes at the front. On such a brake intensive circuit we had no chance.We did not finish the race.

Norbert Singer: …a year after the 935 was won the race with a K3. Le Mans was not a good circuit for these cars the long straights hurt the engines and the fuel consumption was very high and not really competitive against the sports cars like 936.

Norbert Singer: 936/81, a more developed car for Le Mans, it had a 2.65 ltr Turbo engine instead of the 2.1 ltr and a stronger gearbox to cure all the problems from the past and at the end it was successful. The engine was a very good basis later for the 956.

Norbert Singer: 956 start of the race, it was a milestone in the Porsche racing history, with that superb win the carrier of the car starts and at the end we built more than 140 cars.

Norbert Singer: Joest copy of the 935/78, this car ran mostly in the US so far I know. It got the original door covers, therefore it looks better.

Norbert Singer: At Le Mans in the old days we had the signaling pit at Mulsanne and we had a conection via internal telephone from the pits. All messages to the cars had to be given at Mulsanne signal boards. Normal race car radios in these days were not working over the 6 km distance to the pits. Later with an extra amplifier it worked, even today you need this equipment.

Norbert Singer: This car war the first 911 based car with carbon chassis. It was a superb win at Le Mans in 1998. To be homologated we had to do also a road car and we got a full type approval for it which normally cars with high production numbers get, was a very good experience.

Norbert Singer: The Le Mans win was a typical one, we stayed always with the leaders and when they run in problems we took over the lead to the finish, despite having also some problems. The cars aerodynamics were a compromise between high speed like Le Mans and downforce for slower circuits. We could not win a FIA GT race but we won the most important race at Le Mans for the 50 year anniversary of the company. 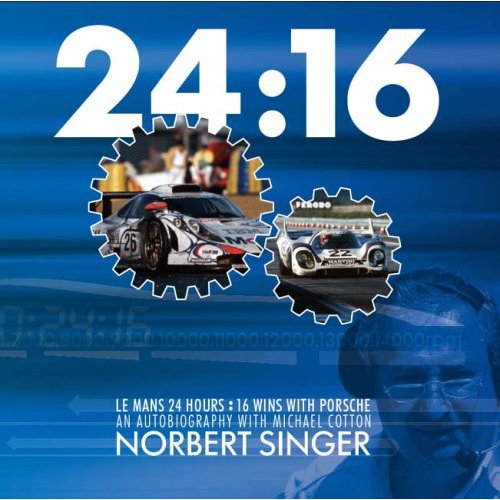 BTW if you are interested to read more about Norbert's racing exploits at Porsche, have a look at his book 24:16. It gives a play by play account of each of the 16 Le Mans Victories he was involved with at Porsche. A fantastic read.

Thanks to Porsche for arranging our meeting with Norbert Singer and letting us use photos from their archive!

One Of 77: The Porsche 935 Returns To Motorsport

Thanks for the medecine ROD

Very rare and very cool pictures here , unfortunatly i don't visit often as i want , but each tour full my batteries at max level.

Ho , btw , never heard about Chevrolet Monza Dekon....? A pictural history with your standard quality could be really fine , and i'm sure to share interrest for such a Dinosaur with many people here..:D)))