BREAKING NEWS, as I was about to publish the post button I see
that there are stories running around the 'Net to the effect that
Travis Pastrana has suffered an accident which will put him out of the
competition……….his replacement in Team USA is confirmed to to be Tanner
Foust, two time Formula Drift Champion and all round good
guy………..someone for the SpeedHunters crew to cheer on.

(I confirmed this with Tanner's manager just now -Rod)

Final preparations are underway, the track is now complete and some of the stars had their first look at the arena yesterday.

Olympic cycling hero, Chris Hoy had a run on his bike, no doubt trying to work out how he is going to beat Lewis Hamilton and the Mercedes Benz.

Latest driver to be signed up for Sunday's event is BTCC star Jason Plato, Here he puts the KTM X-Bow throught its paces.

There were several comments posted after my preview wondering how you could follow this weekend's happening, well news reaches me that my old friends John Hindhaugh and Bruce Jones will be providing commentary for an exciting new development.

In association with Freecaster.TV – Radio Show Limited and RadioLeMans.com are delighted to be able to bring you live coverage of the Race of Champions.

For the first time the organisers have sanctioned a live video stream from Wembley Stadium so that an even bigger audience than ever can enjoy the star-studded event.

Make a date for Sunday 14th December for six hours of live action in sound and vision. The coverage will be anchored by Radio Le Mans regulars, Bruce Jones and John Hindhaugh but expect studio guests from all forms of motorsport.

MORE BREAKING NEWS….With Mark Webber injured a few weeks a go it has been decided to drop Team Australia from the Nations Cup. Instead a Race of Champions All-Star team will still feature Troy Bayliss and he will run with British F3 champion Jaime Alguersuari. 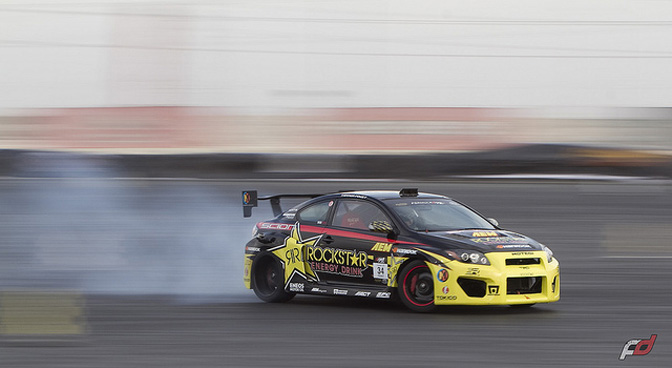 out of all the racing series in the US... and Tanner Foust is the selection?? the only thing that comes to mind is why...?

Yea I know he is good and all but hes too much of a pretty-boy media face than hardcore driver they should have gotten someone else like Millen or something, at least he has certified skills outside of D1 i.e. Pike's Peak Hill champion 2 times I think.

Foust is also a two-time X Games Rally champion and he's come close in the Rally America championship a couple times as well. Guy's got skills off pavement as well. The head-to-head format of the X Games is probably closest to what the ROC will bring, which means he has plenty of experience.

Not to mention he seems to be one of the popular time attack dummies as well. He has driven a lot of cars fast over the years, it will be interesting to see him compete

Also, there's NO EFFING WAY that Olympic cycling Chris Hoy guy can beat Lewis Hamilton!!! He should try using a CAR instead of that bike. What a dummy.

the reason rhys millen wasnt chosen is because he is from new zealand, so he would be on team nz not team usa

Pre-running the course on a bicycle can be very beneficial as you notice surface conditions that would be missed in a car. Not that it would help a cyclist beat a bunch of professional race car drivers.

My guess is that Tanner was the next in line due to the X-Games connection. The event is about TV hype and a personality like Pastrana/Foust is a better story than some driver that won ALMS/Grand AM/Speed WC that nobody knows.

I just hope that Tanner places well so all the 'drifting is dead' and 'a drifter has never placed well in a non drift event' idiots will STFU.

Will Rhys and Sam be there so they can play slap and tickle?

Nice, not a single word about Pastrana and Webber's conditions. I dig the sportsmanship.

What, no Top Gear reprisentitive? They've got 5th gear and TP US, but I really wanna see The Stig go up against some of these guys

This is awesome for him and I am very happy for him he is probably the most diverse driver in the USA for sure. I was with Tanner today at PRI just before he left. my last words to him as he walked away were "Checker or Wrecker we are rooting for you buddy!!!!" he turned around with a grin and a thumbs up.

Tannfer Foust seems to be everywhere these days.

@Antonio sorry to admit this but the "rage" shot belongs to LAT, the official photogs..........they are the only one with floor level access........so I don't hold much hope of getting anything similar but will try my best. It is around zero here so shooting an open air stadium will be fun. As to Hamilton/Hoy well don't be too sure, the speed of the cyclists at the Olympics was impressive....and Lewis is driving some Merc not your old Corolla

Foust is OVER RATED if you ask me!

I don't know about that, I don't think is the absolute best, but he's very skilled and extremely consistent. As far as Hoy on the bike I think its a publicity thing more than anything

Me, being a cyclist myself, I would love to see a pedometer reading on Chris Hoy's bike on how fast he enters and exits the corner.

This events looks promising. I can't wait to see more!