I don't think there is race series that Manabu "Max" Orido hasn't tried his hand at. The latest addition to his resume is driving a factory-backed Chevrolet Lacetti in the FIA World Touring Car Championship. In stock form the Daewoo-based Lacetti is not high on the the "desired" cars list and in fact it is currently used by Top Gear is the "reasonably" priced car which celebs thrash around their test track. The WTCC-spec Lacetti on the other hand, is quite a different beast packing 270hp and all the other cool stuff usually found on touring cars. Orido is the first Japanese driver to appear in the WTCC and his most recent race was in front of his countrymen at last weekend's Okayama race.Now he can add WTCC to a list that already includes everything from D1GP and Formula D to Super GT, NASCAR, and LeMans. 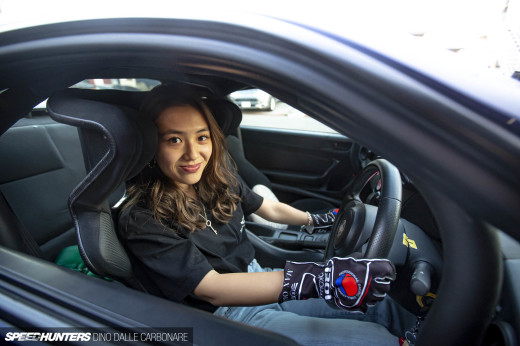 What Would You Ask Maaya Orido?

That's the Chevy Optra here n the Philippines. There is also a Suzuki version right?

I was hoping you would post it Mike. Thanks.

We all know Orido M. knows how to drive (better than all of us combined).

Now,what we have here is a modified Chevy Cobalt? Which, by most (included myself) doesn't appeal very much. To some, it's even a POS car. (I won't say anything in regard).

But I'm willing to bet your ass that because Manabu Orido drives it, now it kicks ass.......some people are real fruitcakes.....lol

Kevin - Yah, Its available as multiple brands. Chevrolet as Optra and Lacetti, Suzuki as the Firenza (or something like that) I think its even a Holden in Oz (but I might be wrong)

Alex.- This is the Lacetti. It was originally designed by GM Daweoo in Korea and shares nothing with the Cobalt. The race car was developed (on a shoe-string I might add) by RML (Ray Mallock racing) who are experts at race car engineering (for example they did the Nissan Primeria BTCC car and the Saleen S7 race car).

Now, despite this being a 'ickle' Lacetti, RML have won races against the big boys of SEAT and BMW, so its actually quite a fan favourite and a great example of how a low buget car can compete successfully. They have a great (full-time) line up of Robert Huff (a fav), Nicola Larini (ex F1 and Alfa ETCC) and Alain Menu (ex BTCC champ).

So, hopefully you see this car in a different light now. For 09, Chevrolet and RML will be using the new Cruze.

Yukinori Taniguchi raced the N-Technoloy Honda Accord earlier this season and I believe Masaki Kano was due to drive one of the Engstler BMW's in Japan too.

Lots of rumours that an S2000 (the spec WTCC run) series in Japan or throughout Asia might happen in 09 or 10.

repsol is such a cool sponsor.

Thanks Andy for the heads up. Yeah I wasn't sure, that's why I put the question mark. Here in the States is not available....the closest thing is the Cobalt.....anyway, thanks.

no problem. In Canada it was sold as the Optra for a while and the Suzuki. Funny, the new Daweoo Lacetti was announced today and it is just the Cruze with a new grille,,,so at least it will be a bit easier in future to work out Chevy's around the world

Yeah I own the American sold, Suzuki badged, hatchback version of this car...

That exact version of the car is available in the states as a Suzuki Forenza... I have the reno which is a hatchback version. Despite the general POS mentality when people see it it is actually a very good option for and FF platform besides a honda civic. Also the stock car weighs roughly 2700 lbs and my hatch is down to about 2500lbs with more to come out of it. I am building it as an Autocross car so in the end I hope to be making around 185whp and weighing around 2300lbs with the driver inside...

man i wish i was able to watch some of these races, no cable anymore

Taniguchi was in a Euro Accord for the race too... I just got around to watching it yesterday....

Do your homework. Orido was not the first ever Japanese man to run in wtcc.