Some more photos for the Speedhunters readers interested in females… the girl gazing out the passenger window of the Need for Speed/Shelby Terlingua Mustang is Need for Speed model Michelle. Look out for more of her on future Speedhunters updates. Thanks to Dan Vanitcha for the great photo of her.

Falken was doing a video shoot for their SEMA video, and here's a behind the scenes look at the making of the video. CJ is lookin hot from any angle!

I wish we could have done some video so you could hear the hilarious commentary happening at this "Modelszone" audition/contest. I was dying of laughter as one of the girls began demonstrating how to wave the flag if she were a Formula D starting grid girl… and there were about 2341958709458721435 guys standing around watching, with mouths open, LOL. Oh but I can't hate on that chick in the gray dress! I'm down for sure! 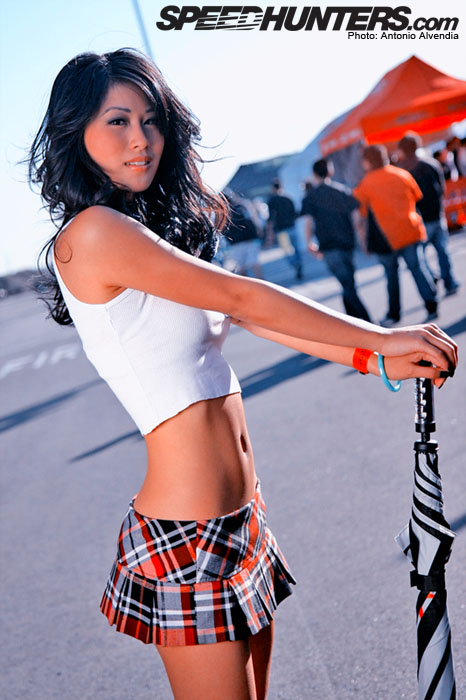 We'll end this with a photo of my favorite new Apex'i model, Vivie… props to whoever asked her to be an Apex'i girl! This girl looks great in print! To all my magazine friends who I've sent this link to, what do you guys think…?

Any chance of desktops?

for the question bout the lisa and eri or taka's ae86.... i choose that hachi roku. and my favorite girls on here michelle on the first pic and vivie on the last

what no way you did get the apex girl (my fav also), you made my day man, and u got her name to. foshizzle! u wouldnt happen to have the other models name also? she was wearing a plad skirt to but black and she had kinda redish hair. anyway antonio nice eye for the girl in the gray, im down also...lol good stuff man the eye candy is sweet.

IF financial difficulties get models that good looking sign me up!!!

No offense on the others but I think her look is gonna come on strong in a bit here. It sure appeals to me.

Vivie is damn hot. Yes!thank you for pointing out the girl in the grey dress...hot!

That Michelle is HOT!!!! She's beautiful..more pics of her would be great!

that apexi girl got me sprung