You know, in all my life of shooting motorsports events, I have never had a competiion car make me cry before…

These were not tears of joy, not tears of sadness, no… they were tears from the toxic clouds of spent nitro gas being belched from a 3000bhp retro funny car.

On the day after the Formula Drift Irwindale Final, the UK-based photographer David Lister and I hopped into the special Need for Speed Edition Shelby Terlingua Mustang and rumbled our way up to Famoso Raceway near Bakersfield, California. We were there to Speedhunt at the California Hot Rod Reunion. I had heard there would be at least 20 fire breathing retro funny cars storming down the quarter mile that weekend and wanted to check it out. 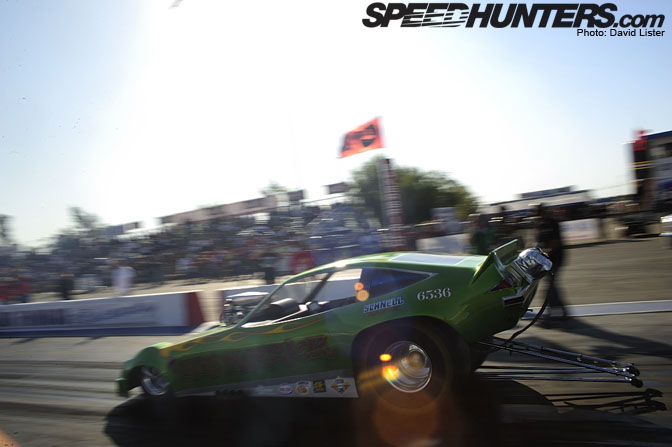 Perhaps this is a counter-reaction against the corporate-sponsored
bubble racing, seen in modern drags, or perhaps this is just a bunch of old
guys recreating a bygone motorsports era. All I can say is this new
burgeoning scene is one of the coolest examples native US car culture
going. I am possibly biased to say this, as I was one of those kids with the Revell funny car models and the Hot Wheels flopper toys in the
1970s. I look at these cars and suddenly I'm five years old
again! …. Oops… my glasses are starting to mist up….

….For any of you that consider yourselves to be experienced racing fans let me recommend that you try and get yourself to a big drag meeting at least once in your life…. preferably to a Hot Rod Reunion event . There's simply nothing on the planet that can compare to the extreme force of a nitro-powered beast launching itself down the track from a standstill to 245 mph in under 6 seconds.

These machines are extreme to the core. When they launch it's like a bomb going off; a sonic shockwave pushes through your body, sparking a reaction of both fear and exhileration. It's quite hard to hold the camera steady when one of these evil contraptions blasts past you!

Most of these cars are based on used modern funny car chassis which have been been rebodied to reflect a retro style. They are restricted by rules to limit air and fuel flow volumes. This results in most cars running to around 3000 bhp but, with engine parts that are spec'd to 8000bhp, it results in relatively few engine combustions. It's a good formula.

At this point in time most of the cars are running to period-specific body styles and paint jobs. Many tribute cars have been built by starstruck kids of the '70s who now have the means to recreate these machines. Some even feature period sponsor decals from long defunct automotive companies.

This Firebird is owned by Canadian Ron Hodgson and is a scratch-built replica of the same car that he ran in the '70s, with the famed Canadian drag racer "240" Gordie Bonin. You know I met Gordie Bonin at Santa Pod raceway 10 years ago but had no idea who he was at the time… The "240" in his name indicates that he was the first funny car racer to break the 240 mph barrier. These days, the clone is on the verge of breaking into the 250 mph zone on the quarter mile. Funny that….

Back in the day there were no Daytona Charger funny cars…. but never mind that…… This car still looks like it could have run in the '70s. Unfortunately though, some teams in the scene are distorting the shapes of these cars to look more like the bubble funny cars that dominate modern drag racing. I really do hope that this practice stops and the spirit of the OG style Funny Cars remains alive.

This car is a period-perfect replica of the original Beach City Corvette that burnt to the ground at Orange County. According to the feature Hot Rod Magazine ran on retro funny cars, in their Sept 2008 issue, it features a piece of the original body molded into its fiberglass shell.

Note the guy holding his head in the BG. The sound is that extreme.

One thing I love about the new nostalgic funny car scene is that this is the true automotive culture doing something for
itself, rather than being dictated to by corporations and rule-makers. People in the scene decided to build these cars when there was no real series in place for them. They just did it for the pure integrity, or the pure love of these types of cars. You have to respect that.

A Jeep? You betcha…. This is a replica of a Jeep funny car that ran the So Cal area in the late '60s and early '70s before the NHRA banned open top funny cars for safety reasons.

A beautiful Chevy Monza… does anyone even remember the Monza these days?

I'm sure you do remember the big Boss Mustangs of the early '70s.

How about the Plymouth Arrow? Nostalgic Funny car rules are for body types up to 1982 and this is an example of one of the later forms of the retro funny car. It was a time when the muscle cars had completely disappeared and were replaced by elongated economy cars like this one.

However this is the top car in this scene. At Famoso, Bucky Austin from Fife, Washington won both the Hot Rod Heritage Series title and took the California Hot Rod Reunion final running a 244.03 mph, 5.749 ET. If you don't know much about drag racing… that's bloody fast!

A Chevy Citation perhaps? Buick Skylark?… erg… these are cars I would rather not remember!

Ahhh sooo hardcore! See the guy in the BG holding his nose? The toxic fumes coming from these cars are very extreme!

So yes there is a film coming (see the camera in my hand)! We'll get it out to you by the end of the month. In the meantime there's still much to write about from my California Speedhunting adventures with Chris Rado, David Lister and Antonio Alvendia. Hope you enjoyed this story!

That first pic is sooooooooooo MONEY!!!

Okay back to driving my super fun car for the weekend! =) ttyl!

Antonio, what kinda car are you flossin' this weekend?

It's still probably one you'd rather not remember Rod!!!

Antonio, I appreciate the compliment..

The "Crazy Horse" Mustang with Hot Wheels colours was my favourite..

In the shot of the Canadian Firebird (w00t canada! :D) i can actually *see* the fumes coming out, those must have been some incredibly noxious outgassings...lol

Love that 'Vette and Chevy Monza. Great post! Wish I could've been there.

I hope that new Mustang is in NFS Undercover! Great Pictures :P!

You know I'm a bit in a state of shock putting this piece together... I only spend 2 days collaborating

haha! that name(terlingua) it is really funny on portuguese

I DO REMEMBER THE MONZA AND LOVED THEM, I OWNED A 1980 BLACK MONZA

You know, we are greedy people at Speedhunters.... We have this compulsive need, to know everything cool

You know, we are greedy people at Speedhunters.... We have this compulsive need to know everything cool

Three Images from three continents... The first from the UK, shot by Paddy McGrath. The second photograph