Just a quick, random snap from my point & shoot Canon Ixy Digital 910 IS pocket camera. When we first began talking about our Southern Cali theme this month, I made the statement that "if you live in Southern California, you could pretty much do something car related every single day of the week if you wanted to." What I'm talking about is car meets, car shows, race events, tradeshows, and yes, even club events. These type of club events are a bit more rare; they're definitely not the norm… and I honestly haven't brought out one of the cars from my collection to one of these type of events in several years… but these types of events do happen once in a while!

Some people say that car life has nothing to do with nightlife, fashion, and/or music, but I disagree. (And there are plenty of TV shows, magazines, clothing lines, etc that back that up.) Especially in Southern California, you tend to see fixed up cars everywhere. Sure, not all of them are tastefully done… but the point is, they do exist, and depending on where you live/hang out, you can see them out and about pretty often.

Last night, I was invited to the Import Tuner 10th Anniversary Party in Hollywood by my friends Carter Jung and Luke Munnell. Actually Luke hit me up about the party when we bumped into each other at the Japanese Classic Car Show in Irvine, so I decided to come out and check it out and support their function. After all, we are friends, and I think that people within the automotive industry should stick together and help one another.

So congratulations to Import Tuner for staying alive for 10 whole years… I think I still actually have the first copy of the magazine somewhere in my magazine collection – those who have been part of the automotive scene for a while might remember this one. It had the Remix Twins, Jenn and Liv, on the cover, with a yellow CRX, on the signature white Import Tuner backdrop. Who remembers that? What's the oldest car magazine you own? 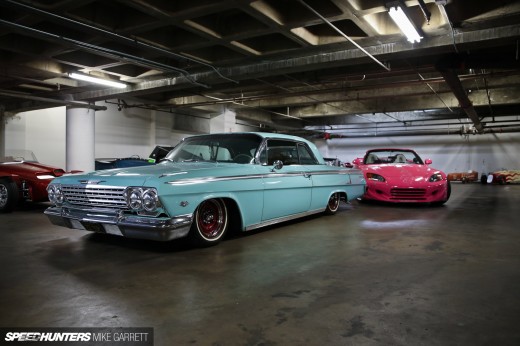 I have got the first Opgezet, it sounds silly now but it is a magazine from Belgium that doesn't exist anymore. It is at least 10 years old.

remix twins!! haha i remember them. i wonder where they are now

Oh, I know Opgezet! I met their staff at SEMA!

Congrats to Carter and the whole Import Tuner Crew. I wish I could be there. *Cheers* to another 10 years of a fantastic magazine. *Cough* DSPORT Magazine December Issue on sale at the end of the month!!! hahaha reppin baby!

wow back when the import scene was mostly asian

remix twinz...they had a crew with all sorts of girls back in da day. oldschool for sure

Oldest issue of 2nr I have is from January 2002. Oldest car magazine I own is an issue of Hot Rod from September 1971. It has a tech feature on how to turbo a pinto. Its crazy looking at all the old ads and parts . Stuff was waayyy different back then.

My import magazine collection is pretty old and big!!

1st Issue of Import Tuner (and almost all of them until present, I stopped buying them because it got wack)

Several Turbo Magazines from 1990-1991 (Super Old school, and almost all issues until present)

And probably have almost all the issues from then until now.

I must have over a thousand magazines at home. I can probably line every wall in my house with magazine covers, and still have plenty left over!