Over the last month and a half over at WORLD Motorsports, we have been building all of Scion's display vehicles for the National Auto Shows across the USA.

We have designed and built a combination of xB's, xD's, and tC's that will be displayed on racks suspended up in the air at these auto shows.

We had to come up with the designs and wheel and tire packages for these cars that would make them look hot and show a different side of Scion. 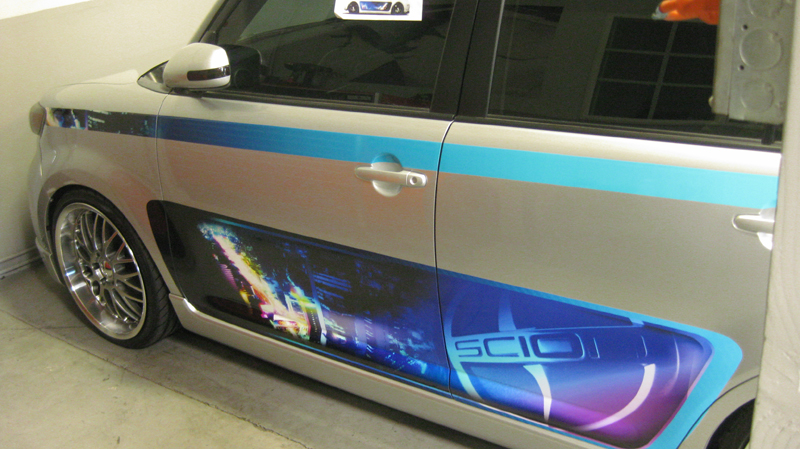 We recently just finished up all of these vehicles and delivered them to Scion. You will be seeing them at a show near you, especially if you live in one of the major cities nationwide.

Here's my xB that you will be seeing more of in the future.

While this all has been going on, the WORLD Racing team and I still have been traveling the country to put as many wins on the board as possible, and have a lot of fun while doing just that.

I returned to my home state of Pennsylvania three weeks ago and headed to Pocono North Raceway to compete in Super Street Super Lap Battles in order to snag a sixth consecutive win. Unfortunately, from all of the abuse the WORLD Racing Scion tC had experienced at Summit Point Raceway the weekend before, some of the components in the car had shifted in a way that weren't visibly obvious. This caused some unexpected problems to creep up us that would keep us boggled all day.

I went out on the track for the first practice session ready to feel it out, but on the warm-up lap, the driver side axel broke. You can't run the car around the track with a broken axel. It just doesn't work, especially in a front-wheel-drive car. Ever time you touch the gas and the brakes it feels like the steering wheel is gonna rip right out of the car and vibrate you right in half.

We got the tC back on the track for the second session, and what do you know, the driver's side axel broke again! I brought the car back to the pit immediately because I did not want to risk damaging the car any more by driving with the axel broke.

I had no idea why the axel kept breaking when I hadn't even pushed the car to 30 percent of its potential. I went back out on the track for the third time attack session, which was going to be our final chance to put down a good lap time. The pressure was on.

On the warm-up lap, once again, the driver's side axel broke. Not only was I extremely frustrated, but very confused also.

At that point, I got on the radio and said to my guys ‘Wish me luck because I'm going to whip this thing around the track as fast as humanly possible with only one axel'.

The car was trying to shake itself to pieces, but I just tried to focus on getting around for one good lap and hope that the other axel didn't give out.

It was a very, very ugly lap. The car was shaking, dancing, and hokey-pokeying and I was only about forty percent throttle because any more than that would have broken the other immediately.

To our surprise, we had put down the second fastest lap time of the weekend, coming within three seconds of the fastest time. Not only that, but we had won 1st place in the Unlimited FWD class! It wasn't the most glamorous win, but I was proud of myself and my team who had worked incredible hard all weekend despite the many challenges we faced.

What up with that xB, that thing is sick! Time attack xB yeah man!

Why does scion like to make their cars so ricey? Why cant they make them all like the 5AXIS cars or like that black Xb you posted. argh.

Incredibly interesting that you were able to lay down the fastest FWD time with only being on 40% throttle and 1 axle!

That xB would look even more sick with these wheels from Aimgain [http://image.blog.livedoor.jp/aimgain/imgs/9/a/9ae79bb4.JPG]

I don't wanna take anything away from Chris Rado and his team (I'm pretty sure they know their stuff more than all of us combined)....but clocking the fastest time with a broken axel leads me to think the competition was super weak. No offence intended.

hey, check this one, http://www.livevideo.com/EzraAnson">lexapro online, %-]],

Look what i found, http://www.livevideo.com/CyrilSawyer">motrin, %-D,

hey, check this one, http://www.youtube.com/DrPaceyDom">valium online, >:]]],

Yeah, it's what i mentioned last time, http://www.youtube.com/DrTennysonMarshal">buy meridia online, 322839,