I just wanted to share this photo with you guys before I forgot… check out this old school Toyota Century that I spotted at JCCS in Irvine. I really dig this car – it has all the makings of an awesome old school street cruiser. This Century's low stance, gold Enkei 92 mesh wheels, and clean, original bodylines just bring one thought to my mind… "damn, that looks gangster!"

Yeah yeah, people who think in proper book vocabulary or "the Queen's English" might roll their eyes because of my choice of adjective… I agree, it's been overused like crazy, but that's what immediately came to mind when I saw this car! It does look like an old school gangster vehicle… just imagine this car in its native habitat; creeping though the dark, narrow sidestreets of Saitama's nishi-Kawaguchi area late at night, with cigarette smoke wafting out of the tinted windows. This car does look gangster! it's kind of like the Japanese version of a six-fo –  a 1964 Chevrolet Impala! Don't you guys think? 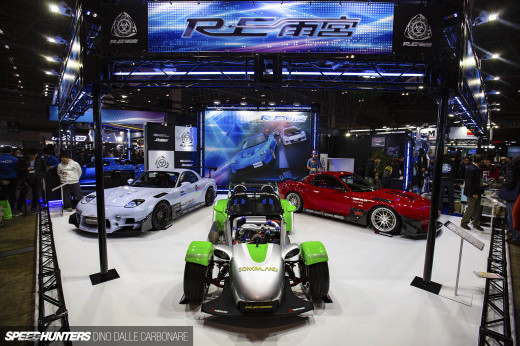 i drool over the overall lines, but the front design doesn't make me happy...

it actually kinda reminds me of mercedes. This is an amazing ca, just look at that paint, you could fall in there....

I love how the '60s Japanese cars mirrored the styling of old American cars. Reminds me of an early '60s Lincoln or Chrysler Imperial.

the inside is just as clean and gangsta as the out side so nice. I remeber this car I saw at toyota fest it was still stock they cleaned it up a lot since then good job to the owner

the inside is just as clean and gangsta as the out side so nice. I remeber this car I saw at toyota fest it was still stock they cleaned it up a lot since then good job to the owner

i wonder if this one has a V12. so hard to tell what yr it is seeing as the newer ones look almost the same.

I think Gangster is perfect verbage. Its "Gangtsa" thats played out.

Where are the Bond villains?

oh man i drool over those Enkei 92's. id kill for those.

ridgezero: are you serious?? dude you can search junkyards and find Enkei 92s cheap; they're super common. and they're only like $25 per wheel, that's including a tire. You see these alot on old Datsuns, Corollas, Mustangs, and even pickup trucks sometimes. Super common inexpensive wheel from the 80s.

Hmm, the Japanese emperor must be gangsta for riding in this car. hahaha! I love Toyota Centuries! Raises to everyone at Toyota for continuing production of the Century!

Huh wat junkyards are u looking through I'm having the hardest time finding those. I need 15x7 4 lug 114.4, I wanna put them on my 83 celica. Yeah I find a lot of 5 lug but i need 4. Antonio if u give me the name of a junkyard in the socal area with those ill be there this weekend, forealz.