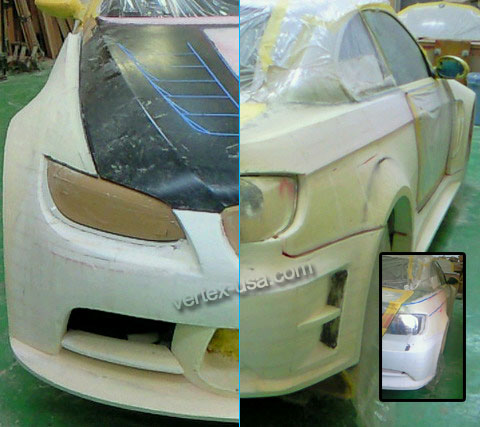 It looks like veteran D1GP driver and Vertex shacho Takahiro Ueno will be saying goodbye to his iconic red Soarer following the end of the 2008 D1 season. According to a press release from Vertex USA, Ueno will be retiring his beloved Soarer and switching to an all new BMW 335i coupe which will be powered by none other than a Toyota 2JZGTE engine. The new Bimmer is currently being built at T&E in Japan, and judging by the teaser photo it looks to be coming along quite well. I would imagine that the car should be debuting some time around Tokyo Auto Salon in January. I can't wait to see what the finished product will look like.

You can see the official press release on Vertex USA's website.

hmmm i know the 2jz is tried and true but is the factory motor for the 335i not good enough? i like how the car looks [mini GT2 ALMS M3]...if he's using his old 2jz from the soarer he should just drop it into another Toyota thats lighter perhaps?

sad to see the soarer go but a good choice for a replacement, looks like the aero is still in development?

I'm not even at work and you made me think of work!

I don't understand why Japanese tuners have to molest perfectly good German cars by putting JDM motors in them. It's like rednecks putting Chevy small blocks into old Porsche 911s. The day someone jams a WRX STi motor into a 911, a part of me will die on the inside.

start cutting your arm emo german fanboy, swaps like that are done everywhere, 914 w/ ej25 etc. In japan japanese motors are easier to come by, In the US, chevy small blocks are easier to come by, getting it yet? Competition cars aren't made to be pristine oem classics, they are made to advertise what a company can do, attract attention and be competitive.

I'm sure Ueno liked the 335i i6tt, but he's been modding the shit out of the 2j for how long, and probably has some random parts laying around the shop, to create multiple engines just incase something blows up and he needs a new one overnight.

Swaps like that are done, but this one is stupid. Trading a brand new turbo i6 for a 10+year old turbo i6... hmm

Finally a good news. I think Ueno should deserve more attention by the media.

Thanks for posting this up Mike.

Emo? Where did that come from? Does emo no longer refer to kids in skinny jeans with bad haircuts?

I will admit I'm a Stuttgart fanboy, but putting a Toyota motor into a BMW is just sad. It's like throwing a RB26dett into a Mustan...oh wait!

You're right though. Oh drifting, the ice skating of motor sports.

Not to sound like a fanboy, but the 2JZ is one of the best damn engines of all time.

The standard rods (forged, from the factory) take 800hp and the bottom end (also forged) will hold out for well over 1000.

If you want to completely build the motor and stroke it etc. then 1500hp is easy.

Why would you want anythything else? The 335i motor has nothing on that.

Yessss, good to see a BMW back in D1gp! Hopefully he'll do better than Matsui did with the e36...

why not keep the bmw engine? it is hard to find parts to them here in japan?

And both the N54 and the 2JZ are great motors. It would not surprise me if the BMW motor became something comparable or better than the 2JZ, but this motor is still so new that no one has gotten the full potential out of it yet.

The 2JZ has proven itself time and time again, and sourcing those aftermarket parts in Japan will be much easier than a fairly new motor with little to no aftermarket yet (even in Germany).

looks amazing, can't wait to see it in action!

I would rather see (or really just HEAR) the N54 in this car... but I totally understand the appeal behind the swap. The parts and tuning are definitely tried and true with the 2JZ. If you want big power, and more reliability... it just makes sense. Navigating through new waters an be an expensive endeavor.

I just hope this means more Japanese companies will step up with product support for BMW's. I'm envious of the aftermarket availability for most Japanese cars.

2JZ I'm not sure on, but better than the SR20d BMW. I personally wouldn't 2JZ a 1-series, maybe a rat look E30 would suit one though

Oh man yeh rat look is so where it's at, Ueno should so do a rat look E30 drift car. Cool idea.

Those photos also are from his personal blog

wasn't the 2JZ developed in Germany?

Finally we get to see what Ueno can do with real steering angle!

I personally think the Japanese engine in German car thing has more to do with the language barrier. I was pretty surprised when I visited Japan at how many people could barely speak a clear word of english. Same reason I think that standalones arent popular in Japan, 80% of them come from english speaking countries like UK and Aus. and dont include Japanese instructions. In Europe pretty much everyone has a decent grasp of English.

wasn't the 2JZ developed in Germany?]

Only the GTE was developed by a German firm to make it race-car-worthy, but the motor was designed and bullt by Toyota (with Yamaha head design).

Whaw man! I hate to see that soarer leave. But maybe it's for the best, I mean Ueno never won in the Toyota, so maybe the BMW will give him a better platform.