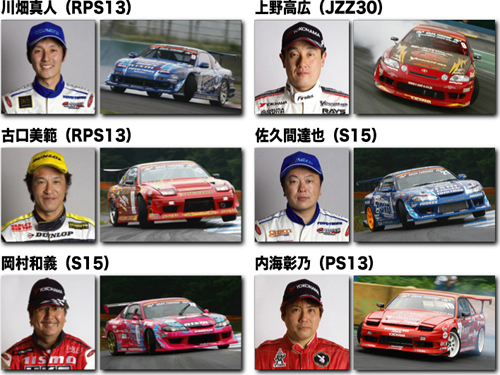 This weekend will be the fifth round of the D1 Street Legal series at Maze Circuit and in addition to the stand-alone D1SL match, there will also be a grip race between a number of D1 drivers in their drift cars. I remember a few years ago Option had a special D1 machine class at their Tsukuba Super Lap contest and it was really fun to watch the D1 cars being used for grip. This time the six drivers will actually be going head-to-head in five lap race around the course at Maze.

Scheduled to compete in the race are-

Should be a pretty fun event. Any bets on who will take it? I'd say that Oka-chan's car would be favorite since he has a lot of experience building and driving time attack cars.

I'd like to see a Koguchi/Ueno battle to the end, cage match style, but my money is also on oka-chan

Oka Chan for sure, he has used his D1GP car for numerous grip battle's

I bet Koguch does pretty good.

Ueno for the win! Yet another reason why D1 is a lot more fun.

taniguchi blew everyone away, and he started nearly last

fun as hell to watch.

im sure okachan will win

that dude w/ the blue s15 (not kawabata) i thought had a racing background as well?

My money's on either Okachan or Sakuma (Sakuma setting the fastest D1 machine time with his APP machine.)

But heavily on Okachan. It's the Silvia specialist against S-chassis cars and a Soarer. Who knows though, I'd like to see Ucchi or Ueno pull it out, though.

i bet utsumi crashes into everyone cause he's hilarious and could care less.

Nice event! would be nice to see how everybody runs, it will have much fun... i will bet that Oka Chan will win =]

Can't wait to see some footage of this event!