The Racing Poster dates back to the early 1900's when race organisers publicized their forthcoming events on large billboards. This was very popular in mainland Europe. The posters were often graphical masterpieces showing a stylized sense of speed in the form of an illustration.

German designer Erich Strenger was approached by Porsche at the beginning of 1950's to assist with producing brochures and posters. Porsche Marketing department commissioned Strenger to produce a number of race posters publishing their race victories. Legend has it that Strenger would be designing the poster as the race was taking place, ready to drop in the results once the flag had fallen. Sportscar racing in the 60's, 70's and 80's were dominated by Porsche products, often in multiple classes, so it was a safe bet! The majority of these posters were designed by Strenger's company.

One of the first Posters which Erich produced showed Briggs Cunningham winning at Palm Beach in 1951. Sebring was a big event for Porsche as they broke into America.

The Mille Migila was a legendary road racing event across Europe. Porsche were quick to announce their success to the world in 1953. Sebring was another big event for Porsche as they broke into American.

During the 60's photography was introduced into the posters. These two are great graphical pieces with original usage and placement of fonts.

But illustrations continued to be used. Porsche had extended into other forms of Motorsport by this time. These posters celebrate the success of the new 911 in hill climbing and rallying while the second poster shows the legendary Dan Gurney in action at the French Grand Prix.

These posters are typical of the 60's. Large vibrant fonts with graphics overlaid on a black and white image. 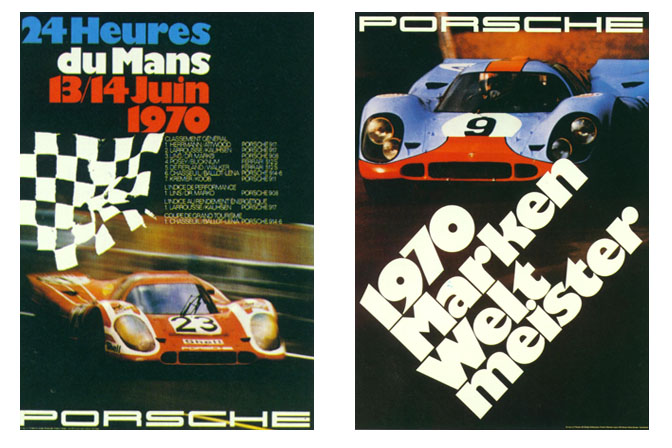 As we enter the 70's the imagery moves into full colour. Porsche had major success in the 70's with the Porsche 917 and 935 and it looks as if new posters were produced almost weekly. These posters celebrate wins at Le Mans and series World Champion in 1970.

The posters above show the 917 and 935 which we covered recently on Speedhunters. 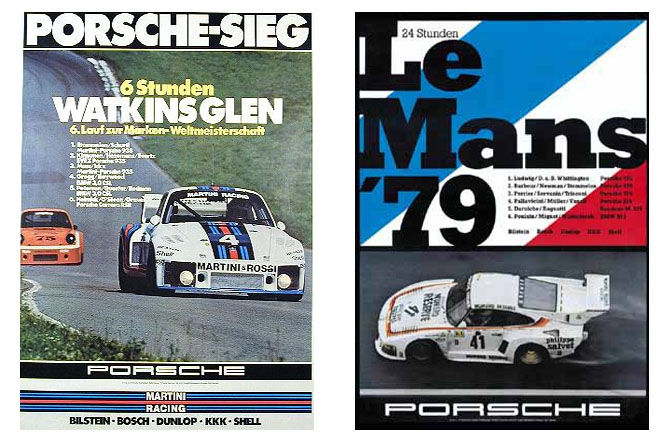 As the 70's drew to a close, sponsorship was taking over. Note the Martini Racing banner at the bottom, along with Porsche's official suppliers. 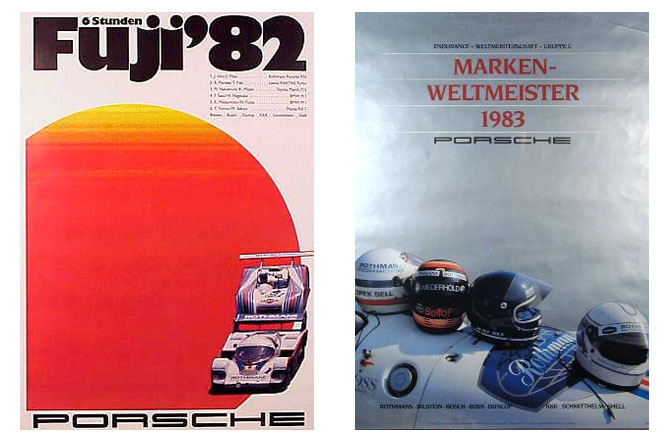 The Porsche 956 and 962 Dominated Sportscar racing around the world in the 80's. One of my favourite cars of all-time. Hundreds of posters were released to announce forthcoming events or race victories. The Poster on the right brings back memories of the Golden era of Rothmans Porsche. The helmets of Derek Bell, Stefan Bellof, Jacky Ickx and Jochen Mass. All four were stunning drivers.

The 1000km Nurgburgring poster shows a great plan view of the 956. This was one of the widely available posters. I've seen this in many shops over the years. 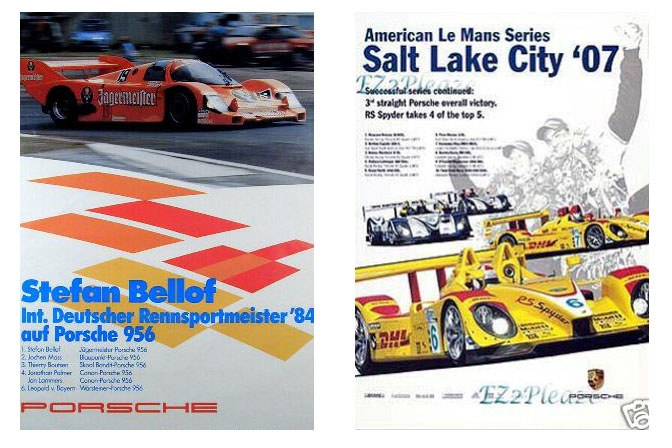 Stefan Bellof was a fantastic racer for Porsche had a good future lined up in Formula 1 before his life was cut cruelly short in a Sportscar race in 1984.  As the 80's drew to a close, magazine advertisements were used to communicate racing triumphs. However, it was good to see Porsche had released some ALMS posters recently. I found this one on ebay, celebrating Porsche's win in Utah last year.

As a designer... and a total typographic NERD... these make me incredibly happy.

As NOT a designer and a semi-typographic nerd... these make me incredibly happy.

Okeyyyy ! I get it ! ROD and friends have a plan to make me an addict of Speedhunters !

Where should i click for downloading one of these wonderfull wallpapers in 2048x1680 ?

Wow! LOVE this feature. Porsche has some iconic ones. I particularly remember a few taglines:

It takes a very good car to finish the 24 hours of LeMans. Winning, on the other hand, requires a Porsche.

0-60 in ____. Find out why those monkeys the shot into space were always smiling.

And one from a shirt my dad had that said Nobody's Perfect and showed the results from an endurance race where the entire top-ten were Porsches except for a lone BMW in 7th or so. Cool stuff guys...

Is there a website where these posters or similar ones can be purchased? I'm totally into this sort of retro stuff for decorating my office!

Damn Andy, I thought these were my little secret! I've had a few of these on my wall before

This is awesome Andy. Domo arigato. Although Danka would be more appropriate. One of my favourite Porsche posters had a fantastic profile shot of a 936 along the bottom, but I cant remember what race it was from. The 936 looked so wild in profile...

Chris - here are a few websites.

Really intersting and nice posters but for few weeks you speak only about Porsches! There were not only their cars who did Le Mans!

^ Andy thanks a bunch!

Bomber - This is 'Porsche' Month! If you search Le Mans then you will find some more posts about Le Mans this year including Corvette, and DBR9 features.

As an EX-designer and an semi-typographic nerd... these make me incredibly happy.

Andy and everyone else,

About a 4 years ago I contacted the Porsche's Historisches Archiv and Mr. Lewandowski about working together on an updated and expanded version of his 1984 Porsche racing poster book: 'Porsche Plakate - Posters - Affiches'. After a few years of determining who exactly could publish the book, Delius-Klasing stepped up and we started research. Over the past 18 months I have gone through 21 private Porsche poster collections looking for racing posters missing from Porsche's extensive collection. There are over 35 new posters that date from 1951-1984 not to mention the hundreds of posters printed over the last 23 years. It is quite remarkable to see the artistic progression through the decades, especially now that each poster is reproduced in full color! The draft copies really look magnificent.

During my search I uncovered the earliest factory commissioned poster ever found which commemorates Porsche's 1100cc class win at Le Mans in 1951 with a 356SL coupe. It has been said that this very early victory was the whole reason Erich Strenger started designing posters for Porsche in the first place. It is very likely that the '51 Le Mans 24 poster is the first.

If you have any questions regarding the bilingual (German/English) 'Porsche - Die Rennplakate: Von 1951 bis Heute' please ask away.