You’ve all heard the old sales pitch. Take two great concepts and mix them together to produce twice the product or more. All well and good, except that is rarely the case, usually the strengths and benefits of both ideas get diluted in the process and somehow more becomes less.

However when the principle does work the results can be spectacular. Back in 1971 Porsche were faced with a bit of a problem, what to do with the all conquering Porsche 917 when the Le Mans rules had made it obsolete. The obvious solution was to adapt the endurance car to run in the greatest sprint sportscars series of them all, the Can-Am Challenge. This also had the happy result of being able to target the attention of those in Porsche’s most important market, North America.

The Can-Am Challenge was perhaps the wildest and most extreme series in the history of motorsport with few restrictions on what could be done to maximise performance and it was the birthplace of many of the aerodynamic features that are now commonplace on all race cars. (wings, ground effect, diffusers etc)

Even a car as mighty as the base 917 that had dominated endurance racing for two years would require serious modifications to become competitive in Can-Am against the McLarens, Shadows, Lolas and others.  The first change was to chop the roof off to create a Spyder that gave the Porsche the same base configuration as its competitors. Then came the power game. Several options were considered amongst which was increasing the engine size and number of cylinders but a more efficient solution of fundamentally increasing power was achieved by using two turbochargers.

The concept of turbocharging, ie. the forced induction of air entering the engine using a turbine driven by the engine’s exhaust gases, had been around since the 1900s and was in common use in aviation. But applications in motorsport were rare, so this was a radical step. The 5-litre flat-12  cylinder engines was boosted by two Eberspächer truck turbochargers. More than 1,000 horsepower was available at 1.6 bar boost but for the races the boost pressure was generally restricted to 1.3 bar, the power reaching 900 horsepower. This was more than enough to defeat McLaren Racing’s Can-Am cars, powered by 8.1 litre Chevrolet engines, rated at 750 horsepower.

The original idea was for Porsche sportscar superstar, Jo Siffert, to run the programme and drive the car but his untimely death at Brands Hatch while competing in a non-championship F1 race in October 1971 meant that the plans had to be revised. Roger Penske’s team took over the package and his lead driver, Mark Donohue, was scheduled to take on the might of McLaren.

However during early season testing at Road Atlanta Donohue had a massive accident which would put him out of action for the middle part of the year, so George Follmer was drafted in to take the attack to the McLaren team. He did so with great success, taking victories at Road Atlanta, Mid Ohio, Road America, Laguna Seca and Riverside. This collection of wins netted him the 1972 Drivers’ Title.

For 1973 the Penske team moved up a gear with a new car, the 917/30 for Mark Donohue. The 917/10s were acquired by the Rinzler RC Cola team. Follmer and his team mate, Charlie Kemp took one victory each in opening rounds of the Can-Am Challenge.

The Porsche 917/30 (aka TurboPanzer) was quite simply the most awesome racing machine of its time, perhaps of all time. The engine was increased in capacity to 5.4 litres, giving a healthy 1100bhp in race trim, with up to 1300bhp available for qualifying. The chassis was lightened and the bodywork extended with particular attention being paid to aerodynamics, giving a marked increase in top speed. Performance figures quoted at the time make illuminating reading: 0-60 mph in 1.9 seconds, 0-100 mph in 3.9 seconds, 0-200 mph in 10.9 seconds, and a top speed of 257 mph.

Back then turbo technology was not as developed as now, so the power came in with a bang after a momemt or two of lag so driving the car on the limit called for fantastic skill and amazing reflexes, tightrope walking without a net. The massive horsepower on tap did not faze Penske’s lead driver, as Donohue put it “If you can make black marks on a straight from the time you turn out
of a corner until the braking point of the next turn, then you have
enough horsepower.”

An indication of how dominant the Penske car was is shown by the fact that Donohue took pole position and set fastest lap in every race that year. He also scored outright wins at Watkins Glen, Mid Ohio, Road America, Edmonton, Laguna Seca and Riverside

The crushing of the opposition by Porsche in 1972 and especially in 1973 combined with the energy crisis and spiralling costs killed interest in the series and after a much reduced season in 1974 the end of the line was reached. Can-Am in its early pure form was over. 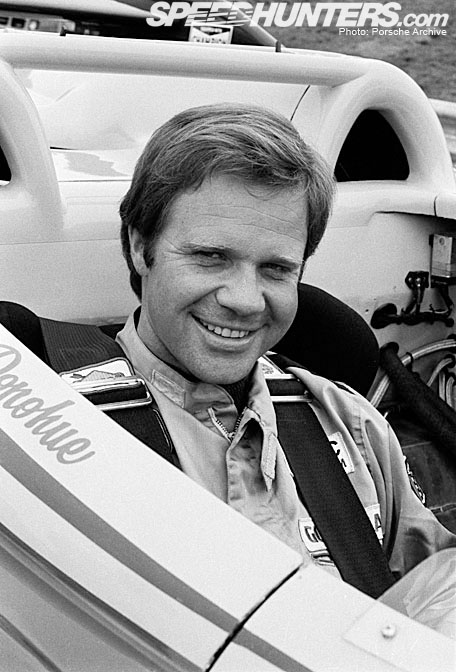 Donohue, Penske and Porsche had one last trick up their corporate sleeve for the 917/30. On August 9th 1975 the team assembled at the tri-oval Talladega Superspeedway. The car was configured for top speed running and set a closed course land speed record of 221.160 mph. Sadly this was to Donohue’s final triumph as he suffered fatal head injuries while practising for the F1 Austriam Grand Prix in Penske’s March 751 two weeks later

The Porsche 917/10 and its succesor the 917/30 can be counted amongst the truly great cars in the history of the sport, achieving performance levels that have remained as a bench mark for others to be judged against. They are the deservedly regarded as legends of motorsport.

In view of the above you can understand why I jumped at the chance to look at the 917/10 when Rod, Antonio and I were at the Leipzig Porsche factory.  It is not every day that you meet a hero, back in the early 70s I would devour the Pete Lyons’ Autosport reports of the Can-Am races.  So to see one of these cars up close and personal was a high point of our trip through Europe.

you guys will love this dvd.

that engine is the most retarded thing i've seen in awhile and i love. if you have anymore shots or any high res shots PLEASE post them up. old race cars are too cool.

Great write-up and images. Thanks!

These cars, despite the pain and loss they brought, always make me smile.

The numbers quoted are just amazing and you can't help but be impressed.

Great post John, Speedhunters is such an informative educational resource!

I love the Porsche Archive shots too.

I remember seeing the Porsch 917-30 (Penske/Donohue) at the

Rennsport Reunion at Lime Rock, CT with my son in 2001. It was a truly spiritual experience. Mark Donohue was my favorite driver when I was a kid. That's all. Plain and simple. Anyton Senna was a close second. No Fear...true pioneers. may they both rest in peace(@220 MPH)

Motorsport is a funny way to make a living, driving round and round in circles, faster and faster if

Motorsport is a funny way to make a living, driving round and round in circles, faster and faster if

Back in the glory days of the Roman Empire, the alignment of the planets was considered to be critical

Ok let's continues on with our tour of the Porsche Museum. We've already shown you the restoration