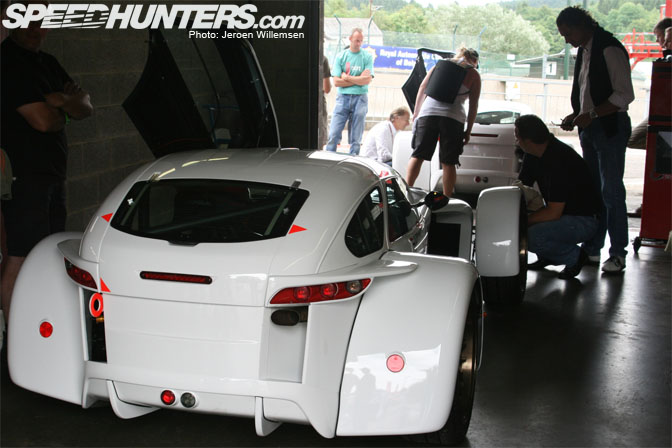 While I was walking through the paddock on Friday I spotted this car in one of the pit boxes. I recognized the car as a Donkervoort D8 GT. It's the first Donkervoort with a carbon fiber hardtop. The car weighs about 650kg and you can choose between three types of engines. All the engines are built by Audi and the most powerful one has 270hp. All cars are built in Holland in a town called Lelystad were they opened a brand new production facility in 2000.

On Friday the car made it's racing debut on Spa, it was more like a shake down for the car. I didn't see it run on the track unfortunately. Rod didn't know the car so I will be making a car feature in the nearby future, stay tuned.

Damn these Donkervoorts, REALLY, REALLY FAST! Even faster than the GT-R on The Ring.

Wow, I love these! Probably the most developed iteration loosely based on the Lotus 7.

Donkervoort used to be a dealership for Caterham so I guess there are a few familiar parts involved. Having been a passenger in a Caterham Superlight up the Prescott Hillclimb course I can say that you feel very exposed in a Caterham, anyone know if the hardtop helps prevent that sensation in a Donkervoort?

I know it's really different because you wont feel the sensation of air passing you.

That's cool. I enjoyed being exposed till i got hit by a stone =P

this is actually a beautiful car