While family duties unfortunately kept me from joining Rod and Antonio at Ebisu Circuit for the Summer Drift Festival this weekend, I did find a little bit of time to slip away and check out the latest round of the Yokomo Drift Meeting at Yatabe Arena here in Tsukuba. Besides the actual RC drifting at the Yokomo Drift Meeting, the number of real cars on display always makes the event worth seeing. Although this was not my first time attending one of these events, I am still amazed and just how big they are. Some of the entrants came to Yatabe from as far away as Niigata and Osaka just to compete in the competition.

As you can see, there were also plenty of spectators on hand to take in the action. Some of them were getting REALLY into it. To the point where you would think the cars were larger than 1/10 scale. I am still amazed at how big Yatabe Arena is. In a country as cramped as Japan you might think there wouldn't be room for stuff like this but you gotta have room for your hobbies right?

As usual, Yokomo had their full line of RC drift cars on display. Just look at the detail on these things. 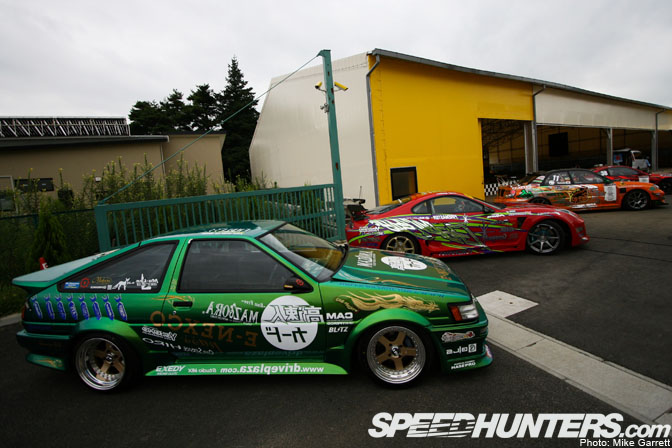 Here are a few of the life-size machines on display outside.

I finally got a chance to see the Celica-nosed JZA80 Supra from D1SL and MSC, and I can say that it looks even cooler in person than it does in photos. This car is so nice!  It looks more like a show car than a competition drift car. It actually turns out that this car is local from right here in Tsukuba area. My wife said that the "tutuanna*" decal on the hood is the name of a local lingerie shop chain. Nice.

And the rear view. Almost looks like a normal JZA80 from here.

Here some RC cars take to the track during one of the free run sessions. I am still working on improving my RC racing photo skills. It's definitely a little different than photographing real racing. For one thing, you almost have to lay on the ground to have shots that look they aren't taken from a helicopter.

I was loving the RC Kenmeri Skyline drift car. Check out the exhaust and the external oil coolers in the front. Seeing the different body styles and craftsmanship on the exteriors is one of my favorite parts of RC drifting.

Not of all the real cars on display were drift machines. This Odyssey from Sessions was gorgeous. Honestly these are probably the coolest vans ever built anywhere. Except maybe for the Renault Espace F1. 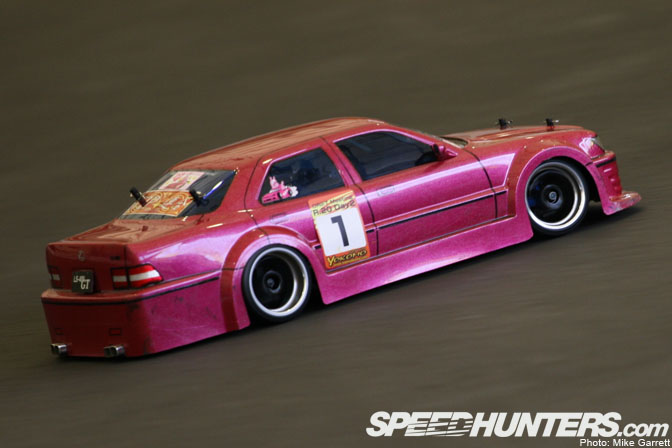 You might not see many people drifting VIP Toyota Celsiors in real life, but in 1/10 scale anything is possible. Nice job on the quad-tipped exhaust.

Looks like this car was heavily inspired by the old Hoshino Car Style FC3S and its Mazda 787B-inspired livery.

This Tec-Arts-built 5-door Starlet was also on display in the "lifesize" section. It's pretty rare to see 5-door Starlets with the widebody fenders. It also helps that this particular car has 245ps.

The white Sessions Odyssey parked outside was not the only one at the event. One of the top level drivers was using this flamed Odyssey body on his RC car. I also saw another guy running a '68 Camaro body.

More Yokomo products on display. The smaller cars in the front are part of Yokomo's new Ichiroku M series. The perfect thing for those kitchen floor drift competitions.

I can't say that I know much about what makes for good RC drifting, but the "driver" of this green Levin seemed to be doing a great job of putting the back end up against the wall and getting big angle while drifting.

A JZX90 Mark II and a JZX100 Chaser going at it during one of the practice sessions. These were two of my favorites as far as exterior style goes.

Instead of being up at Ebisu for the Summer Matsuri, Team Orange's Kazuhiro Tanaka was at Yatabe Arena where he was driving this cool replica of his D1 Impreza. Tanaka may be an amazing drifter when it comes real cars, but I bet he was pretty intimidated by some of the elementary school-aged pro RC drifters.

And I'll finish with a shot of this 1/10 scale FC performing an impressive slide in front of the fans in the "gallery".

I guess when you consider all the hassle involved with owning a real drift car, you can see why there are so many people involved with this hobby. I don't know if its a good idea for me to keep attending these RC drift events as I don't think my wife would be terribly happy about me picking up yet another new hobby.

Nice article. It would be nice if sometimes you get to rc drift events. Its always helpfull to get some inspiration when I make new bodies!

2. Hoshino's FC was more along the lines of the JACCS accord and Civic in Japan Tourning Car....

I want that Starlet

If anyone is interested there is a similar event going on at Driftspeed in Los Alamitos, CA on Aug 16-17

damn... i wish we had events like dat in hawaii... its always parking lots, and that small carpet course in rc motor sports...

RC Drifting is quite happening here in Malaysia too. Even Tengku Djan, the Tandem Assassin has his own bodyshell and I heard he has around 4.

And Hoshino's FC was one of the coolest FCs ever. Too bad it's been completely taken apart and wrecked now. Chiiing.

And Hoshino's FC was one of the coolest FCs ever. Too bad it's been completely taken apart and wrecked now. Chiiing.