“You are next”, said Antonio to me. Immediately the
butterflies started. We had set our video and photo cameras up next to a
section of the infamous Touge course at Ebisu Circuit and were watching Team
Orange’s leader Kumakubo and fellow Speedhunter Naoto Suenaga doing ride-along
tandem battles in their S13 demo/practice cars.

Now I’ve played the Ebisu Touge course many times in Need
for Speed Pro Street… and I tell you I’m totally lousy at it. I was one of the
better video game drifters at the NFS office during the development of Pro
Street and for the life of me I couldn’t make it through this course without
making a mistake. Somehow my drifting skills reached a limit and I just
couldn’t get the hang of it. Way too advanced for me, perhaps my thumb control
is limited by my age, dunno.

So I had an idea what was in store for me: the craziest
drifting course in the world. It’s a closed track replica of the Japanese roads
where the art of drifting first developed many moons ago; complete with street
lamps!

So a ride-along with one of the world's top drifters:
Kumakubo, on one of the craziest drift courses in the world…. hmmm…. It would be stupid
to turn that one down no?

As we began accelerating into the first turn, an intense wave of vertigo
enveloped my body.  My leg shot into the foot-well, clamoring to press an invisible brake pedal to slow the car … but
immediately the sense of panic passed and was replaced with a sense of elation
and awe.  Kumakubo threw the car about
with such finesse and style, it was not really scary at all, but a feeling of
pure fun.

We did around 3 laps of the course, with me hooting like an American and Kumakubo perfectly chucking the S13 convertable through the undulating, twisting course.

This picture gives an idea of the type of elevation changes on the Touge circuit. 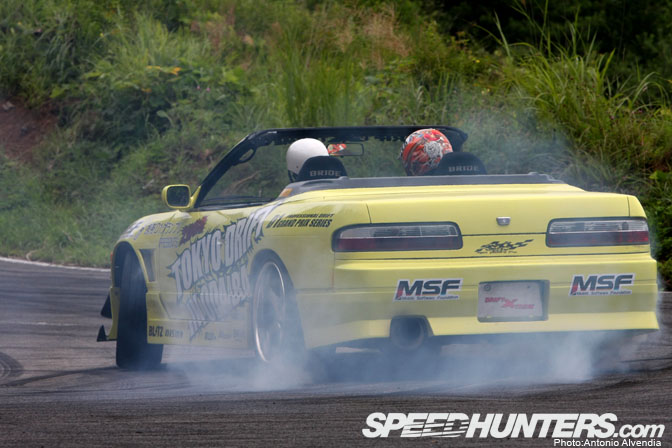 As we pulled off course I was grinning from ear to ear. What an incredible once in a life time experience!

Very quickly though, I started to feel a bit quesy as a feeling of low level motion sickness immediately started to set in. Oops….. Unfortunately I'm the type of person that is suseptable to motion sickness in cars. Doing things like reading and using crackberrys while in motion is a strict no-no for me.

So for the rest of the afternoon I had to pound up and down the various circuits of Ebisu with the Speedhunters HD camera setup while feeling rather dizzy and quesy. Erg, was not pleasant.

Do I regret the experience of a ride-along with Kumakubo? Absolutely not, I'll cherish this experience as long as I live.

Would I rush back to take another drift ride-a-long any time soon? Hmmm….. Not so sure about that one! It's a bit of a case of weighing out if the rush of pleasure for a few minutes outweighs the hours of discomfort afterwards. Which would you take?

You don't know how much i envy you atm!

I dig the big grin and the black-rubber-on-black-top action (Y);)

nice! yeah its a great little track. i just drove it again a couple of days ago after not going on it for about 6 months. so many blind corners! scarrry

Top down, no rollbar.