While we were at the Ebisu Circuit Natsumatsuri – Summer Drift Festival, I couldn't take my eyes off this GX71 Toyota Cresta that was running Ebisu's Touge course! It's no secret that I absolutely love 1980sToyotas, but just look at how clean this Cresta is! This is a Toyota Cressida in the USA… isn't this clean Cresta inspiring? I know it makes me want to look for a clean Cressida with 5-speed manual transmission!

I like the old school aluminum window visors, and the shape of the taillights and the chrome bezel that surrounds the license plate. This rear section is a little different than the US models – I think it looks cleaner because it's more simple. The owner of the Cresta fitted it with a single canister exhaust, which is a newer style exhaust compared to the year of the car, but I like the way it looks alot.

Here's the owner of the Cresta and his girlfriend drifting down the Ebisu Touge! What cracks me up… is the fact that the driver is wearing something that looks like a bike helmet, and the passenger isn't even wearing a helmet! I don't think people in Japan are too worried about safety… I think it's kind of funny, because there's no way you could do something like that at a drift event in the USA!

Damn, look at the wheels up front! These are the old school (first generation) predecessor of the Work Equip 03. In the rear, we have SSR Formula mesh. I don't remember the exact specs on the wheels, but I'm pretty sure they're 14x8J.

The steering wheel (in Japan, they refer to it as a handle) is a standard issue Momo, but check out the digital dash display. Pretty cool!

Here's another peek into the interior of the Cresta, I just snapped it real quick while they were changing the rear tires. As you can see, the inside is all business. No rollcage because it's a street car, but the owner installed a Bride adjustable bucket seat to keep himself in place while drifting. The funny baseball style helmet and driving gloves are sitting right there on the driver seat, and the passenger side, we have an HKS towel.

In the USA, the MX71 Toyota Cressidas have an M-series engine; usually a 5MGE. I've heard of some people having 6MGEs, and others swapping in turbocharged 7MGTEs (from MA70 turbo Supras). However, in Japan, the Crestas are GX71s; therefore, they come with a 1GGTE engine. It's a six cylinder inline turbo engine! Awesome! Visible mods include an HKS intake filter, TRD sparkplug wires, oil filter relocation kit and an Earl's oil cooler. Look closely at the adjustable camber plates – they are mounted so they slide diagonally instead of laterally. The car's owner swapped the sides (left side is mounted on the right strut tower, and vice versa) so that he could adjust the angle of the strut housings towards the back, not just the degrees of camber. Some people do this because they feel it helps the steering input of the car. Hmm, I've never tried it myself though.

I just learned that the Japanese market Cresta has these cool twin-bumper lights flush mounted into the bumper. Man, that's cool! The MX71 Cressidas in the USA don't have those cool lights! Damn, our 5mph US crash bumpers suck.

I'm all about the fatlip Work and SSR wheels! I love it!

Notice anything different about the rear lights? If you look closely, you'll see that the car has LED taillights!!! Right as I was about to say, "damn… Toyota was soo ahead of its time!" I learned that this LED setup was a custom job… each LED was individually placed into the taillight housing. What a pain! I don't think I have the patience to do something like that… but it does look pretty cool in my opinion. Except for the two LEDs on the left side that have burnt out!

Either way, it doesn't matter. I love this car! What do you guys think?

8 Seconds In A Barra-Powered Toyota Cresta 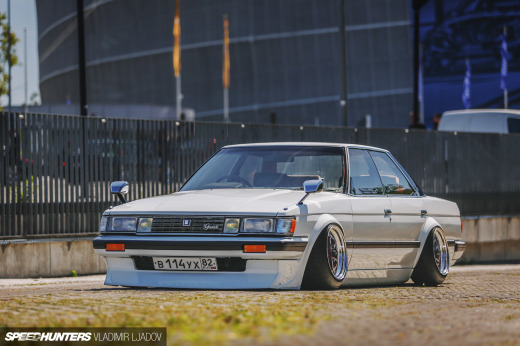 A GX71 doesn't get better than this, realy awsome car.

a manual cressida w/ a 1jz would be totally sweet, right up there with a 20v AE86 IMO

i realy don't like cressida's, the third window realy destroys the design for me. And the GX71's are now almost 25 years old so import to the US is possible.

damn, makes me wanna find a cressida. These are actually growng on me, makes me kinda want one more than an AE86 hatch.

US Cressidas are awesome.... AE86 suspension/MA60 Supra suspension interchanges with it... just need to get Cressida camber plates, but u can get em from cusco. for LSD u can use a supra LSD or weld it if all else fails... now to find a clean one!

wow that is sexy

Very clean car, and I like those LED lights! The interior seems well-preserved too, vevlvet interior!

Awesome write up, this is what i wish my mx73 was lol

lol this is what i love about drift barge's, he's just kept all standard aircon and power steering in there etc... drifting in comfort

Hi Antonio, this is Chihiro.

This is really cool GX71 Cresta!

The driver keeps his 71 really clean even though he enjoys drifting, and I like that.

I modified one of them just like this Cresta.

I lowered it and put Hayashi Racing style rims, and definitely it looks cool!!

It looks kinda Bousouzoku oriented style, but it is Japanese cross-cultural hardcore style just like this GX71 Cresta.

clean... he needs to get a cooler helmet, it looks like something for the guys that ride the short bus. haha jk. VIP Drift!

MAN you won't believe the cool stuff i did the other day. i will post it on Speedhunters this week!!! i have so many more cool 80s car photos on the way!!! I <3 80s japanese cars!!!

I totally like this Cresta, but i disagree about the exhaust tip. being a Dub guy i would prefer to see something more euro-jdm on the back of that, more of just a single straight pipe, similar to this:

but otherwise it's very clean! i love the front wheels and i'd probably put Equip 03's on both front and back to balance things out

Sick car!!! Love the stance/ setup! Those wheels are to die for!!!! Also love the LED lights! will have to do that with my Eunos XD

Love it man. Your toyota fetish is starting to rub off on me dude

Wondering if i can grab your email, im great friends with a guy you know call Hoshino.

One of my sole reasons of moving to Japan was to live next door to these guys and go drifting with them!!! Would love to have chat mate!

yo anybody know where i can get parts for this car (interior & exterior). Holla back.

Hey Anybody got any contacts with getting cressida parts.........somebody please help me out....... Thank you.

toyotas are the best, sure the r31 is cool but this is better. i wonder if they come pillar-less?