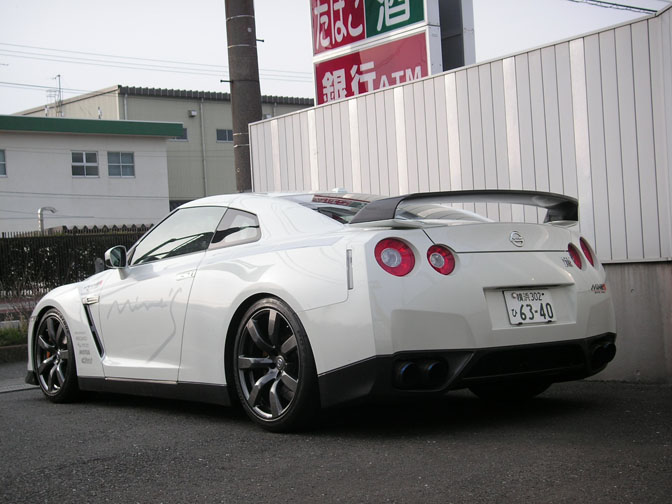 Mine's; A Japanese household name in tuning, made famous by numerous Hot Version and Best Motoring DVD's. We all remember the battle between the Amuse Supra and Mine's R34; the battle of the straight inline six. The mastermind behind Mine's is Michizo Niikura. He started his career at Bridgestone but turned his attention to tuning cars. Established in 1985, Mine's makes parts for the Skyline R34, Lancer EVO, Impreza WRX and the 350Z.

Mine's have had a lot of success with their R34 and customers from all around the world wanted to be a part of the Mine's spirit, "form follows function". With the release of the R35, Mine's have entered a new chapter and started designing new parts for the GT-R. They even have two, one of them was shipped to the US to make a appearance in the new The Fast And The Furious. The R35 you see in the pictures is their development car and has been driven hard on Tsukuba where it recorded a time of 0:59.367.

The Mine's shop is located in the Yokosuka suburbs. The only tell tale sign that you are in front of the Mine's headquarters is a small sign in front of the building. The other noticeable thing are off course the customer and demo cars in the parking lot. Within the building Niikura has a garage, a shop and his own R&D center. The R&D centre is mostly used to improve on his VX-Rom ECU's. The first VX-Rom was used in a Nissan Skyline R31 in 1988.

The 350Z demo car from Mine's is their only naturally aspirated car. The car has 350ps thanks to a fully reworked engine with forged pistons, higher compression and a new VX-rom ECU. Mine's also enhanced the exterior with some nice carbon goodies like the rear spoiler, front spoiler and the air scoop.

The famous Mine's N1 R34 GT-R is being worked after some laps on the circuit. The car became famous after its record braking time on Tsukuba; 0:57,746. You have to remember that this car is still street legal and can compete with full blown race cars. The car wasn't build with high horsepower figures in mind, but instead it was build as the ultimate road going car.

It features some custom parts but most them you can buy directly at Mine's. For a complete run down on all the parts used I suggest you take a look at Kanzen Performance website here.

The shop looks very organized when you compare it to other tuners in Japan. It's also very big in comparison. In the cnetre you can look for your favorite parts on the internet and on the shelves they have some parts lying around. Did you notice the special Mine's surfboard?

You can't have a shop without the mandatory magazines. Z-Magazine, Hyperrev and the GT-R Magazine are all their for your viewing pleasure. Just browsing through these magazines and picking up some parts, how good can life be?

A stage 1 RB26 ready to be fitted. You can by a complete engine straight from Mine's. You can choose between a stage 1 (480hp) or a stage 2 engine (580hp). All engines are hand build by Mine's chief engineer Nakayama San. A complete stage 2 engine without the ancillaries will cost you 3.000,000 yen. I could import a nice car for that LOL.

Some parts on the shelves like stainless steel exhausts, camshafts and preprogrammed ECU's. All these parts have had extensive testing on Mine's own demo cars on track and on the road.

A final shot of their Nissan R35 GT-R. The car is rocking a new ESTA suspension system specifically designed for the road. The OEM rotors are replaced by Mine's items and the pads are upgraded by Pagid ones. Mine's claims that when you purchase their Titan exhaust system, VX filter replacement and their VX-Rom you will have power increase of 50 to 60hp.

I still like the Mine's mentality although I do not have the money to buy any of their products, well I do have a key chain. Maybe someday.

Thanks to Nicholas Martin from Kanzen Performance for taking the pictures and the info. For all your questions about Mine's or if you want to order parts please contact him through Kanzen Perfomance.

Nice post. I'm relly amazed at how Mine's do things. It's like their own style. They prove that you don't need the biggest turbo to gain recognition and respect on the street and on the track. And uh, their parts are really really expensive. Like a 13,000-dollar suspension.

I've been waiting for this shop feature for a while, it would be a shame to spend so much time in Japan without visiting Top Secret though...

Mine's quality is top notch.....yet it's just overrated. A front dry carbon splitters for $5K ? Are we out of our minds?.....there are TONS of really good companies in Japan (that make good stuff, as good as Mine's)...and they won't rip you off like Mine's does.

Really cool, Mine's is one of my favourite Japanese shops.

Of course, you pay what you get for, but after all, many things are a bit overrated and hyped. Look at that Nismo Clubsport Package for the R35, offered on gt-rr.com... it costs 58k bucks! That freaking awesome, a brandnew M3 costs only some 10k more! Or the new Nismo titanium exhaust incl. diffusor... 20 grands! That's just crazy...

Though I'm usually not a Z33 fan, that white one is a car I'd love to own, so understated!

@Alex: With the R35, I think Mines is a little off track on their tuning directions. From R32 to R34, Mines have never placed much emphasis on body parts. I think R35's stock spec is so advance that Mines couldn't find much to improve on (R35 is a quite a few steps up from the previous GTRs). Yea that carbon splitters is just outrageous, the performance gain (if even noticeable) doesn't match up to the 5K cost.

yeah i remember watching mines r34 for the firts time all i could say is shxxxxxt...lol