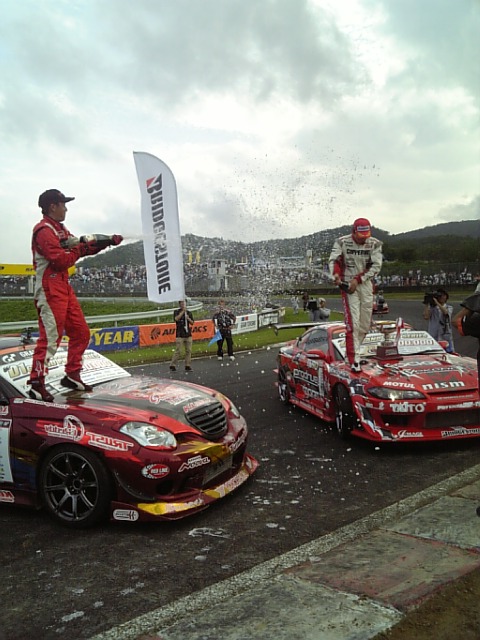 We should have some more in depth coverage up soon, but for now I thought you guys might be interested in hearing the results from this weekend's D1GP round four at Okayama International Circuit.

Looks like Youichi is continuing his hot streak after his win at the Odaiba exhibition match. His new S15 seems to be suiting him well. Just as impressive is that Hirota took home second place in his JZX110 Verossa. Congrats to all!

What is a Verossa? Is that the car pictured on the left? It looks like a bizarrely mutated Lancia Thesis.

it not sell very well apar.

its basically a gs300 wit a manual trans. (dont take my word for it, i never actually seen a verossa in real life)

I cant believe he's up at 2nd place now. He never used to get passed best 8 or even best 16. His skills must have improved since I saw my last OPTION vid. I'm also happy yo see Yoichi back on top again. He's been one my favorites since the APEX'i FD days.What happened to KUMA?

It was a real wet during the competition, it seems that Ken has lost it's touch, he really need to step it up a notch

good to see youichi getting back on the podium