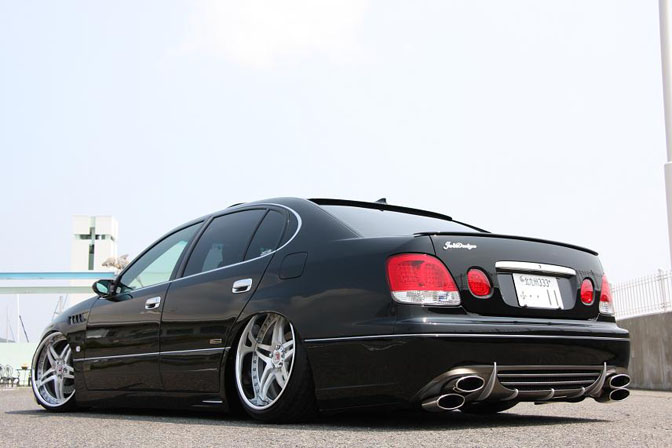 The Toyota Aristo or commonly known as the Lexus GS series is a very popular platform within the VIP scene. Companies like Junction Produce, Aimgain and Job Design still offer several body kits for this car. The car came with the indestructible 2JZ twin turbo engine (code JZS161) to give it the performance other cars didn't had.

This customer car from Job Design features their newly designed body kit that was just released.

The wheels are made by Klassen and are called the K5.1. Some owners of VIP styled cars choose to ride on coilovers, but this car has been given the airbag treatment. Only thing I don't like are the exhaust tips from this point of view, they look like they have been glued on. I would have placed the tips further back, so that they would align better with the rear bumper.

The view from the rear is better.  Now you can clearly see the IS-F style setup of the exhaust.  What do you guys think, do we have a winner?

I don't like the fins on the front fenders, the rear diffuser w/ the pipes is interesting I'm on the fence about that.

The rear is indeed interesting. I feel like it has some novelty right now since the IS-F is still relatively fresh, but I don't think the shelf life on this kit design is good. It is going off of too many current trends, and usually kits like this that are timely in their release often sacrifice trends for classic looks. Honestly I think that two years from now we're going to look at the rear of the car and it'll be far less interesting than it is now...and at that point it all falls back onto whether the car has a classic and timeless style. Overall I think this kit could have been better...but at the same time I've seen far worse.

As for the Z3 influenced front fenders...thats an interesting topic all together. Naturally in the US the Z3 fender style has been done to death by every cheap fiberglass maker under the sun...and when that happens the imagery of a beat up primered Geo Metro or whatever with Z3 style fenders doesnt lend it self to being cool on a VIP car. So as an American I say those are wack. Yet, those fenders in Japan dont have as bad of a tarnished reputation since they didn't get 30 companies in every magazine advertising crappy Z3 fenders for every car under the sun. Spocom hit Japan hard, but not as hard as in the US. For that reason I think Junction Produce produces Z3 type fenders still to this day, and I guess now this car has them also. So I get why they have it, but for my tastes its ugly as hell.

I cried when I saw the exhaust design...from happiness. Even if I may think they are gross soon, at the moment they are gorgeous.

ahh this car is cool and different. Nice and clean.

I don't find this car to be very appealing. I wrote an entire response and then erased it because it sounded uneducated and harsh. What I will say is that the original design of the GS is a really beautiful car. Add a nice set of wheels, a fresh kit to bring it down to Earth along with a new suspension and you've created a beautiful ride. My concerns about this vehicle is that the rear diffuser kit is just not aesthetically appealing. The stacked exhaust is interesting and will become a common trend I feel but the reason it is so beautiful on the IS-F is that they are flush and look clean with that vehicle. With the tips jutting out and unnecessary raised strips giving the kit a "diffuser" look, the overall kit looks tacky. The area between the exhaust tips is reminiscent of the wacky Japanese vans that have unnecessary aerodynamic creases and Z3 fenders. It's a beautiful car, tone down on the chrome accents and give it the justice it deserves. I will add, the front end from the shark gills forward is very very sexy.

Would agree with Pat about the rear end. Doesn't really float my boat on this particular car. Subtle but functional exhuasts would have been the order of the day.

Definitely a clean showcar. Just not my taste.

I'm getting tired of the VIP look. Kinda pointless to me now.

please dlocay@yahoo.com send me A LINK OR SOMETHING i cant find it on the web

The IS-F rear diffuser and double stack exhaust is just plain sick! I like the way the JOB Design kit flows with the GS's current body lines. What killed it for me is the Z3 influenced fenders.

Can anybody tell me what the name of the rear diffuser is and who makes it?

This looks pretty cool! I agree with the exhaust tips from the side view. They need to tuck that in more.

Nice. The new exhaust look really give it sporty look with addition to its luxury.