It may not have won at Le Mans this year, but the Corvette C6.R  has a long history of success. Corvette Racing, as we know it, made their Competition debut in 1999 in association with race engineering company, Pratt & Miller. Corvette have won the Le Mans class no less than five times and are GT1 ALMS champions for the Seventh consecutive year!

The C6.R may look like a standard Corvette Z-06, but there are quite a few differences.

The LS7R Engine is built by Katech and ends up close to 600bhp, thanks to some internal differences compared with the standard LS7 engine. This is mated to a X-Trac 6 speed gearbox. One of the strong aspects of the engine is its massive torque  (640+ lb-ft!) and the sound of the ‘vette as it passes you by. I can assure you, if you go to an ALMS race or Le Mans, you will be impressed by its sound.

For 2008, the Corvette Racing C6.R’s run on Ethanol. Although sponsored by ‘E85’ Ethanol, the team were forced to start the season with ‘E10’ variety due to wear on some engine parts. Ethanol is not allowed at Le Mans, so, although the car carried sponsorship, it ran normal gas at that event.

The C6.R suspension is similar to the roadcars, but with all new components. Brakes are naturally uprated, with Carbon Caparo-AP units, with additional brake cooling.

The racecar actually uses the C6 roadcar chassis, with roll cage added. All the bodywork is carbon fibre, which helps to keep the weight down to 2400lbs.

The C6.R has spent many hours in the wind tunnel. Unlike most companies, the race team worked with the production division of GM during development to ensure that the C6 formed the best basis for a race car. One of the most obvious changes, compared to the C5 are the deletion of Pop-Up headlamps.

The bodywork has a number of small differences to the Z-06. Starring at the front, the racecar has a unique bumper which incorporates a splitter, which creates downforce and reduces lift.

The hood includes an air outlet for hot air to escape from the front radiators, located behind the front bumper. This hot air then flows over the car, helping the air-flow to the rear wing. The front fenders have multiple slats over the wheels. This is to reduce pressure build up inside the wheel arches.

The central section may look stock, but the side sills incorporate side exit exhausts. At the rear, a large rear wing dominates the car and used in conjunction with the front splitter to provide balanced downforce. Note the curve on the rear wing, in an effort to catch the clean air off of the rear window. Under the rear bumper a large diffuser exits which helps direct air from under the flat bottom floor.

One small feature, is a small camera in the rear bumper (just below the Corvette badge). This is connected to a screen in the cockpit, which allows the driver to see behind (the rear spoiler would get in the way of a cockpit mirror)

As you imagine, it can get very hot inside, with the heat from the front mounted engine and 3 layer Nomex suit, so the Corvette engineers have developed air-conditioning which pulls air in from small air-intakes in the door mirrors( below).

A total of eight C6.R’s were built. Yes, ‘were’ as it appears no more cars will be built. Lack of competition in the ALMS hasn’t helped Corvette and the rumour is that Pratt and Miller are working on something new, Corvette wise. The ACO have recently changed some engine rules, allowing production based engines in LMP1, so its possible you could see a LMP1 Corvette at some point. One would assume this would be closed-coupe design.

The last two chassis reside with Corvette Racing. As you will have seen in our Le Mans coverage, the team run two race-cars in the familiar yellow and black livery. The livery was tweaked this year with new ‘go-faster’ stripes and the return of the black rear end.

The remaining cars are with privateers in Europe. The most well known are the Luc Alphand cars (above), which ran at Le Mans and in the European Le Mans series. Additional chassis are raced by Phoenix Racing (FiA GT), DKR (French GT) and Selleslagh (FiA GT & French GT).

Corvette should walk the ALMS GT1 championship easily this year. There only competition comes from an Aston Martin DBR9, which is privately run. As for 2009, who knows?

Corvette fans can now get even closer to owning a C6.R. Pratt and Miller are producing a limited run of C6.R based roadcars called the C6RS. Jay Leno had chassis #1, which was shown at SEMA 2008, to much publicity and includes full carbon body and many C6.R parts. 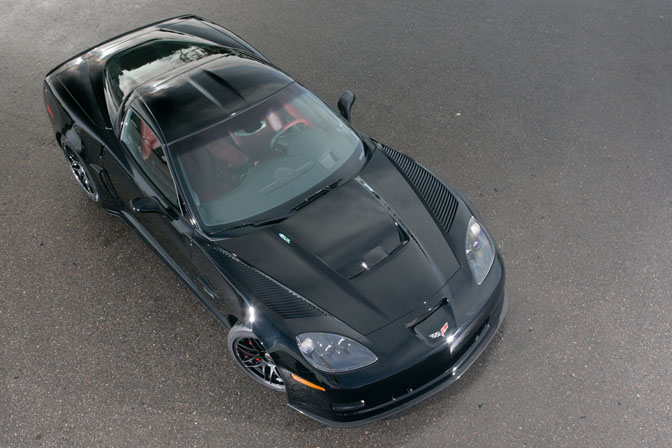 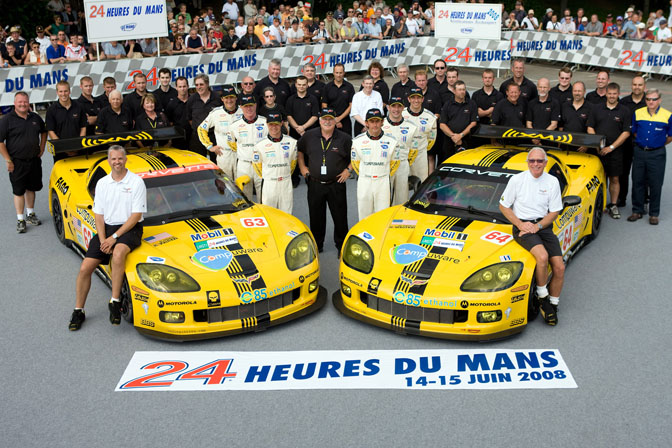 SpeedTV.com have a couple of great videos, behind the scenes at Corvette Racing from Le Mans.

Walk through of the C6.R with driver, Johnny O’Connell 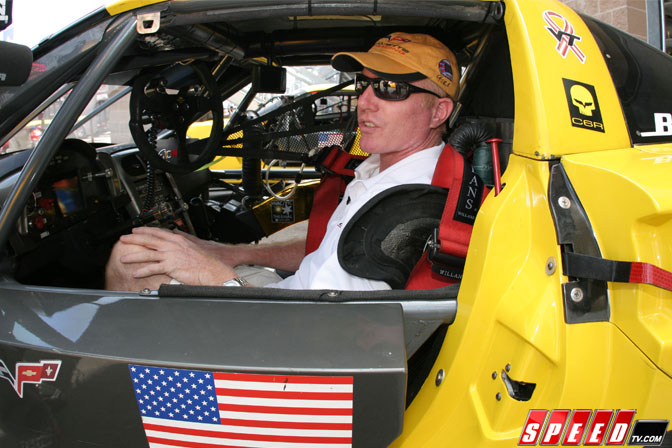 Excellent coverage ! It gave me some inspiration for my project.

As we come to the end of June, Le Mans month, I thought it was fitting that we featured the Le Mans GT1

Two days ago I drove my 2008 vet to Laguna Seca for this week end's ALMS.

With out a doubt, my excitement increased every time I saw and heard your cars sprint through the cork-screw. Your team in the stalls were patiently helpful to me and spent time answering remedial 101 questions I had. Such as, what is it going to take for me to get a fan in the tail end of my car?