Say hello to one of the toughest Nissan S30Z’s I have ever seen. This dark red Z is owned by Kuni-san of Gunma Prefecture, and when I first spotted it at the spring Omega Cup event at Tsukuba Circuit I could not keep my eyes off it! After first drooling over the car’s amazing stance, I began to notice the overall attention to detail on the car. While it’s as functional as a track car can be, it is also nice enough to rival many of the show cars I see. The majority of the classic cars you see racing at the circuit are mostly original and the drivers are out simply for the fun of driving. This car is different. Every part of the car has been built for maximum performance, which has earned the car the nickname of “Battle S30Z”.

Out on the track, the car sings beautiful inline six music and moves with thrust that you wouldn’t expect from a car over 30 years old. Although the car reaches very high speeds on the faster sections of the track, the car retains its clean lines without the use of a GT wing or other extreme aero parts. The car’s minor body enhancements seem to work well enough.

In the corners, the car’s massive SSR Professor wheels wrapped in Advan A048’s give the car all the grip it needs. To accommodate the large rubber, the car has been outfitted with a set of FRP fender flares. The doors and hood are also constructed of FRP for added weight savings.

In this shot with the car loaded up on its transporter, you can see the upgraded brakes which were sourced from an FC3S Mazda RX7. Suspension wise, modifications include a custom damper set up from ZEAL and Nismo stabilizer bars.

While most built up S30Z’s are swapping over to turbo RB power, Kuni keeps things real with a fully built naturally aspirated L-series engine that has been stroked to 3.1 Liters. All of the engine internals have been replaced with high performance components, and induction comes from a set of Solex 50’s. The exhaust system is one-off for this set up. In this photo you can also see the car’s custom twin fan cooling system. The engine is mated to an R32 Skyline transmission with an OS Giken clutch. This set up dynoed at 337ps to the wheels at a recent power check gathering. That is well over 100hp per liter naturally aspirated!

This photo taken during the car’s build shows the custom 23 point roll cage that dominates the interior. During race days, the driver sits in a single Bride racing seat. 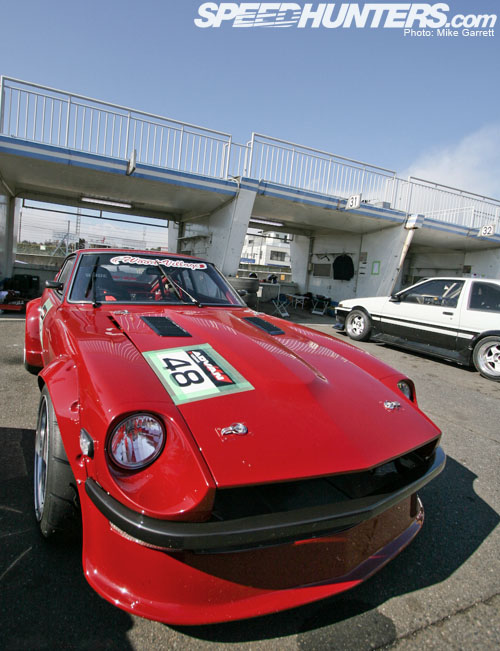 Talk about a mean looking S30. 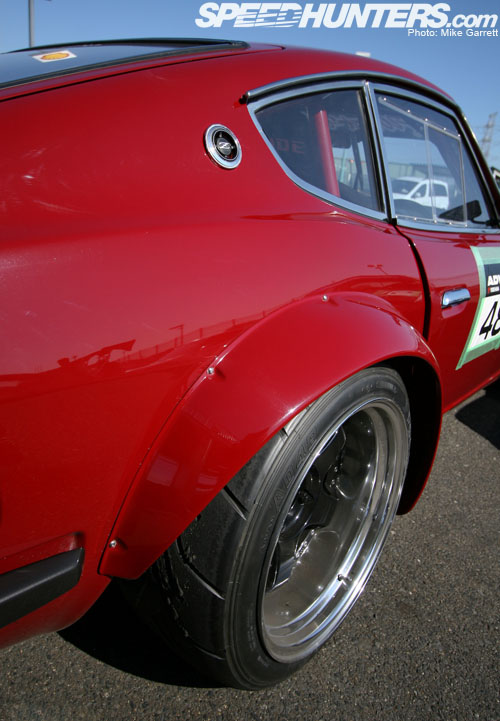 The car needs much more than the standard ZG flares to cover the giant rear wheels and tires.

So how does it run?

Not too bad for a classic non-turbo Z wouldn’t you say?

A Datsun 240Z Decades In The Making

I love this car. I'm glad you posted these pics. What size wheels and tires is it running? How much does it weigh?

Beautiful car... it sounds like it goes as fast as it looks.

I keep going to the Redmegaphone site and teasing myself with some of the Zs they have for sale there.

One day I will be rich enough to go to Japan and bring a Z car back to the UK on the return journey.

thx for the addiction, brethren. The Z will always hold its own on the tarmac, Udig?

gorgeous, I love those Zs yo, the stance, the flares, and its engine must sound crazy........nice!!

I want to hear it. Any video/audio clips???

beautiful car and incredible craftsmanship, if only...

this is what i love to see. oldskool japanese cars that have been modified but still keep some of the oldskool look well beside the wheels. a very nice z.

OMG !!!!!! Look at that cage ! Is it serious or what? Look at the front strut tower, talking about gusset, they're EVERYWHERE !

OMFG... that's definitely the coolest, meanest, most extreme Z I've ever seen. Everything's right - the colour, the stance, the mods, just everything.

MIke, Any chance of getting a video of this beast in action? Would love to hear it growl down the straight!

WTF! Check out the chassis work! I can hear the motor when I close my eyes!

Wow. That car looks brilliant and well-modified. I like the bodykit,similar to the one on the Devil Z in Wangan Midnight. Kudos do Kuni-san for building a remarkable car.

Sexy, I wish Best Motoring or Option would do a video on tuned S30s, a Tsukuba battle or one on the touge.

how would i get that exact color for my 280zx?

REALLY INTERESTING THE WAY HE HAS REMOVED THE RADIATOR CROSS BRACE TO ACCOMODATE HIS CUSTOM COOLERS ~ WITHOUT SHOCKTOWER BRACES, I WONDER HOW MUCH FLEX THE FRONT BODY GETS UNDER STRESS? ALSO, WHY NOT THROW A PAIR OF HEADLAMP COVERS ON THE CAR FOR BETTER AERODYNAMICS? (IT CERTAINLY APPEARS HE COULD AFFORD THEM!)

hope can own one whn i can afford it

and will change to L28 for real

ARE THE FLARES IN THE REAR CUSTOM OR PURCHASED SOMEWHERE?

Would you happen to know what crank it has for the 3.2 now? Kameari?

izzy_ortiz
Kameari's crank is 85mm - He indicates it's a ASW86mm, full counterweight crank on his website, but not a source.
Google "Battle s30z" for details of his build!